Brummies celebrate Holi, the Festival of Love and Colours 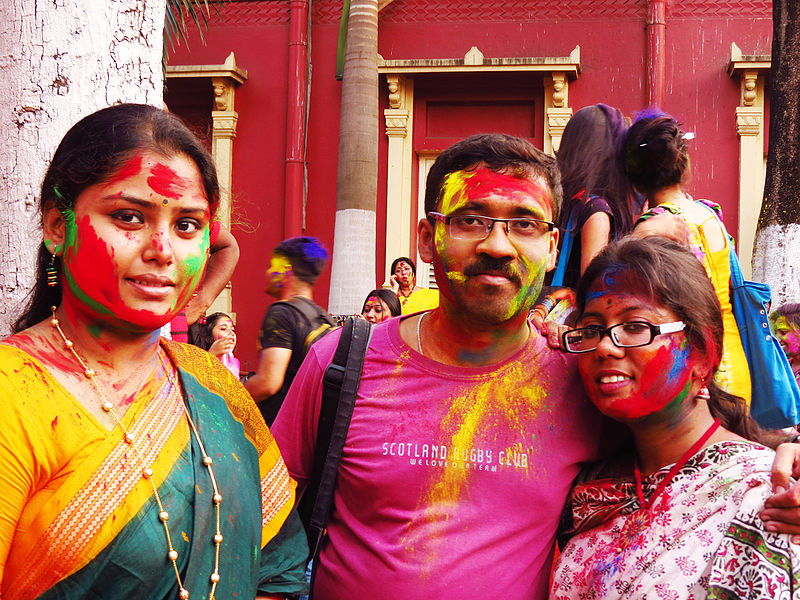 Hindus, Sikhs, Jains and Buddhists across Birmingham are celebrating Holi today, with festivities involving a lot of colourful chaos taking place across the city.

Many began celebrations of the ‘Festival of Colours’ over the weekend in temples, homes and community centres across the Midlands; getting together to share love and joyful spiritual expressions of unity and forgiveness.

Yesterday, the Shree Geeta Bhavan Hindu temple in Birmingham hosted the faithful as they marked the occasion with food, music and coloured powder.

Attendee Vimal Korpal joined worshippers and participants as they welcomed spring and the triumph of good over evil, with welcoming smiles and handfuls of rainbow powder.

“There’s lots of energy, lots of sharing, laughter, good wishes and most importantly, lots of chasing and splashing people with colour,” he explains.

“There is also the sacred fire of Holi, which burns amidst the chanting of specific mantras, which are intended for the destruction of demonic forces.”

Holi is the Hindu festival of colour and of love. Mostly recognised by the bold displays of coloured powder, the celebration signifies the victory of good over evil and the arrival of spring. The festive day is an opportunity for socialising, forgiveness, forging fresh relationships, and sharing happiness with others.

An ancient Hindu religious festival, it is also celebrated by Sikhs, Janins and Buddhists and has been adopted as a spring celebration of love, frolic, and colours. It takes place over two days, and is also a celebration of fertility.

The timing of Holi is based on a lunar calendar, so the dates of each celebration varies every year. This year, the festivities began on Sunday 12th March and end on the evening of Monday 13th March.

How do people celebrate Holi?
.

People across the globe take part in Holi all around the world, but mass celebrations are concentrated in India and Nepal.

Holi is traditionally celebrated in two parts. The first day is known as Holika Dahan and the second as Rangwali Holi.

During Holika Dahan, the night before Rangwali Holi, wood and dung-cakes are burned in a symbolic pyre to signify good defeating evil.

Why is Holi celebrated?
.

Holi draws on ancient Hindu mythology, marking the burning of the devil Holika as well as the legend of Radha and Krishna. According to tradition, Krishna loved Radha but became self-conscious about their different skin colours. So, on his mother’s suggestion, he playfully painted her face so it would match his skin tone. Based on this, lovers often celebrate Holi by colouring their faces the same hue during the festival.

Colourful ‘powder fights’ aside, Holi is a time for friends and families to get together and have fun, and unite with others, regardless of their caste or ethnicity. In India, some more religious group celebrate Holi for 16 days.

How is Holi being celebrated in Birmingham?
.

In Birmingham and the West Midlands, most of the Holi activities are being held at prominent temples and community centres across cities with large Hindu and Sikh populations. These include the throwing of coloured powder, food and music, religious and spiritual services and families getting together for the special occasion.

Many temples, like the Shree Geeta Bhavan Mandir, will have had celebrations yesterday so as not to clash with Monday working hours, but many may still be holding events throughout the day.

There are also charity and commercial events throughout the year that adopt or embrace the coloured powder elements of Holi but are usually not in any way connected to the festival’s spiritual or religious roots.

What is Hola Mahalla?
.

Hola Mahalla is a one-day festival celebrated by the Sikh community. It takes place a day after Holi and sometimes coincides with the Sikh New Year.

A big festive event for Sikhs around the world, it is traditionally a three-day celebration (sometimes stretching to a week-long), with large particpating communities setting time aside for activities including camping, bravery displays and listening to kirtan, music, and poetry.

As an integral part of Sikhism and the activities of a Gurdwara, large pots (known as Langars) are set up to provide free vegetarian meals for visitors and attendees too.

Hola Mohalla is celebrated across the world, with variations for local observances.

(Visited 577 times, 1 visits today)
https://www.iambirmingham.co.uk/2017/03/13/brummies-celebrate-holi-the-festival-of-love-and-colours/https://www.iambirmingham.co.uk/wp-content/uploads/2017/03/holi-festival-partho72.jpghttps://www.iambirmingham.co.uk/wp-content/uploads/2017/03/holi-festival-partho72-220x140.jpg2017-03-13T13:40:38+00:00Staff ReporterEventsWhat's OnBirmingham,Celebration,Colour,Colours,Faith,Festival of Colours,Festival of Love,Hinduism,Hola Mohalla,Holi,religion,Shree Geeta Bhavan Mandir,Sikhism,Temple,Vimal KorpalHindus, Sikhs, Jains and Buddhists across Birmingham are celebrating Holi today, with festivities involving a lot of colourful chaos taking place across the city. Many began celebrations of the 'Festival of Colours' over the weekend in temples, homes and community centres across the Midlands; getting together to share love and joyful spiritual...Staff ReporterStaff Reporter[email protected]AdministratorI Am Birmingham
« OPINION | Vimal Korpal | Holi, the ‘Festival of Love’
Thousands line Brum’s Emerald Mile for St Patrick’s Day parade »