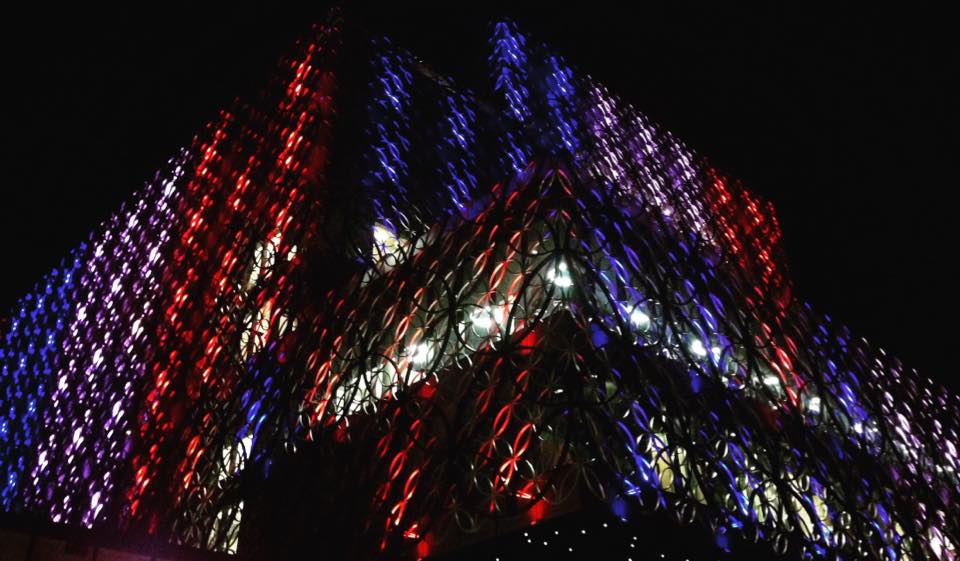 The Library of Birmingham has been lit up in the colours of the Union Jack tonight, in tribute to the victims of today’s tragic London attacks.

The Birmingham landmark is illuminated in red, white and blue this evening to show solidarity with the Capital, after five people have died and 20 people have been injured following a violent stabbing frenzy near the Houses of Parliament.

Reports of policeman stabbed in grounds of #Westminster and a car hitting pedestrians in #London on bridge or side parliament #prayforlondon pic.twitter.com/kzkkkyyD9g

According to witnesses, the armed attacker ran towards Parliament with a knife, where he came face to face with police officers. The assailant then confronted an unarmed officer, stabbing and killing him. In response, the attacker was shot dead by nearby armed officers.

The attacker, the victims and those in intensive care had not been initially identified.

On high alert and as a precautionary measure, Parliament was suspended and most visitors to the buildings were locked in for about five hours.

As Londoners and visitors to the city come to terms with the incident, solidarity is being shown across the country.

In Birmingham, the city’s landmark library is paying tribute by displaying the colours of the Union Flag, known as the Union Jack and recognised as the flag of the United Kingdom.

The move follows a request made by city councillors to the Library to mark the tragedy, to show solidarity and express a firm stance against all forms of terror.

“We have lit the Library of Birmingham in the colours of the Union Jack to show solidarity with London. All of us stand together against those who preach division, hatred, and terror. We will never be cowed by terrorists whoever, and wherever they are.”

“My thoughts and prayers are with the victims of the horrific attack in Westminster, London.

“My heart goes out to the emergency services who are working tirelessly helping the injured, and keeping us safe in these difficult times.

“Solidarity against all those who preach, division, hatred and terror.”

The councillor concluded his statement with a quote from the Qur’an, the Muslim holy book:

Birmingham MPs working in and around Parliament used Facebook’s ‘Safety Check’ feature to mark themselves as ‘safe’.

Members of Parliament Steve McCabe (Birmingham Selly Oak) and Khalid Mahmood (Birmingham Perry Barr) checked in to show they were safe, while MP Jess Phillips (Birmingham Yardley) posted to let her online friends and followers know she was “okay”.

As the day unfolded, Phillips praised the emergency services for their swift response to the chaos in Westminster:

“The admiration I have for the people who work here to keep us safe is boundless. I’m so sorry for them today.

“To lose a colleague and friend in line of duty is so painful, to get straight back up and keep serving under fire and pressure makes you a hero.

“As we walked from Parliament today there were no words that seemed good enough for the police and security staff who lined our safe passage.”

Distressing scenes from Westminster – BBC referring to as terror incident. Thoughts & prayers with those affected & with emergency services.

Leader of Birmingham City Council John Clancy described the scenes in London as “distressing”. Sharing his thoughts on Twitter, he wrote:

“Distressing scenes from Westminster – BBC referring to as terror incident. Thoughts and prayers with those affected and with emergency services.”

“The Library of Birmingham lit to show Birmingham’s solidarity with London. Our thoughts are with everyone affected by today’s Westminster attack.”

In March last year, the library was lit up in green and white to remember the victims of a terrorist attack which killed 70 in Pakistan, and was also enveloped in the colours of the Belgian flag following terror attacks in Brussels in the same month.

In November 2015, the French tricolore was on display following terror attacks in Paris, France, during which bomb blasts and gunmen took the lives of 129 people.

At the time, similar displays of sympathy and solidarity were also shown by other city landmarks including the Birmingham Central Mosque in Highgate and the The Guru Nanak Sikh Temple in Smethwick.

(Visited 464 times, 1 visits today)
https://www.iambirmingham.co.uk/2017/03/22/library-of-birmingham-lit-up-in-tribute-to-victims-of-london-attacks/https://www.iambirmingham.co.uk/wp-content/uploads/2017/03/london-attacks-westminster-terror-attack-march-2017-libary-of-birmingham-tribute.jpghttps://www.iambirmingham.co.uk/wp-content/uploads/2017/03/london-attacks-westminster-terror-attack-march-2017-libary-of-birmingham-tribute-220x140.jpg2017-03-22T23:37:28+00:00Staff ReporterNews2017,22 March 2017,Birmingham,Jess Phillips,Keith Palmer,Library of Birmingham,London,London Attack,London Attacks,Majid Mahmood,MPs,Parliament,Stabbing,Terror,Terror Attack,Terrorism,Tribute,Violence,WestminsterThe Library of Birmingham has been lit up in the colours of the Union Jack tonight, in tribute to the victims of today's tragic London attacks. The Birmingham landmark is illuminated in red, white and blue this evening to show solidarity with the Capital, after five people have died and 20 people...Staff ReporterStaff Reporter[email protected]AdministratorI Am Birmingham
« Brummies urged to unite against child sexual exploitation
Anti-terror police raid Birmingham flat following London attacks »