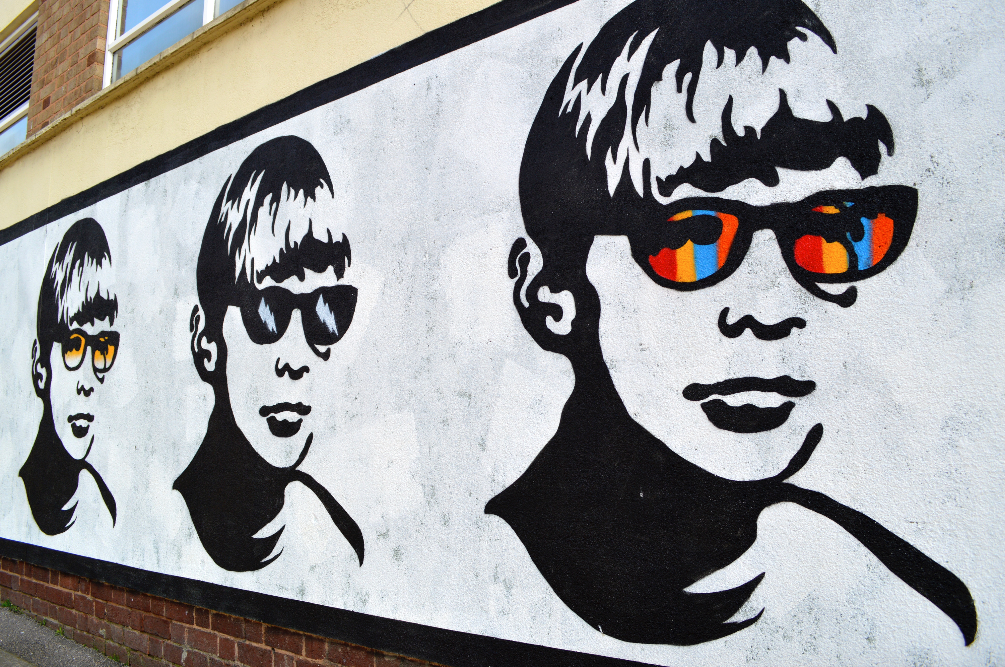 The popular piece of art in Lower Essex Street, by artist 'Golden Boy', has been painted over as part of renovation to the building on which is was featured. Photo: Olly MacNamee

Stroll down Lower Essex Street this morning and, other than the usual gloomy summer weather confronting your commute into the city centre, you may also have notice the brutal removal of Golden Boy’s set of stencilled bespectacled faces that have adorned one particular building these past few years.

Golden Boy is one of a group of Birmingham street artists who have helped turn Digbeth, and the surrounding area, into a bejewelled borough of Brum Town to be proud of.

A virtual street side art gallery that stands proudly shoulder to shoulder with cities more renowned for their support of such artist aspirations, such as Bristol and that there fancy London.

Where once stood rundown redbrick buildings that still house much industrial endeavours, thanks to the likes of events such as The City of Colours, Birmingham has become a colourful canvas that can be admired by all. Art that all can see, and not hidden away in some oligarch’s mansion or in the bowels of some dusty museum.

The 'Golden Boy' #StreetArt mural in Lower Essex St. has been painted over by property owners, who are renovating the building. #Birmingham pic.twitter.com/azQ9LcQz3z

But why the fuss about the disappearance of one such piece? Well, clearly someone at some point thought it a good idea to hire Golden Boy to decorate their otherwise drab building.

Utilising his usual ironically angelic face – based on a schoolboy image of the infamous serial killer, Jeffery Dahmer no less – this series of minimalistic portraits, all sporting a slight difference in their design, was a much needed injection of style into a part of Birmingham not known for being the cleanest of areas.

Talking to workers in the area this morning it would seem the building is up for lease and so, one can surmise, the need to remove this piece, in the same way I saw swathes of Banksy art being done away with during my time living in Manchester and the inevitable gentrification that came about as a result of the Manchester bombings back in 1996.

And, while Golden Boy is nowhere near in the same league as Banksy, it does make you wonder. Wonder whether Birmingham, and its individual landlords, can even contemplate a long-term plan to at least attempt to preserve this heritage.

Should Golden Boy, even a whole swathe of talented artists for whom the London spotlight never seems to shine, become as successful as their art suggests they could be and should be, what then? Where will we find their earlier works? Or even the work they’re commissioned to produce? Where’s our civic pride I wonder?

Arts funding has sadly been depleted by one arm of the current government, while schools and academies are savagely cutting the arts from their curriculum, as created by a second arm of government. They’re certainly ambidextrous when it comes to killing the arts, I’ll give them that.

Or, have we all fallen for the belief that bland, blank and beige buildings are what people want because of years of being told by the likes of Philip and Kirsty off of the telly that’s what people want.

Gentrification is coming, there is absolutely no doubt about it (just look at Bradford Street and the anti-graffiti corporately clad boards that were once adorned with art and tell me public spaces for such things aren’t decreasing), but does it always have to come in one flavour; vanilla?

Or, have the landlords simply been tipped off to the origins of Golden Boy’s muse, I wonder? And if so, so what? This is not a glorification of one man’s murderous ways, but rather a tongue-in-cheek joke to those in the know. People like you now too.

Anyway you look at it, it’s a crying shame that it’s gone. Like so many others. Yes, the nature of street art can be one of transience, but why should it be? Why should great, up-and-coming artists  – many who do create more permanent records of such work through prints, t-shirts and other such paraphernalia – believe this to be the accepted status quo?

Street art has evolved, but not necessarily the ideology behind it. Certainly, if I’d been commissioned to do such a piece, I’d expect to last a bit longer than a few years, right? After all, the JFK mosaic at the bottom of Floodgate Street is still around. And that was commissioned way, way back in 1968, by the Irish community of Birmingham. And, when that was looking tired and knackered, a newly minted version was recreated in 2012 – 2013.

If we can preserve the memory of a Mafia-linked womanising President (and, no, I’m not talking about Trump) then surely we can try and keep the better pieces of street art from being literally and figuratively whitewashed from Brum?

Before and after (thanks for the pic, Adam). There goes the neighbourhood.

For more on what Birmingham has to offer check out my online fanzines here, here and here, which now stands more as a historical record; not my original intent.

Still, I’m glad I’ve taken so many photos of so many great works of art over the years I’ve called Birmingham my home.