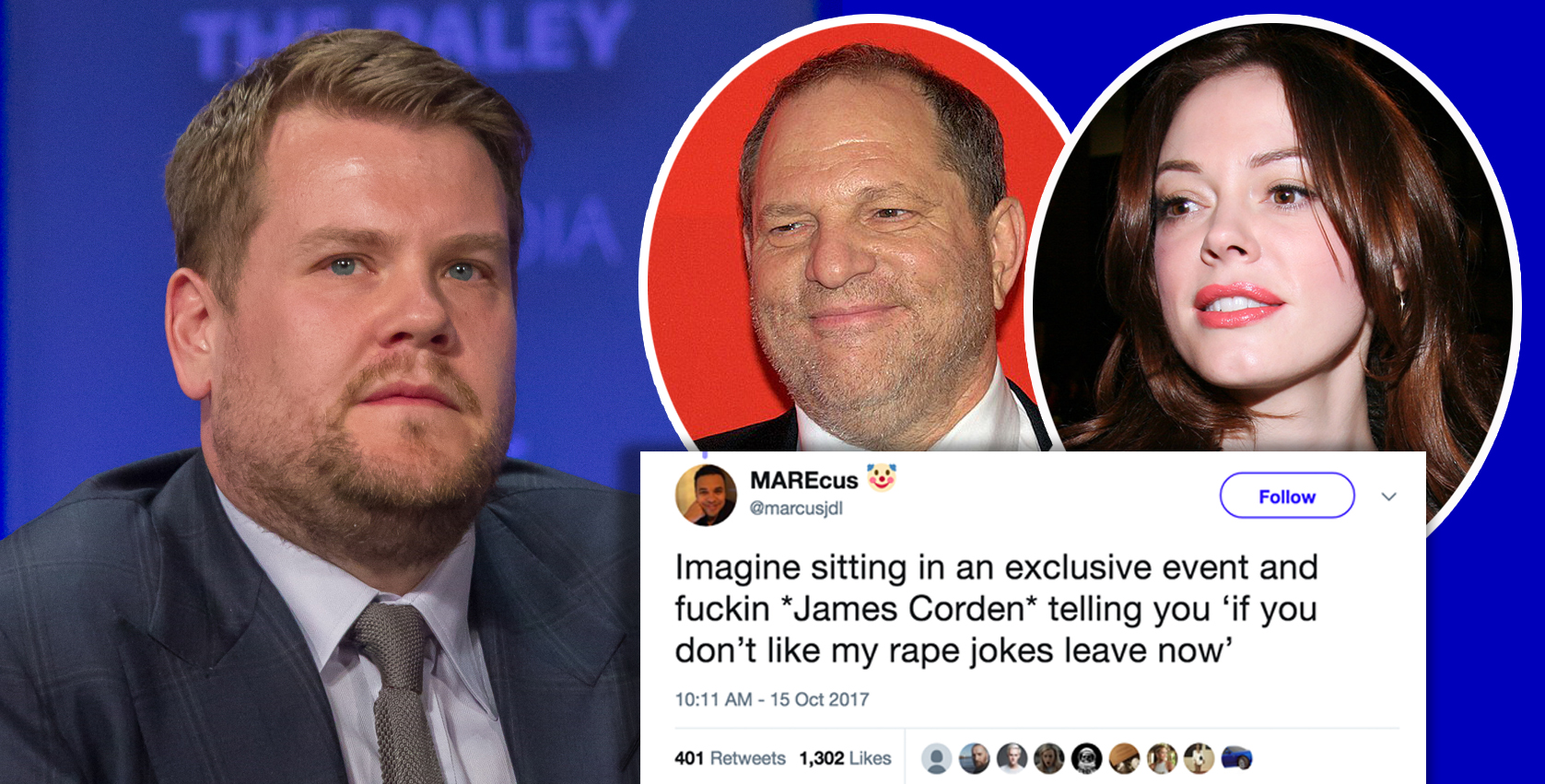 British comedian and US chat show host James Corden has received a barrage of criticism and condemnation after delivering a series of ‘rape jokes’ at a charity event in Los Angeles.

During an amfAR (The Foundation for AIDS Research) charity gala , Corden joked: “It’s been weird this week watching Harvey Weinstein in hot water. Ask any of the women who watched him take a bath, it’s weird.”

The joke was preceded by: “It’s a beautiful night here in LA. So beautiful, Harvey Weinstein has already asked tonight up to his hotel to give him a massage.”

Corden’s gags about Hollywood producer Harvey Weinstein – who is facing rape, sexual assault and sexual harassment claims – appeared to fall flat as audience members weren’t sure whether to laugh or groan.

There was an immediate backlash after footage of The Late Late Show host’s comments was circulated online.

Actress Rose McGowan – who on Thursday publicly accused Harvey Weinstein of raping her – angrily responded to Corden’s routine, calling him a “motherfucking piglet” and harshly criticising audience members who found his jokes funny:

2) Hearing the audience’s vile roars & laughs show EXACTLY what kind of HOLLYWOOD you really are. https://t.co/HBqNxnpr7N

McGowan is one of over 30 women who’ve come forward since the New York Times revealed sexual harassment, rape allegations and subsequent pay-off claims against Weinstein, which reportedly go back decades.

Following Corden’s ill-conceived comments, social media has lit up with responses questioning the appropriateness of his material, in light of recent events:

What utter bullshit. Plenty of decent comedians don’t make fun of suffering. Sexual assault is not a punchline.

Following the outcry, Corden apologised on Twitter, stating he “was not trying to make light of Harvey’s inexcusable behavior”:

To be clear, sexual assault is no laughing matter. I was not trying to make light of Harvey’s inexcusable behavior, (1/2)

but to shame him, the abuser, not his victims. I am truly sorry for anyone offended, that was never my intention. (2/2)

Following criticism for Weinstein jokes, James Corden says sexual assault is “no laughing matter”, which is why it featured in his routine.

He’s always been an unfunny, arrogant prick. Patrick Stewart should’ve headbutted James Corden when he had the chance. pic.twitter.com/9HjCU0i0p1

Although Harvey Weinstein has denied the recent allegations of non-consensual sex, he has since been fired from his production company, expelled from the Academy of Motion Picture Arts and Sciences; and his wife Georgina Chapman has left him.

(Visited 1,407 times, 1 visits today)
https://www.iambirmingham.co.uk/2017/10/17/james-corden-slammed-unfunny-arrogant-prick-following-weinstein-rape-jokes/https://www.iambirmingham.co.uk/wp-content/uploads/2017/10/James-Corden-Harvey-Weinstein-Rose-McGowan-1024x520.jpghttps://www.iambirmingham.co.uk/wp-content/uploads/2017/10/James-Corden-Harvey-Weinstein-Rose-McGowan-220x140.jpg2017-10-17T21:30:36+00:00Staff ReporterNewsShowbizWomxnamfAR,charity event,condemnation,Criticism,Harvey Weinstein,Hollywood,host,James Corden,jokes,rape joke,rape jokes,Rose McGowan,Showbiz,Social Media,The Late Late Show,TwitterBritish comedian and US chat show host James Corden has received a barrage of criticism and condemnation after delivering a series of 'rape jokes' at a charity event in Los Angeles. During an amfAR (The Foundation for AIDS Research) charity gala , Corden joked: 'It's been weird this week watching...Staff ReporterStaff Reporter[email protected]AdministratorI Am Birmingham
« World’s biggest YouTubers headed to Birmingham for ‘Woodstock for the digital age’
The Vamps are back in Birmingham for HelloWorld Live »