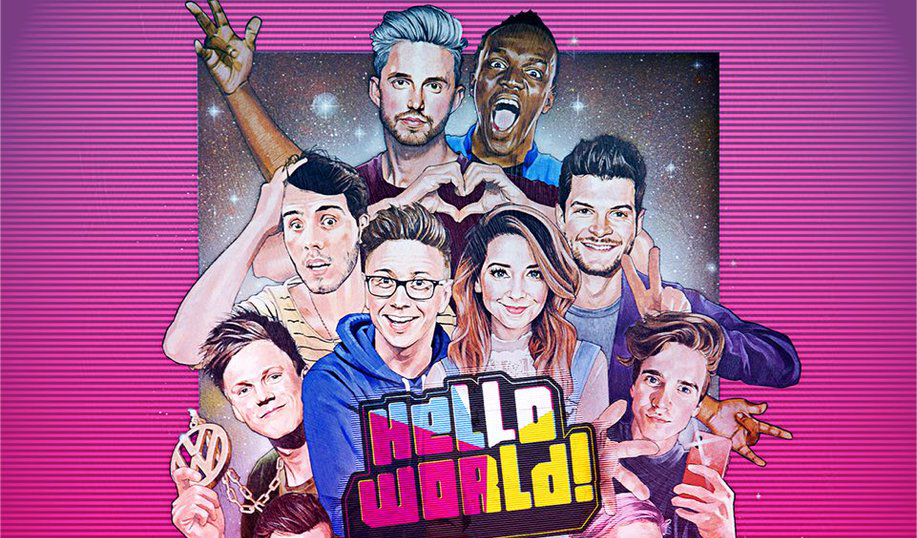 Some of the world’s most famous YouTubers are in Birmingham this weekend for live interactive weekender HelloWorld.

HelloWorld is an epic four-hour, immersive live show, with two identical separate performances on the 28th and 29th October at the Birmingham Genting Arena, bringing the world’s biggest social media talent and their fans together under one roof for an unforgettable, shared experience.

Fans can also kick back and relax in a deck chair on the beach whilst watching live bands, including Over Atlantic, The Shades, New Hope Club, and a special one-off performance from The Vamps!

Alfie Deyes (aka Pointless Blog) is a daily vlogger with a love for all things technology, gaming and having fun. Alfie is the bestselling author of three books, Pointless Book 1 & 2 and The Scrapbook of my Life, with the third in the Pointless series coming out this summer. He has a passion for merchandise and at the end of 2016 launched The Creator Store, a hub for creators to develop, create and house their merchandise.

South African Caspar Lee has an inbuilt spirit of adventure, which is infectious on screen. His self-titled book was a Sunday Times bestseller and his quirky celeb interviews have attracted collaborations with Cara Delevingne, Ed Sheeran and Kevin Hart. He has amassed over 700 million YouTube views, is a regular ambassador for Stand Up To Cancer and Comic Relief, and was this year’s International Live Stream host for the Brit Awards.

Jim Chapman is one of YouTube’s most influential faces, with a combined social media outreach of over 5 million people and more than 95 million unique views. As one of the UK’s top vloggers, Jim’s significant online presence has led him to become an authoritative voice on online culture. The Daily Telegraph regards him as ‘the new golden boy of fashion’. Jim has recently been immersed into the world of presenting, from hosting red carpet events to ‘Rise of the Superstar Vloggers’ with the BBC.

Prankster and cheeky chappy Joe Sugg, stopped thatching roofs in the West Country to become a full time YouTuber. From YouTuber Whispers to the Electric Shock Ball Challenge, he’s never short of a new video idea that will take YouTube by storm. Joe is the biggest British male vlogger, with nearly 8 million subscribers on his pranks and comedy channel, ThatcherJoe. His graphic novel, Username:Evie, is the fastest selling graphic novel since records began.

You will be hard pushed to find a 14-24 year old male in Britain who doesn’t watch JJ’s videos. Known for his Fifa, football, music and comedy content on YouTube, KSI has already amassed over 20,000,000 subscribers on his 2 channels and over 3.5 billion video views.

Plus with over 2 million twitter and 2 million Facebook fans, he is a modern day social media superstar, often topping combined social media influence and popularity metrics as the UK’s most popular entity globally. In the recent US entertainment magazine Variety survey of popularity and influence amongst US teens, KSI positioned 1st. above all stars of Hollywood, Sports and Music.

Following the huge success of his first single Lamborghini, which has reached 70 million views on YouTube and charted in the UK official Top 20 without a label, the world of music has quickly switched on to KSI.  2016 saw his debut EP ‘Keep Up’ enter the iTunes Album charts at number 1 and sold out European tour. The multifaceted YouTuber has plans for new music and tour dates across the UK.

Louise Pentland is a lifestyle and beauty blogger, vlogger, author and fashion designer. Her two YouTube channels have a total of over 3.7 million subscribers and her debut book; Life with a Sprinkle of Glitter was a Sunday Times bestseller. 2017 sees her turn her hand to fiction writing with the release of her debut novel, Wilde Like Me. She is also a champion for Gender Equality and female empowerment and in 2016, she was a United Nations Change Ambassador for Gender Equality.

Marcus Butler has a combined audience of over 6 million subscribers on his hugely successful and hilarious YouTube channels. He has released a number one bestselling book and has started his own food box service, delivering healthy snacks to the masses.

Along with Alfie Deyes, Marcus recently held a regular appearance on Ant and Dec’s Saturday Night Takeaway and is the first within the YouTube space to participate in BBC One’s Celebrity Master Chef. To add another string to his bow, Marcus started his Podcast, ‘Lower Your Expectations’, last year alongside his friend Matt Viney. Through their directionless chit chat, they take you behind the curtain of their daily lives, revealing what it’s like to be a YouTube personality.

With over one million YouTube subscribers between them, Rose & Rosie have become known for their unique brand of comedy, banter, and fun building an extremely loyal fandom along the way.
The pair were married in March 2015 and, as well as building a huge online following, have found mainstream success and acclaim as regular BBC Radio 1 guest hosts as well as appearing with comedian Russell Kane in BBC THREE TV Comedy show “Stupid Man, Smart Phone”.

Their content ranges from the hilarious chitchat videos between them to ‘Let’s Play Games’ series to the more serious #RealTalk, and they even put out the video of their stunning wedding, which has been viewed over a million times – it’s no wonder they have attracted such a huge and loyal following.

Zoe Sugg (aka Zoella) is a lifestyle, fashion and beauty blogger and vlogger, Sunday Times bestselling author, the owner of Zoella Beauty & Zoella Lifestyle and a charity ambassador. Her positive, quirky personality and engaging style of content has resulted in Zoe becoming the UK’s most subscribed to female creator on YouTube. She has 11.8m subscribers and over a billion views across her two YouTube channels since launching on YouTube over seven years ago.

Her channels ‘Zoella’ and ‘More Zoella’ regularly feature daily vlogs, hauls and beauty recommendations. Over the last 3 years, Zoe has published three novels in her bestselling Girl Online series, launched the internationally available Zoella Beauty as well as the newly launched Zoella Lifestyle brands and starred in the Comic Relief special of the Great British Bake Off.

Jake Mitchell, the 17-year old from Hereford first began uploading clips to YouTube in late 2013 and is one the hottest emerging online video creators. He has already amassed a whopping 1.4m followers on YouTube and tripled his audience in the last 12 months alone across several platforms, with many of his YouTube posts regularly receiving over a million views.

Niki & Sammy are known on YouTube for their punchy and self-depreciating humour, are everyone’s favourite British twins (if you ignore all the others.) Their videos regularly feature vlogs, comedy, failed cookery, KPOP, their hilarious and viral reaction videos and their general amusing antics as make being siblings on YouTube look a lot less cool.

JanaVlogs was born in Jeddah, Saudi Arabia and raised in London, England. Through her English and Arabic channel she shows how she balances her two backgrounds, documenting her unique perspective by sharing her life stories. She also allows her followers to see her interest in connecting with people around the world. Jana strives to make videos that make people laugh, smile and learn something new.

Josh Pieters’ primary focus is to entertain. In front of the camera, he has taken the internet by storm with his comedic sketches, games and pranks, but behind the scenes, Josh also utilises his passion for format development to produce hit shows such as Comedy Central’s online series ‘Josh Investigates’.

Katie Pix is a London based YouTuber, who cooks up content for happy tummies every week. From lifestyle vlogs to quirky challenges, kitchen hacks to indulgent recipes, Katie knows good food that’s all fun and zero fuss!

Brighton born (but London living) Jack Maynard is an entertainer through and through. Before his YouTube career took off he was a TV presenter, and he now hosts a Capital radio show with his brother, Conor. He is passionate about DJing, music and fashion.

Known online as Lookingforlewys, is an 18-year-old beauty chameleon who injects loveable sass and wit into his make-up tutorials, making him one of the most entertaining beauty gurus to hit the internet. From makeup hauls to product reviews, beauty challenges and tutorials, with the occasional splash of fashion, LookingforLewys is a must-follow!

Speaking about coming to Birmingham, he said: “I am so excited to be part of Hello World this October! Finally I can meet my viewers properly. The attention to detail planned for this event is incredible- it’s going to be so fun!”

Lucy and Lydia – Loveable duo Lucy and Lydia are crazy for all things beauty, fashion and music related! They regularly feature their hugely popular get the look videos which cover some of their favourite music artist looks.

Tyler Oakley is an independent creator on YouTube, one of the largest digital platforms to date. With over 7.5M+ subscribers on YouTube and over 23M+ across his social media platforms, he has been established as one of the most influential LGBTQ+ vloggers and is an A-Lister in the digital age. Tyler has gone on an international Slumber Party themed tour, was on the New York Times Bestseller List for his book BINGE and released his documentary, SNERVOUS.

Among his many accomplishments, Tyler has been a consultant for both the President and the First Lady of the United States on using digital platforms to connect with youth, raised over $1M for The Trevor Project, has been nominated and won numerous awards.

He was also named one of Time Magazine’s 30 Most Influential People on the Internet and included in The Hollywood Reporter’s Top 25 Digital Stars list two years in a row and is on this year’s Forbes 30Under30 list.

Famous for being an Olympic diver, Tom Daley has amassed a huge social media following in recent years, creatively utilising his YouTube, Snapchat and Instagram platforms. With 520k subscribers on his YouTube channel and over 54 million views, Tom is well on his way to being an internet influencing powerhouse.