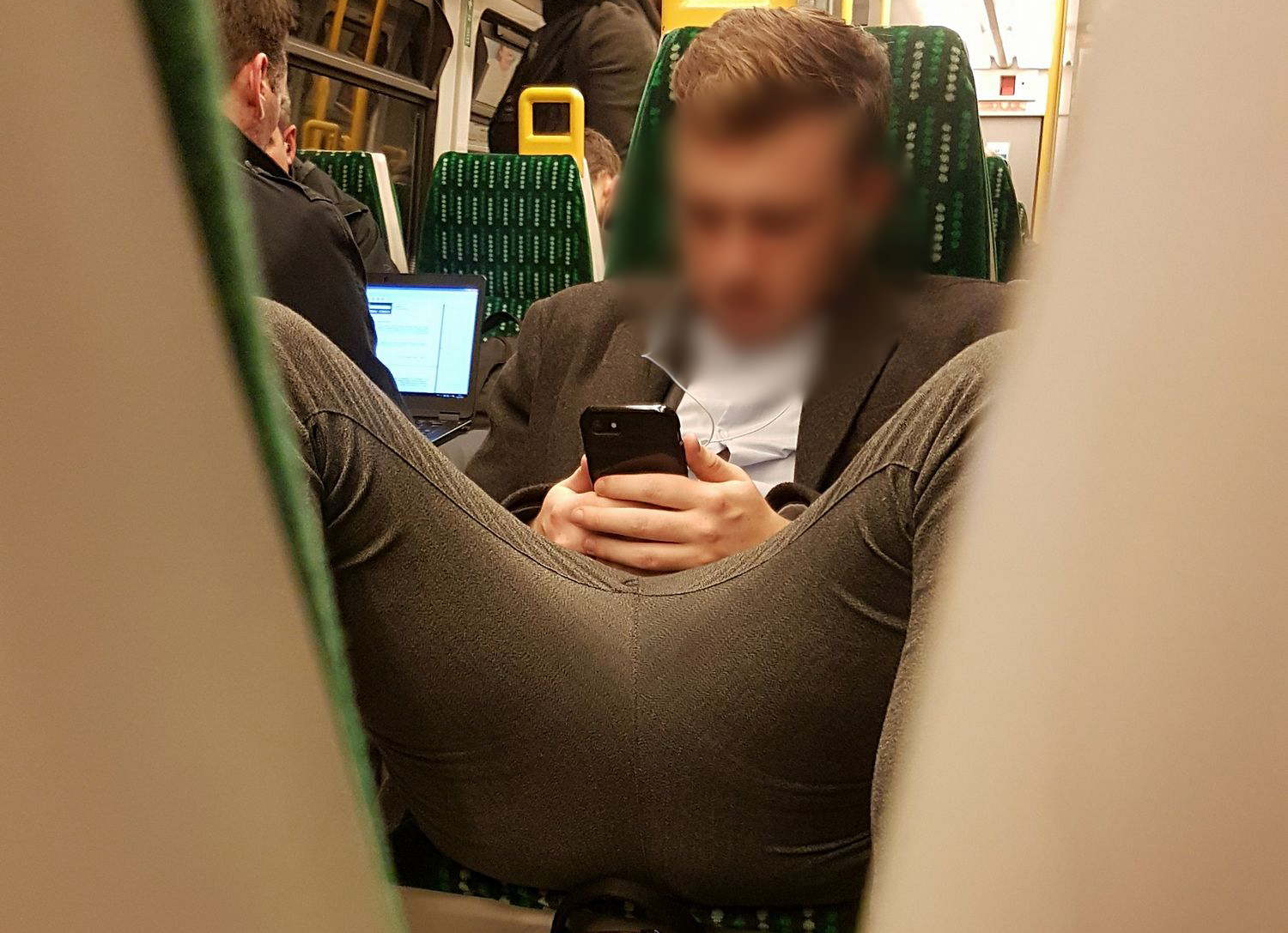 A passenger on a Midlands train took ‘manspreading’ to a whole new level recently after being captured deeply slouched into his seat while with legs spread far and wide across two additional seats.

The young man, immersed in his phone with earbuds plugged in, was photographed by a fellow passenger who found his extreme position and spread perplexing.

According to Oxford Dictionary, “Manspreading” – or man-sitting – is commonly known as “the practice whereby a man, especially one on public transportation, adopts a sitting position with his legs wide apart, in such a way as to encroach on an adjacent seat or seats.”

Posting the image to Facebook, the passenger who took the photo wrote, “I’m not usually one for taking pictures of random people’s gooches, but this manspreading is ridiculous! How is that even comfortable?!”

The image was snapped on a late-night Cross City line from Birmingham to Lichfield.

Speaking to I Am Birmingham, the passenger added:

“It’s disgusting and selfish! Also, putting your feet on seats is a contravention of a railway bylaw! ”

The responses to the Facebook post were equally as taken aback, with some seeing the funny side:

In August, London Midland launched new regulations reinforcing old bylaws, in response to complaints from train passengers about passengers putting their shoes and feet on seats.

According to the train operator, the crack down is in response to an abundance of complaints from other passengers and sees those caught reported, cautioned and potentially prosecuted in court.

Head of revenue protection and security at London Midland, Darren Hanley said: “The railway bylaws have always existed but for many years they have fallen out of focus by most train companies.

“There is a strong link between low levels of antisocial behaviour and ticketless travel. Our passengers have the right to travel and feel safe with us. By enforcing the railway bylaws we can stop problems before they escalate into something worse.”

London Midland staff have since been handing out cautions to any passengers putting their feet on seats, smoking e-cigarettes and riding bicycles on train station platforms.

“Nobody likes dirty or wet seats, please keep your feet on the floor. Please remember, this is an offence under the Railway Byelaws. We want to keep the train environments as clean and pleasant as possible. Would you want to sit on a dirty or damaged seat?

“Putting your feet up on the seats degrades the train seats condition for other customers. It can also impact on the comfort of others, not all customers feel confident to ask people take their feet off of seats in order to sit down themselves.”

“Manspreading”, on the other hand, isn’t illegal, but does still leave many divided on the issue; with some feeling the phrase itself is problematic, while others feel challenging the behaviour is a feminist issue.

Terminology aside, the practise of extreme spread amongst men (and not uniquely so) continues.

On my 64 bus. Don't know if this is manspreading or manfootwiping or what. He moved to priority seating after this. 🤷🏼‍♂️ pic.twitter.com/WHZgh8pjzX

#Manspreading at its finest pic.twitter.com/XyC57KHAeT

The standing equivalent to manspreading. pic.twitter.com/02J6jx1txK

I AM SO TIRED AND THIS GUY'S MANSPREADING IS TESTING MY PATIENCE pic.twitter.com/C5zi3cIybP

Using all 280 characters is the digital equivalent of manspreading. Just stop it! pic.twitter.com/9JCumANv6V

Manspreading: It's a space issue.
Be considerate to others cause you're not the only taxpaying person on the public facility. pic.twitter.com/p13iZeFxxA

My dude on some next level manspreading pic.twitter.com/R35t21XcRj

Gotta love this Barcelona Metro campaign about the karmic perils of manspreading. pic.twitter.com/tiALu1Bple

Let's talk about this manspreading on the metro this AM, shall we? This man sat in that spot despite there being plenty other empty seats. pic.twitter.com/ZjHevMOTT8

Today on the tube #manspreading pic.twitter.com/FT8F4dXC6B

Extreme manspreading. (You can't see but it was a crowded train. No one wanted to sit by his head.) pic.twitter.com/fThw0CSsvZ

And then there’s these:

Apparently, the fightback has begun:

Today’s the day of the scratch with @InstinctTheatre . Catch us #manspreading all over the stage! pic.twitter.com/BFWZb4yGvW

Manspreaders of the world, take note.