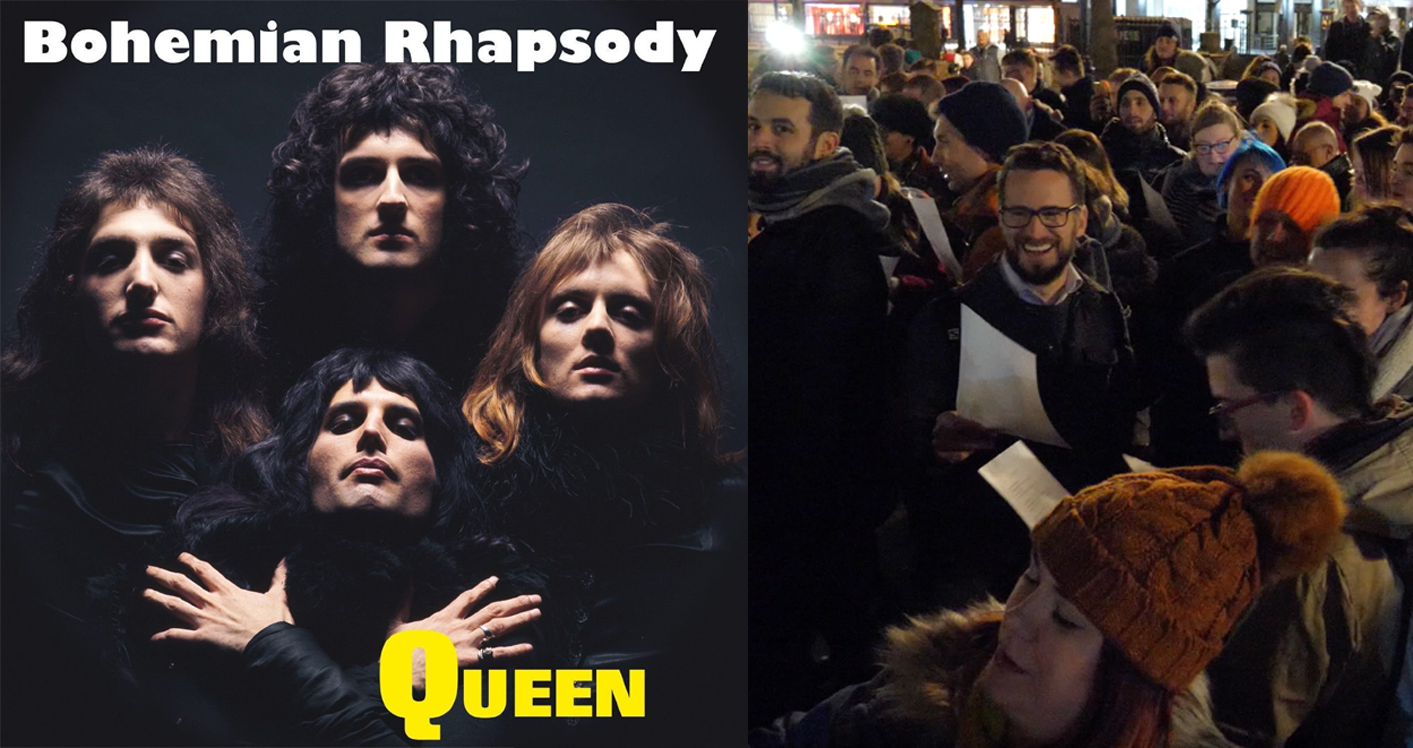 The organisers behind Birmingham’s recent mass singalong of Toto’s ‘Africa‘ have planned another musical flashmob in Cathedral Square, but this time they’re hoping hundreds will gather to belt out iconic Queen hit Bohemian Rhapsody.

The young lads behind the stunt are inviting everyone to join them at Cathedral Square – also known as Pigeon Park – outside St. Phillip’s Cathedral in the city centre to sing the chart classic.

Only last month, hundreds of Brummies gathered outside Birmingham Cathedral to sing Toto’s famous 80s classic ‘Africa’, in a bid to spread a bit of happiness.

Despite the freezing temperatures and to their surprise, people from all over the Midlands came trickling in with only minutes to spare before the start time.

Well over 150 people had congregated in Cathedral Square, where organisers were handing out printed lyric sheets for all who wanted to join in.

Event co-organiser Curtis Gott, who is Birmingham manager for the Propaganda club night at the O2 Academy in Horse Fair, said he came up with the idea when he was feeling down, taking inspiration from similar mass sing-alongs, including one in Newcastle and a viral event outside The White House in Washington, which raised money for The Water Project.

This time, Curtis returns with friends Samuel Catlow and Jon Mahon in the hope of spreading cheer and raising money for charity.

At the last singalong, the boys went around with a collection tin to raise funds for charitable causes in Africa.

“We were incredibly grateful for the generosity shown by attendees during the tin shake last time. The money has been donated to Forward UK.”

Forward UK is part of the Foundation for Women’s Health Research and Development which is committed to gender equality and safeguarding the rights of African girls and women.

For their next gathering, they have committed to collecting money for NAT, the National Aids Trust, “in honour of Freddy Mercury and to aid in the fight with HIV. Any donations would be greatly appreciated.”

The ‘Singing Queen – Bohemian Rhapsody in Pigeon Park‘ event is scheduled to take place on Monday 29th January between 7pm and 8pm.

Co-organiser Samuel Catlow said he was proud of what he and Curtis has achieved and the ability to bring people together for something good during difficult times:

Following the success of the ‘Africa’ singalong, a ‘Do the Macarena in Pigeon Park‘ event has also been set up on Facebook by Love Activists. They hope to raise money for homeless charities by mass performing the iconic 90s dance routine on Saturday 16th December at 5pm.