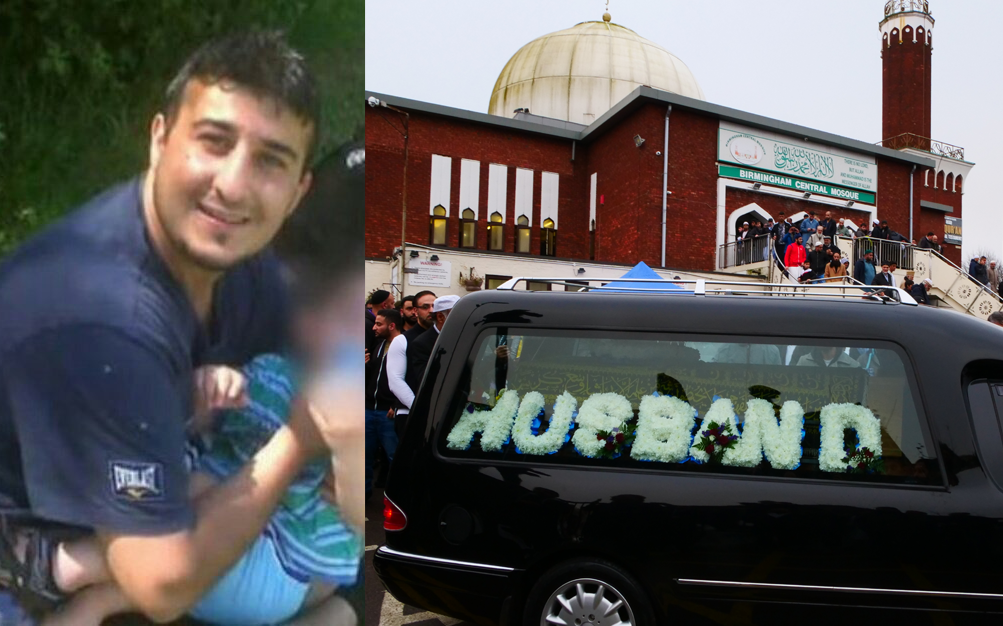 10,000 people attended Imtiaz Mohammed's funeral at Birmingham Central Mosque, according to officials at the place or worship (Adam Yosef)

Thousands of mourners came out to pay their respects to a victim of last Sunday’s Lee Bank Middleway crash this afternoon, as he was laid to rest following a moving funeral service at Birmingham Central Mosque.

Officials at the mosque have estimated that 10,000 people attended the Janazah service of 33-year-old taxi driver Imtiaz Mohammed, the father-of-six who died in a multi-vehicle collision not far from the place of worship on Belgrave Middleway.

Spilling over into two spacious prayer halls and a large community function hall, several stairways and two carparks, the funeral had an unprecedented turnout for the city’s main mosque, which struggled with the number of people attending.

Impromptu prayer spaces were created in both of the building’s car parks as makeshift mats and coats were laid down by worshippers on wet ground due to recent rainfall.

Despite the main central prayer hall in the mosque having a capacity of 3,500; staff at the Highgate venue witnessed individuals cramming into every possible space in all of the halls, rooms and stairways across the three main floors which are open to the public.

Worshipper Azhar Qayyum said: “Subhan’Allah, huge turnout, I was inside and the Janazah rows were tightly packed with each row virtually touching the row in front, yet so many prayed outside.

“May Allah accept him amongst the shuhadah (martyrs) and give sabr (patience) to his bereaved family.”

Mosque secretary Muhammad Ali, who has co-ordinated activities at the faith centre for over 15 years, was shocked by the turnout.

“In all the years I’ve been here, from funerals, Eid prayers and during Ramadan months, we’ve never had this many people show up for one service. We were shocked but it just shows how many people want to pay their respects to this man, May he be blessed in the hereafter.”

According to a statement on the mosque’s Facebook page: “Around 10,000 people attended Imtiaz’s funeral today, taking up space in our main prayer halls across three floors, and outside in our car parks and on the roads.”

The post added: “May Allah grant Imtiaz Mohammed peace, sabr and eternal reward on his onward journey, and may his family have strength and ease at this difficult time. Please pray for them all. Ameen.”

The funerals of many of the other victims of the fatal collision were also taking place at mosques across the city.

The funeral services of Touqeer Hussain, 26, and Kasar Jehangir, 23, were also listed to take place at the Ghamkol Sharif mosque today after Friday prayers.

Six people were killed and a seventh critically injured after a multiple-vehicle crash at the underpass on Lee Bank Middleway in Edgbaston, near Birmingham city centre, in the early house of Sunday 17 December.

Superintendent Sean Phillips of West Midlands Police said at the time that, “It is way too early to speculate on the causes of the accident,” which took place at around 1.10am.

Adding: “It will take some time to unpick the scene and just understand exactly what’s happened. It would be unfair for me to speculate at this time.”

He also announced that Belgrave Middleway would remain closed following a “harrowing and tragic” collision, until the following afternoon. Police reminded people not to share photos of the collision after graphic images began appearing on social media.

Although all of the deceased have been officially named, the investigation in the tragedy is ongoing.

Insp Steve Radford, from West Midlands Police, said: “We are still keen to hear from anyone who was in the area at the time and has not yet spoken to us.”

Who were the victims of the Birmingham crash?

There were six deaths as a result of the Lee Bank Middleway collision, which involved several vehicles.

Taxi driver Imtiaz Mohammed, 33, was the first to be named following the tragic incident.

The father-of-six from Golden Hillock Road in Small Heath had a son and five daughters, and was on his last fare of the night when the crash happened.

He had reportedly spoken to his wife to let her know he was on his way home just before the crash took place.

A GoFundMe appeal has been launched to support his family. The fundraising page, which states it has been set up by a relative, has so far raised £4,971 of its £10,000 target.

A message on the page explains: “This GoFundMe page will allow some support for the wife and children as this is just a little something to help them through this hard time financially. However, nothing will ever bring their beloved father back.”

Also caught up in the horrific crash were couple Lucy Davis, 43, and Lee Jenkins, 42.

The pair were passengers, returning home in Imtiaz Mohammed’s black cab following a dinner with friends.

Lucy and her boyfriend Lee died instantly when the cab collided with a high-powered Audi S3.

The confirmed passengers of the Audi S3 were Kasar Jehangir, Mohammed Fasha and Tauqeer Hussain.  Two of them died instantly, while a third died after emergency services attempted to save him.

The fourth Audi passenger was a 22-year-old man, who was seriously injured and remains critical.