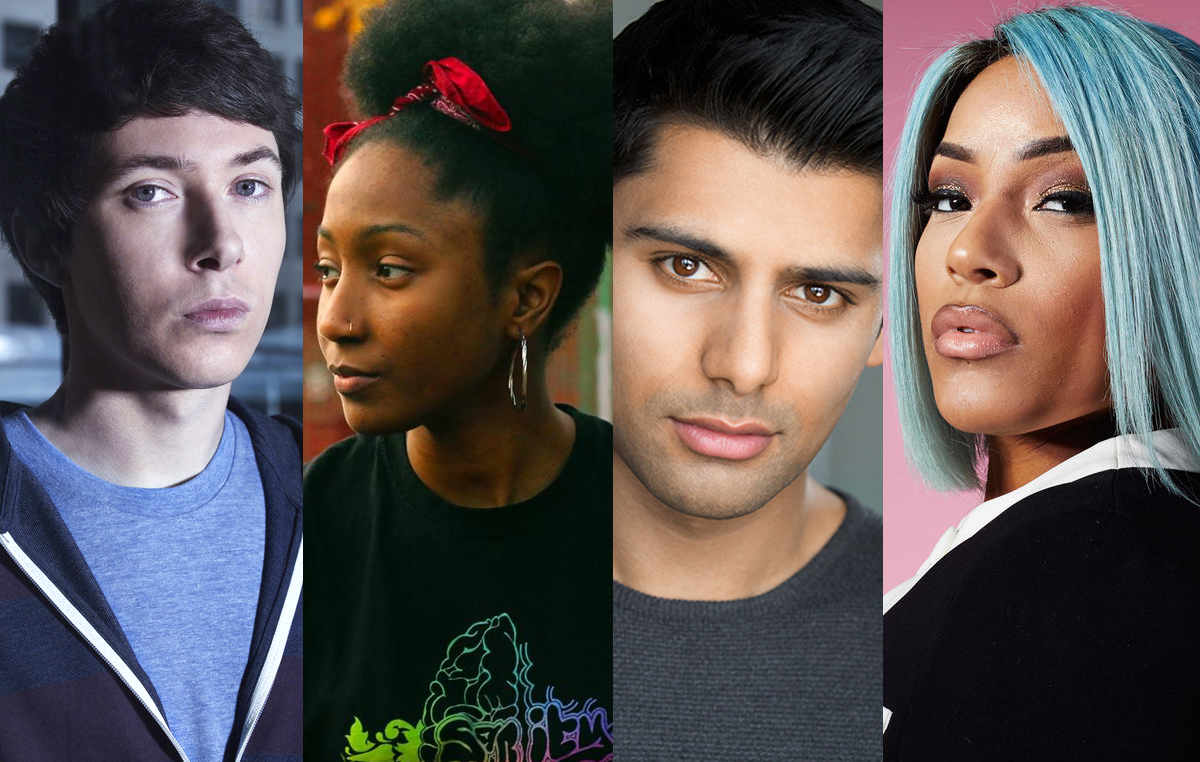 (L-R): Brummies Ryan Cartwright, Lady Sanity, Antonio Aakeel and Stefflan Don are just some of the Birmingham showbiz stars to look out for in 2018

As far as top entertainment talent hailing from Birmingham is concerned, the city is a gift that just keeps on giving.

Don’t believe us? You’d only have to check the IMDB resumes of Felicity Jones, David Harewood, Julie Walters and Scott Adkins; or the discographies of Ozzy Osborne, The Streets, UB40, Judas Priest and Steel Pulse to know we’re right.

So, who should you keep your eyes and ears peeled for this year? Here’s a run down of some of the key entertainers  and performance artists definitely worth watching:

A promising rising star originally from Wolverhampton – now based in Birmingham – Antonio Aakeel went from primarily moonlighting in advertisements, theatre and TV work just over a year ago; to spending much of 2017 being catapulted into the mainstream with a big screen debut in British crime thriller City of Tiny Lights alongside Riz Ahmed (Four Lions, Nightcrawler and Star Wars: Rogue One) and Doctor Who and Penny Dreadful star Billie Piper.

Not only has the young thespian filmed across continents over the last twelve months, but he’s even managed to squeeze in a comedy role in Guz Khan’s BBC Three show Man Like Mobeen. Antonio is clearly on a sure-fire showbiz path, and definitely worth keeping an eye on in 2018!

If you’re familiar with US sitcom Kevin Can Wait, you’ll recognise Ryan off the bat.

Ryan grew up in Erdington in Birmingham and attended Great Barr School, before he shot to fame playing narrator Darren in nostalgic comedy-drama television series The Grimleys, set on a council estate in Dudley, in which he starred alongside Noddy Holder and Amanda Holden.

He moved to Los Angeles ten years ago, and has had success in TV and film, landing roles in Mad Men, The Big Bang Theory, Vacation and Independence Day; Resurgence.

Back in 2010, Duane was nominated for the BAFTA Screen National Award for Best Emerging Talent, following appearances on Doctor Who, The Cut and The Bill.

Fast-forward to 2018, and not only has 32-year-old actor worked under the direction of Madonna, but he now lives in Los Angeles and has a starring role in top US crime drama NCIS. Not bad going for a Handsworth lad who used to be homeless.

Duane Henry was cast in NCIS as MI6 agent Clayton Reeves back in 2016, but it wasn’t long before his character Clayton Reeves would be featured as a regular on the show beginning in the 14th season. Duane clearly left an impression on the team behind the show.

Not only that, but Henry even managed to incorporate his Birmingham upbringing into his character’s backstory. Nicely done.

Noreen Khan, already hugely popular multi-award-winning radio presenter primarily known for her BBC Asian Network show, may need no introduction to her loyal listeners but she’s about to delve into the world of stand-up comedy.

Having started her radio career back in 2003, she was the first presenter to be poached from Club Asia radio by the BBC Asian Network, steadily moving the station’s Chart show to Weekend Breakfast and then onto presenting the Drive shows, where she has been achieving record listening figures since. As one of the BBC’s top radio presenters, Khan regularly interviews the biggest names from the world of film, music and entertainment.

She’s also no stranger to television and live events, having co-produced and presented her own chat show on cable channel Brit Asia TV and hosting everything from radio quiz shows, open air public festivals and intimate celebrity Q&As.

However, Noreen -who is a big hit on social media with over 107,000 Twitter followers, 42,000 Instagram fans and 37,000 Facebook ‘likes’ – is now making a jump for other creative markets including fashion and comedy. Having recently launched her own accessories brand NK Accessories, she has now formed and is hosting an all-female line-up of comedic talent for stand-up show Ladies of Laughter. Having received such a positive response following initial outings, the showcase is touring nationwide from next month.

Stefflon Don – real name Stephanie Allen – is a British rapper, singer and songwriter making a name for herself in the mainstream hip hop scene, securing the Best Female Act accolade at the MOBO awards in November.

Born in Birmingham but brought up in Holland and then London, the 26-year-old former hairdresser claims to be heavily influenced by her parent’s Jamaican culture, speaks fluent Dutch, does a bangin’ Brummie accent, and welcomes the musical comparisons with Nicki Minaj.

Having previously worked with top acts Jeremih and Krept and Konan, it was her Jax Jones and Demi Lovato collaboration Instruction in 2017 that helped raise Stefflon Don’s public profile; soon followed by her own track Hurtin’ Me, which peaked inside the UK top 10 and has nearly 39 million views on YouTube.

Stefflon has been nominated in the Critics’ Choice category for this year’s forthcoming Brit Awards, has her much-anticipated album on the way, and has a planned appearance on The Late Late Show with James Corden next week; so it’s safe to say we’ll all be seeing a lot more of Don in the very near future.

Music artist Lady Sanity is a promising star emerging out of the Birmingham rap scene.

Developing herself as a wordsmith in her teenage years, while simultaneously teaching herself to play guitar, the Brummie is beginning to make waves with her socially-aware lyrics.

Drawing inspiration from the likes of Lauryn Hill, MC Lyte and Missy Elliot, her genre-bending flow has caught the attention of BBC Music, PRSF’s Women Make Music Scheme and secured her GRM daily’s 2017 ‘Get Rated’ award.

In December, Lady Sanity was one of eleven UK emerging artists chosen to receive the first ever MOBO Help Musicians Fund, helping them take their careers to the next level.

With performance slots secured at Glastonbury, releasing regular new material and music videos, and dropping her EP For Figures last month, the sky’s the limit for Lady Sanity.

It’s seem like ages since his Best Newcomer nomination at the Edinburgh Comedy Awards back in 2012, but Brummie funnyman Joe Lycett has been humbly and passionately working the British stand-up circuit, from clubs to festivals to television, lighting up stages with his quirky comedy on topics including internet scams, sexuality, British accents, and this tale about parking tickets which has been viewed over 3 million times.

Not only has the 29-year-old has appeared on Live At The Apollo, 8 Out of 10 Cats Does Countdown, Celebrity Juice, Never Mind the Buzzcocks and The Jonathan Ross Show, but ensures he dedicates time to charity shows and social causes too. Last month, he opened the LGBT+ ‘Coming Out’ exhibition at the Birmingham Museum and Art Gallery.

If you recall his previous tour ‘If Joe Lycett Then You Should Have Put A Ring On It’, then you won’t be surprised that his In 2018 offering is titled ‘I’m About to Lose Control and I Think Joe Lycett‘, billed as his biggest tour yet, with 93 dates scheduled so far. Expect plenty more anecdotes about his online pranks, complaint letters and his take on the social issues of the day; as Joe continues embarking on his fun-filled rise throughout 2018.

Ash Kimon and Lucas Henry are two mates who first met each other when they were 15, at a Birmingham youth club, and have since been making a name for themselves as one of the most exciting duos in the recent British music scene.

They were so impressed with each others skills, they began writing and performing together in the club’s studio, eventually forming Lotto Boyzz.

Grafting their way up and out of their teenage years, they released their first music in 2016 and have since become to the talk of the town, with many noting their genre-blurring in their single ‘No Don‘ – watched over 7,000,000 times on YouTube – as a sign of their creative potential to come.

Now 21, the lads have released popular tracks including FaceTime Me, Bad Gyal and Birmingham (Anthem), the latter of which is accompanied with a music video featuring the boys singing and dancing in front of iconic Birmingham landmarks.

With major new releases, collaborations and a tour on the cards later this year, Ash and Lucas are leaving quite an impression with industry insiders, and will no doubt be quite a hard act to follow.

Harry Kirton was just 15 and studying for his GCSEs when he bagged the role of Finn Shelby in Peaky Blinders, following an open audition that attracted hundreds in Birmingham back in 2014, and has remained a part of the show through series 2, 3 and 4.

Now 19, his character has greatly developed over the course of three incredibly nail-biting seasons of the show (no spoilers here, we’re afraid!), while he’s had the opportunity to hone his acting skills after three years on set with the likes of Cillian Murphy, Helen McCrory, Sam Neill and Tom Hardy. He now truly is a stand-out actor in his own right.

While it currently appears Harry will be returning in series 5 of the gripping BBC drama next year, the Northfield native is presently branching into other roles. His first film role, in fact.

Playing Tyler in Claire Downes’ debut feature film We Can Be Heroes, Harry gets to flex his chops in a milder family-friendly action role alongside a stellar principle cast in the movie adaptation of Catherine Bruton’s much-loved children’s book.

Harry Kirton is definitely worth keeping an eye on this year, as he has a promising future ahead of him.

Known to most simply as ‘Stelly’, city schoolteacher Andrew Stylianou was last year crowned Mr Birmingham 2017/2018, and was also a contestant in the Mr England competition.

At 6ft 4ins, the 24-year-old Head of Year at Tile Cross’ International School is also a fashion model, having strutted his stuff on several catwalk shows and last year launching his own fashion and talent event called Endeavour, which raised money for charity.

Having been praised for his looks by the likes of former supermodel Tyra Banks, Stelly uses his role as a model, host and presenter to raise awareness for multiple social and charitable causes, spending some of last year fundraising by sleeping rough; and handing out blankets to the homeless and vulnerable.

With plans to host a second Endeavour event this year, ooze style and glamour as Mr Birmingham, and potentially develop his own YouTube channel, this will be a special year for Andrew Stelly and we’re confident he’ll be transitioning into greater opportunities over the next 12 months!

That’s our top ten showbiz Brummies to look out for over the next year, but if you think you know of someone in the city who’s breaking new boundaries or making a difference, drop us an email at [email protected].