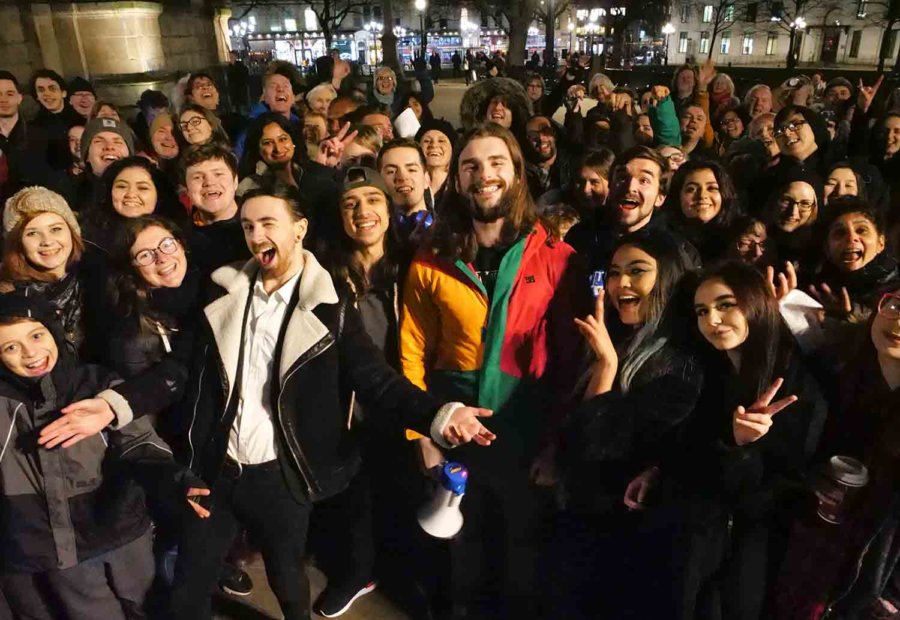 Around hundred Brummies gathered in Birmingham city centre this evening to belt out iconic Queen hit Bohemian Rhapsody in a mass singaglong to spread some New Year cheer.

Congregating at Cathedral Square – also known as Pigeon Park – fans of the rock song met up to sing the chart classic following a callout on Facebook.

Armed with their phones and song sheets, excited attendees came together in the city centre for only a few minutes, to share their love of the popular 1975 track, before dispersing full of smiles.

Despite temperatures of 6°C, people from all over the region descended on the green around Birmingham Cathedral, where organisers were handing out printed lyric sheets for all wanting to join in.

Promptly at 7pm, passers-by were treated to a unique rendition of Bohemian Rhapsody, a song originally written and performed by Freddie Mercury.

Although only participating for just under ten minutes, excitement was in the air as many took part in the social stunt.

Last November, hundreds of Brummies similarly gathered outside the cathedral to sing Toto’s famous 80s classic ‘Africa’, in a bid to spread a bit of happiness.

Event co-organiser Curtis Gott, who is Birmingham manager for the Propaganda club night at the O2 Academy, said he initially came up with the idea when he was feeling down, taking inspiration from similar mass sing-alongs, including one in Newcastle and a viral event outside The White House in Washington, which raised money for The Water Project.

This time, Curtis returned with friends Samuel Catlow and Jon Mahon in the hope of spreading cheer and raising money for charity.

“The first singalong we did, Toto by Africa, did so well we thought we’d try it again. This time it was raise money and awareness for HIV and AIDS. We’re probably going to do a next one, as it’s brought people together more than once, with some travelling down from Sheffield, just for this occasion. It’s mainly about bringing people together and developing something bigger.”

At tonight’s singalong, the boys went around with a collection tin to raise funds for NAT, the National Aids Trust, “in honour of Freddy Mercury and to aid in the fight with HIV”.

Co-organiser Jon Mahon said he was proud of what the friends had achieved:

“It’s just another beautiful example of what can happen when people come together for one awesome unified cause.”

What is Bohemian Rhapsody?

The Birmingham ‘Bohemian Rhapsody’ singalong was held following the success of the ‘Africa’ singalong in November, while a separate ‘Do the Macarena in Pigeon Park‘ event was then held in December. Both events raised money for charity.