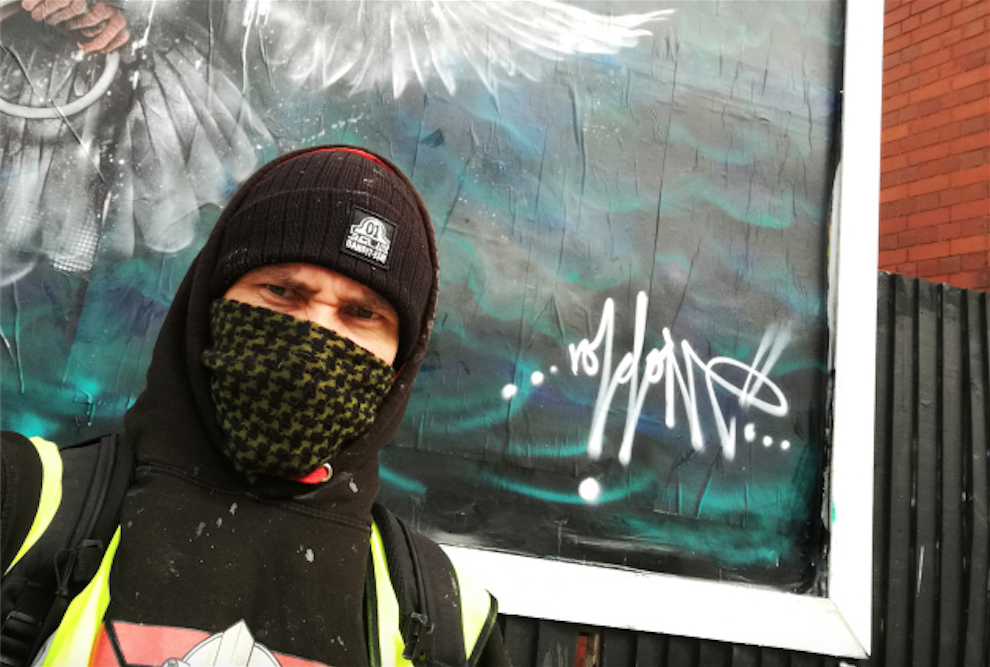 Billboards are used to sell everything from washing powder to swimsuits, from cigarettes to whiskey, from films to games, all that and more, much more. Peace, on the other hand, is very rarely seen on a billboard.

A new billboard has appeared in Birmingham that is a bit different, it dares to make you think less about a product or service, and more about a concept that is much needed in our world. War is eroding peace, and the media machine remains largely mute as more money is spent on weapons of mass destruction and less on the social and health needs of the people.

Birmingham based artist Void One has produced a large scale work that highlights a topical anti-war theme with undercurrents to the recent events in Syria.

The billboard is very striking, very bold, and the message is very potent. The plea for peace and understanding in a world slowly edging towards a deeper conflict forms the beating heart of this art.

Void One has a deep passion for a shared humanity and in his work and outlook he tries to use art as a platform to engage people in a discussion.

He kindly agreed to be interviewed and answered questions relating to his new work, and he also shared his views about the current situation, both here in the UK and in the Middle East, and how events are spiralling out of control and setting dangerous new political precedents:

What prompted you to produce this work?

There are a number of factors that have brought me to this point, but ultimately it boils down to a complete breakdown in trust with our government. Or moreover, the realisation that clichés about bringing liberal democracy to the world and the abject failure of our foreign policy over the decades, are actually just a pretext for us to sell weapons to despotic regimes, to steal resources, to destabilise countries that don’t share our ideals, and to posture on the world stage as though there were any semblance of the British Empire left.

We find ourselves caught in what appears to be a proxy war with Russia, railing against the use of chemical weapons with no clear evidence, compounded by the fact that we sold Assad the precursor chemicals he’s alleged to have used to produce sarin back in 2012.

The OPCW completed a survey of the site we bombed in 2017 and declared it safe. Do we know something they don’t? Why wasn’t that shared and left to an independent body that was awarded the Nobel Peace Prize for their work in eradicating chemical weapons? Footage of the aftermath of our strikes clearly show there were no chemicals on site, else where are the hazmat suits? The breathing apparatus? I want any military action to follow clear evidence, not hyperbole and hearsay, else it sets a very dangerous precedent for the future.

Have we learned nothing from Iraq? There’s been a complete disregard for international law and the convention that military action should follow a debate in Parliament. Why were these air strikes conveniently pushed through whilst MPs were on a break? Because ‘outsourcing’ decisions to a democratically elected body is no longer good enough, or worse, considered a hindrance? You can’t lambaste a sovereign country as despotic whilst in every way acting like a tyrant yourself.

That Britain ought to stand against international war crimes is justified, but only when applied universally. Why is it acceptable to attack Syria under some pretense of moral duty, when in the same week journalists and civilians are being shot by snipers in the West Bank with not a word of condemnation from our government? When we sell billions in arms to Saudi Arabia whilst it’s widely known those weapons have been used for atrocities in Yemen? This government has blood on its hands and must be held accountable. I seriously doubt their ability to rise to the gravity of the situation we find ourselves in right now.

Theresa May has no parliamentary majority, and is now sabre rattling in an attempt to cover up her shambolic record on everything from health, crime, social care, welfare, Grenfell, Windrush, the list is endless. May’s dismissal of criticism as a desperate humanitarian effort flies in the face of fantasy. You have to build peace, and you can’t do that with explosives because you want to be seen to do something. When our foreign secretary admits that “air strikes will not turn the tide of the conflict”, what’s the point? It’s funny we always have money for war, 6 million for 8 missiles, but nurses have to use food banks and disabled people are killing themselves under the weight of being erroneously deemed fit to work.

There’s something deeply disturbing going on in this country and it frustrates me to the point I feel I need to do something. My work “Death from a Dove” satirises the oxymoron fighting for peace. It portrays a world where the concept of peace has been rendered a hollow platitude served up to justify war. The last green leaf has fallen from the laurels, withered in the mouth of a suicide dove pulling the pin on a grenade. It’s presented in prime sight as a crime site, because that’s how I feel about what’s happening. It all seems so brazen! For me, it captures the hypocrisy and sense of hopelessness that pervades the current political climate. It’s part of a series of protest pieces I’ve undertaken over the past couple of years under the name ‘Operation Peace Take’.

Can art make a social or political impact?

I think it always has, these kinds of subversive works have the capacity to capture sentiments and convey information in a way that words can’t, there’s a purity to it. There’s something powerful in symbolism and iconography that we can all identify with immediately, and I love to play around with that.

I have to say that I didn’t set out to produce political work and it’s not something I do regularly. I often find it contrived or poorly executed, but I felt compelled to manifest some of my frustration, if anything, so I wouldn’t go insane thinking about it all. I try to avoid the news, because it’s frankly both depressing and infuriating.

Your new work is on an epic scale. How hard was it to produce?

Well, this isn’t my first rodeo. I did a billboard after the referendum result in 2016 entitled “Backward – Birmingham Civic Irony”, an irreverent caricature of the “Forward” civic heraldry seen across the city. I learnt a few tricks during that process and it was a much smoother operation this time around. I’m in a bigger studio now, so that affords me the space I need to work at much larger scales.

It was no different from any other painting, just that I had to keep moving bits of paper around my walls. At this point I have to say a massive thank you to Inch for footing the ladders and not complaining about being completely drenched in wheat paste!

Birmingham city is a place rich in art and culture, and some of that art is not always housed in museums. This city is peopled by minds who aspire towards truth and hope, and a shared humanity. Void One has produced a daring work that allows the viewers to ponder on questions about humanity and the possibility of making positive change.

Find out more about Void One and his work at www.voidone.uk.

(Visited 2,009 times, 1 visits today)
https://www.iambirmingham.co.uk/2018/04/18/birmingham-guerrilla-artist-hijacks-city-billboard-syria-protest-message/https://www.iambirmingham.co.uk/wp-content/uploads/2018/04/Void-One-Guerilla-Street-Artist-Birmingham-800x539.pnghttps://www.iambirmingham.co.uk/wp-content/uploads/2018/04/Void-One-Guerilla-Street-Artist-Birmingham-300x202.png2018-04-22T15:35:54+00:00Rangzeb HussainActionArtsBrumFeedCommunityInterviewsNewsPoliticsStreet LifeWorldactivism,Activist,anti war,Artist,artivism,B'ham,billboard,Birmingham,Brum,Brummie,City Centre,Death From A Dove,Death From A Dove Fighting For Peace,Fighting for Peace,Graffiti,Graffiti art,Graffiti artist,guerrilla artist,Identity,Interview,mural suvertising,One,Politics,Protest,Rangzeb Hussain,Secret,Street Art,Street artist,subversive,Syria,vandal,vandalism,Void,Void On,Void One artist,wall art,warBillboards are used to sell everything from washing powder to swimsuits, from cigarettes to whiskey, from films to games, all that and more, much more. Peace, on the other hand, is very rarely seen on a billboard. A new billboard has appeared in Birmingham that is a bit different, it...Rangzeb HussainRangzeb Hussain[email protected]AuthorI Am Birmingham
« 12 photos of the ghost streets of 1960s Birmingham
Former Guantanamo prisoner Moazzam Begg declines request to appear on Big Brother in the most fitting way possible »