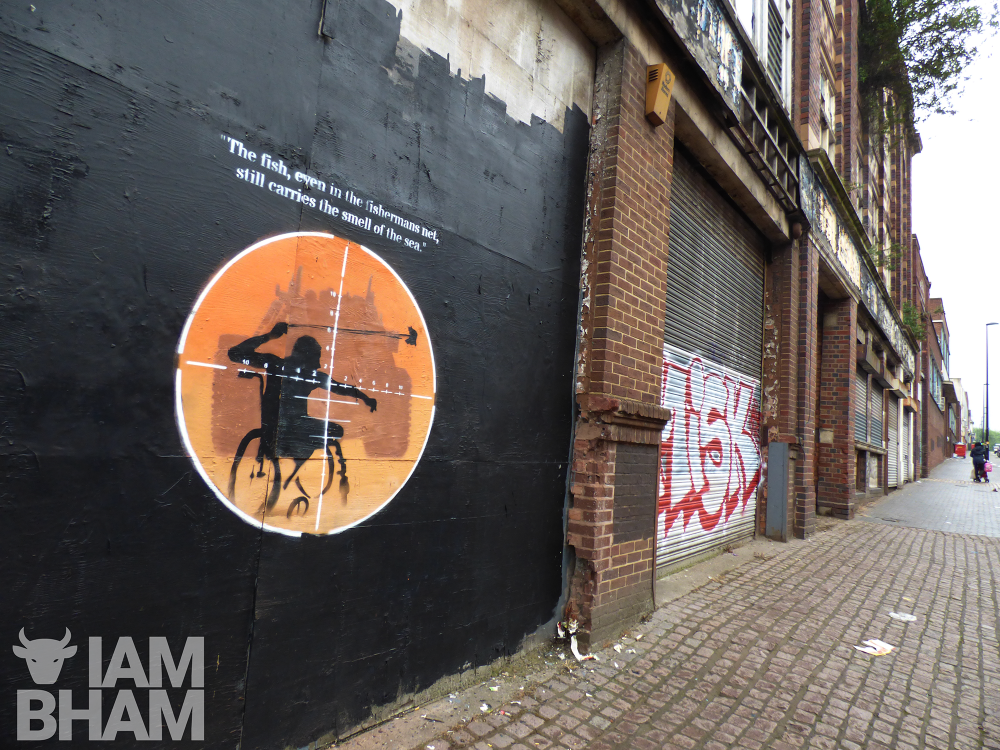 Last night, a new work went up on Bradford Street in the city centre, on the side of a building that has been in a derelict condition for over a decade.

The new public artwork, believed to be by local artist Mohammed ‘Aerosol Arabic’ Ali, is inspired by tragic events on the border of Gaza where Palestinian protestors were shot by Israeli soldiers.

The stencil art portrays a Palestinian man, who lost his legs to Israeli bullets in a previous demonstration; protesting near the Gaza border, against the opening of the United States Embassy in Jerusalem.

The street art uses elements of the ‘David and Goliath’ story and shows a disabled man using his sling against a tank while sitting in his wheelchair.

This new work is inspired by an iconic photograph that was taken by Mahmud Hams during the Gaza protest on Monday 14 May when Palestinians held an anti-occupation rally against Trump’s decision to move the American embassy from Tel Aviv to Jerusalem.

The art evokes the powerful moment of a man standing up to odds greater than he can ever hope to defeat, yet the spirit of freedom remains indomitable and powerful. The artistic mural evokes this theme by illustrating the disabled man’s silhouette, shown defiant against an approaching tank in the distance, while his wheelchair-bound body is framed by a sniper’s crosshairs.

Above this dynamic image is a quote by Palestinian writer and poet, Mourid Barghouti, which reads: “The fish, even in the fisherman’s net, still carries the smell of the sea.”

Birmingham is fast becoming a hub for street art fused with themes pulled from recent world events. Artist Mohammed Ali has in the past used public spaces as a platform for politically vocal artwork.

Ali – who has been appointed a Trustee of Birmingham Museum & Art Gallery – has touched on the plight of the Palestinian people a number of times, explored world poverty and created murals and stencil art in tribute to the political activism of Nelson Mandela and boxer Muhammed Ali.

Last month, Birmingham based artist Void One produced a large scale work highlighting a topical anti-war theme following events in Syria. The graffiti art was created over a commercial billboard in Digbeth and entitled ‘Fighting for Peace’.

(Visited 2,632 times, 1 visits today)
https://www.iambirmingham.co.uk/2018/05/31/palestinian-sniper-victim-artwork-appears-overnight-digbeth-birmingham/https://www.iambirmingham.co.uk/wp-content/uploads/2018/05/P1770996-800x600.pnghttps://www.iambirmingham.co.uk/wp-content/uploads/2018/05/P1770996-300x225.png2018-05-31T21:23:33+00:00Rangzeb HussainArtsCommunityNewsPoliticsRacismWorldAerosol Ali,Aerosol Arabic,Art,artwork,B'ham,Birmingham,Brum,conflict,Digbeth,England,Fadi Abu Salah,Gallery,Gaza,Graffiti,Images,injustice,Israel,Israeli,Jerusalem,Middle East,Mohammed Ali,Mural,Palestine,Palestinian,Photographs,Photos,Political,Politics,Rangzeb Hussain,spray art,spray paint,stencil,stencil art,Street Art,UK,US Embassy,wallStreet art has appeared in Birmingham's Digbeth area depicting events from the current Israeli-Palestinian conflict. Last night, a new work went up on Bradford Street in the city centre, on the side of a building that has been in a derelict condition for over a decade. The new public artwork, believed...Rangzeb HussainRangzeb Hussain[email protected]AuthorI Am Birmingham
« Bollywood conference explores representations of gender, sexuality, religion, caste and age
How a fake news story about Birmingham Muslims has gone viral for all the wrong reasons »