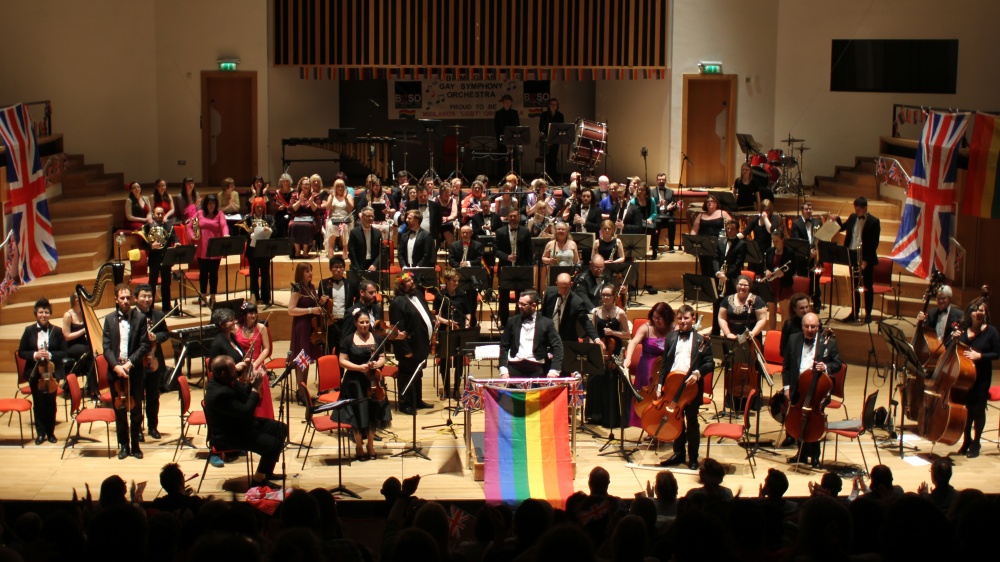 The Birmingham Gay Symphony Orchestra performed at their 10th anniversary concert to raise money for the Naz and Matt Foundation (Photo: Tom White)

Birmingham Gay Symphony Orchestra (BGSO) and an audience of over 150 threw their support behind the LGBT charity, Naz and Matt Foundation last week, as the audience emptied their pockets in aid of the charity.

The Foundation has a mission “to never let religion, any religion, come in the way of the unconditional love between parents and their children”, a message backed by the BGSO.

The final sum came to £352.66, an amount that will contribute towards funds to help the Foundation end prejudice in religious and cultural communities against LGBT+ people.

Birmingham Gay Symphony Orchestra is the LGBT+ community orchestra for Birmingham. Most members identity as LGBT+ but they welcome allies as members of the ‘BGSO Family’ too.

“Building links across communities is what we do”, explains BGSO violinist, Chair and Leader of the Orchestra Kat Galbraith.

“It was an honour to share the stage with Matt and a privilege to support The Naz and Matt Foundation at our 10th anniversary concert. They bring people together and that’s our mission too. We have Lesbian, Gay, Trans, Pan and other members as well as several straight allies and people from all backgrounds in our audience.”

Matthew Mahmood-Ogston from the Naz and Matt Foundation said: “It was an honour to travel back to the city where I met my darling Naz and speak to such a generous audience at the BGSO’s 10th Anniversary Concert. These donations will support our important work and our mission of helping every person be who they were born to be.”

Naz and Matt Foundation was set up in 2014 following the sad loss of Matt’s fiancé, Nazim Mahmood, who took his own life two days after his deeply religious family confronted him about his sexuality.

According to the foundation, it “exists to empower and support LGBTQI (Lesbian, Gay, Bisexual, Transgender, Queer, and Intersex) individuals, their friends and family to work towards resolving challenges linked to sexuality or gender identity, particularly where religion is heavily influencing the situation.

“By tackling the problem head on and raising awareness Naz and Matt Foundation hopes to open the eyes of closed minds in communities and families so that they will love the children they gave birth to, for the individuals they were born to be.”

“I am so proud of the BGSO Family”, added BGSO Musical Director Jack Lovell.

“As I stood on stage on Saturday and I heard Matt’s moving words I knew the audience would be generous, but the donations surprised even me. Performing Elgar’s stunning Nimrod afterwards only cemented the moment. We stand for acceptance, and we are proud to have such a generous audience.”

The Birmingham Gay Symphony Orchestra is the Midland’s LGBT orchestra. BGSO promotes musical talent directly from within the LGBT community, illuminating the diversity that exists within it to the wider community and beyond.

As an LGBT orchestra, they provide a safe ‘non-scene’ environment centred around a shared interest where people can come together to express who they are without any additional pressure or expectations.