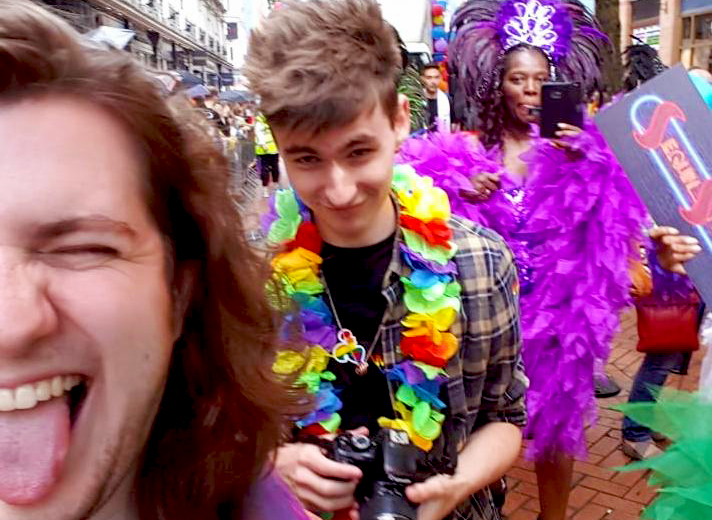 The idea of attending Birmingham Pride 2018 was an incredibly daunting one.

Although I’m gay, I have never particularly gone out of my way to broadcast it to the world. It isn’t something I’m necessarily ashamed of admitting, but it’s not a part of my identity that I go out of my way to show.

So in all honesty, the very thought of publicly displaying this resounding sense of “pride” in my sexuality wasn’t something I found a natural fit.

However, after much convincing from a close friend this year (and the promise of some free food, alcohol and even the opportunity to pet some dogs) I decided to tag along, take some pictures and see just what Pride had to offer.

Let’s start with the parade, and, my God, what a spectacle it was – a sheer explosion of sound and colour that managed to live up to the months of hype people had built up around it.

Actually being allowed to walk alongside them, I could practically feel every drop of energy pouring from the dancers and entertainers. They never dropped a beat – each individual giving it 100 percent of their energy – and you could see the crowds really responding with the same level of enthusiasm. There was a real sense of joy to the event that even managed to get this killjoy here dancing along the streets.

Every single float had its own distinct style and flavour, each one beautifully adorned with all sorts of decorations. Some floats belonged to public services such as ambulance, police and fire services; some were representing the many bars and clubs strewn throughout Birmingham’s Hurst Street, and others were a showcase of the different sexual identities and achievements of the LGBTQ+ community.

It was especially nice seeing the many charitable ventures and voluntary groups marching through the crowd, and it’s a chance to shine a light on the hard work that they do.

For me though, the most important part of pride was seeing the crowds respond to the events. Seeing families and children dressing up and cheering along was a real moment of clarity.

Never before in my life have I seen such acceptance, especially with the wealth of different sexual identities on display. It was extremely different to what I’m accustomed to, something very new and unique. You could see the people on the floats feeding off of this elation; there was a strong sense of catharsis after months of work and dedication.

For some of these floats though, this isn’t just a chance to let loose and have fun. It’s an opportunity to show an entirely new side of their individuality, a part of them that society wouldn’t usually acknowledge, let alone accept as part of a celebration.

That’s exactly why a day like Pride is needed though. It allows parts of the community that are usually shunned to let their voices be heard. It allows them to say their piece and show the world a part of their identity that they would usually have to confine.

At first it was a strange sight to wrap my head around, but after having had a few days to reminisce I can start to see the beauty in it all.

After the parade was over, the mood changed for me and this is where some of the cracks of the event started to show.

Going through the barriers past the parade, and into the clubbing area, I noticed a significant shift in tone. Things became much more hectic and clustered, and a lot of that positive energy had devolved into a typical night of drinking (this just involved a lot more colourful attire than the clubs I’m used to).

I understand why this part of the event is necessary, but everything became far more expensive and commercialised, and, if I’m honest, some of that initial magic was lost.

It was great being able to see some of the acts and catch up with many of my friends who were there, but I found much more solace up in the press area. I had a bird’s eye view of the party atmosphere, and I could clearly see everybody was having a great time letting loose and getting drunk.

All in all, my Pride experience was an extremely positive one. I’m so glad that I was convinced to go because it really did manage to change my perception of the event.

There was such strength and solidarity on display throughout the parade. Knowing that children will be growing with a much higher level of awareness and tolerance was a real sight to behold, especially knowing that even people from my generation still struggle to accept the LGBTQ+ community.

It proves why events such as this are needed, because it shows that society is more willing to accept the plethora of sexualities and identities that we see today. Although my experience in the clubbing area wasn’t as positive, I do fully understand that this wasn’t aimed at me as much as it was for others. I was happy to leave my experience where I did, and I left with a lot of great memories.

I never thought I’d say this, but I’m actually excited to go next year and explore the event even further.