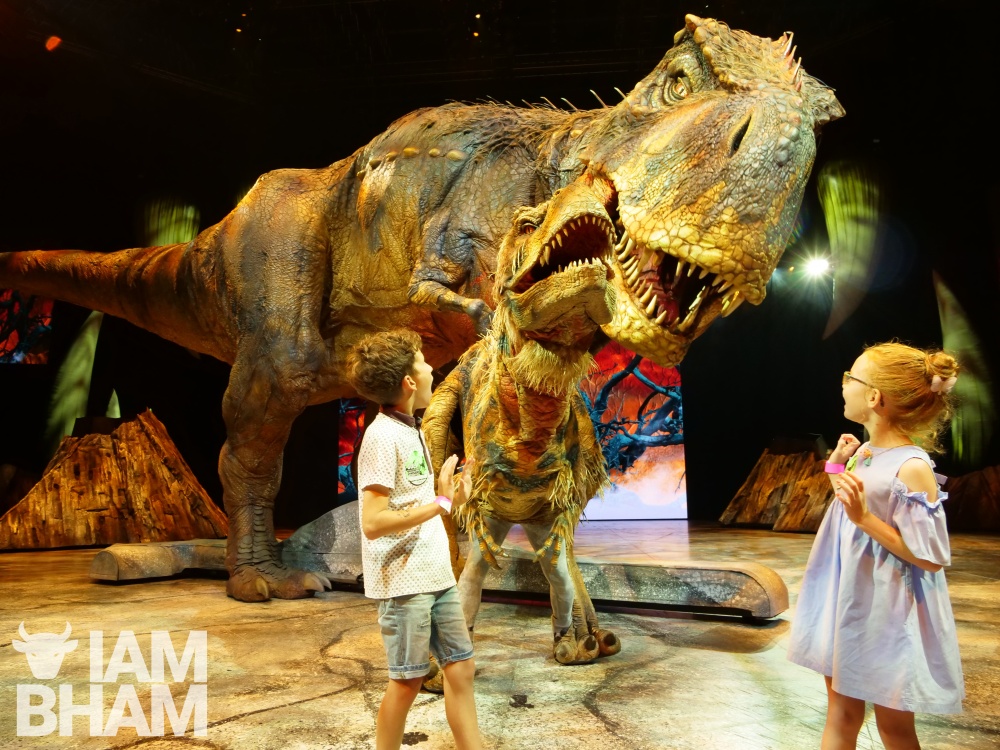 Dino-mania appears to be back in Birmingham this summer, and not just because of the latest installment in the Jurassic World film franchise or because Dippy the Dinosaur is on tour in the city!

From today, some of the most well-known, interesting and predatory dinosaurs will be once again roaming the earth – specifically Birmingham -as the BBC brings its award-winning television show Walking with Dinosaurs to life in a £15 million live extravaganza.

Walking with Dinosaurs – The Arena Spectacular kicks off at Arena Birmingham this evening, and will be shocking and amazing audiences for three days until Saturday.

Based on the popular television series, the show will be helmed by Countryfile presenter Michaela Strachan, who is playing a paleontologist called ‘Huxley’. Strachan’s previous work with animals includes presenting Springwatch and The Really Wild Show.

Seen by over 9 million people in more than 250 cities around the world, audience will be captivated, amazed and thrilled as the greatest creatures ever to walk the earth return before their eyes.

Unlike the digital CGI dinosaurs often seen in the TV version of Walking with Dinosaurs, the live version recreates the extinct animals using animatronics and actors, ensuring a more immersive experience with real live moving replicas of the prehistoric beasts right in front of the audience.

The £15m updated production features new, state of the art technology, showcasing detailed and colourful changes to the dinosaurs based on the latest scientific research, with some species having feathers for the first time.

The dazzling production features the biggest and best dinosaur show in the world. Internationally renowned designers have worked with scientists to create 18 life-size creatures, including the Stegosaurus, Raptors, and the terrifying Tyrannosaurus-rex!

The nearly two-hour show explores and charts the evolution of dinosaurs and depicts scenes of tense interactions between dinosaurs. Marvel at the story of their 200-million-year reign on earth, as the continents split and the show transitions from the Triassic to Jurassic eras. Watch them walk, hear them roar, and see their fight for survival and supremacy depicted in almost cinematic realism.

Walking with Dinosaurs  – The Arena Spectacular is on at Arena Birmingham between Thursday 26th – 29th July 2018. For tickets, click here.

Family tickets available on 7pm performances, subject to availability. Please note Michaela Strachan will appear at all performances with the exception of 11am shows.

(Visited 449 times, 1 visits today)
https://www.iambirmingham.co.uk/2018/07/26/awe-inspiring-walking-dinosaurs-spectacular-rocks-birmingham/https://www.iambirmingham.co.uk/wp-content/uploads/2018/07/P1633673-800x600.jpghttps://www.iambirmingham.co.uk/wp-content/uploads/2018/07/P1633673-300x225.jpg2018-07-28T14:44:58+00:00Staff ReporterAnimalsBrumFeedEducationEntertainmentEventsHistory & HeritageNewsShowbizWhat's OnArena Birmingham,B'ham,BBC,BBC Studios,Brum,Dino,Dinosaur,Dinosaurs,Dippy On Tour,Dippy the Dinosaur,Entertainment,events,Global Creatures,I Am Bham,I Am Birmingham,July 2018,Jurassic World,Michaela Strachan,Raptors,Show,Stegosaurus,Tyrannosaurus Rex,Walking with Dinosaurs,What's onDino-mania appears to be back in Birmingham this summer, and not just because of the latest installment in the Jurassic World film franchise or because Dippy the Dinosaur is on tour in the city! From today, some of the most well-known, interesting and predatory dinosaurs will be once again roaming the...Staff ReporterStaff Reporter[email protected]AdministratorI Am Birmingham
« The Flyover Show returns next month with the best of Black British talent
Who are the Drag Punk Collective? »