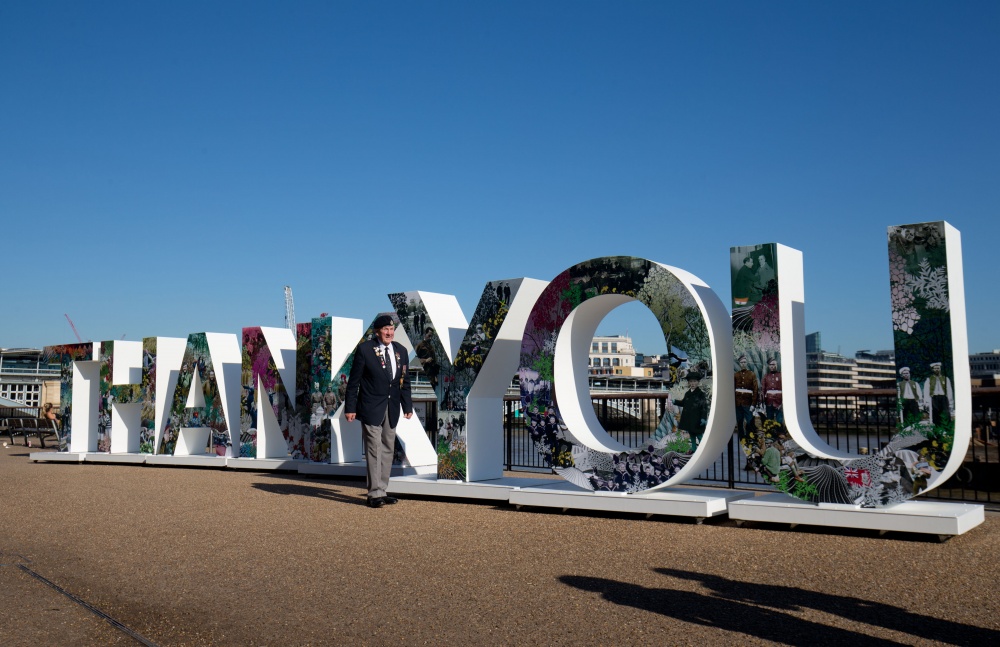 A giant eight-foot “THANK YOU” message will be appearing in Birmingham’s Victoria Square tomorrow, in the form of an interactive 3D art installation.

The Royal British Legion is bringing the structure to the city for one-day only, encouraging the public to leave messages of thanks to the First World War generation who shaped our society.

This year marks 100 years since the end of the First World War. To mark the centenary, The Royal British Legion has launched a movement to encourage the public to say ‘Thank You’ to the First World War generation who served, sacrificed and changed our world.

To kick off the movement, the Legion has created a spectacular ‘Thank You’ installation – 8ft high by 52ft long – which was unveiled on London’s South Bank by the Tate Modern on Friday 3rd August, exactly 100 days from November 11th.

The installation will be in place at Victoria Square in Birmingham on Wednesday 15th August, but only for one day, as part of a UK-wide tour.

The letters showcase a unique design by acclaimed artist, Sarah Arnett, which brings the war’s legacies to life. From Munitionettes to Sikh and Muslim infantrymen, schoolgirls working the fields and renowned war artist Paul Nash, a collage of images honours the diverse contribution of the First World War generation.

On the back of the letters the public are invited to leave their own thoughts and messages of thanks to those who contributed a century ago.

The ‘Thank You’ movement will honour not only the 1.2 million British and Commonwealth Armed Forces who lost their lives, but also those who played their part on the home front, and those who returned to build a better life for the benefit of generations to come.

All communities are being encouraged to join the movement by expressing their thanks this year, with a number of high profile organisations already supporting the movement. Partners include Birmingham’s very own Cadbury, the English National Ballet, Diwali in the Square, Highclere Castle, the RFU and many others. The movement will also be represented at several major Pride parades this summer.

Jane Britton, Area Manager West Midlands, at The Royal British Legion, said: “We all have a connection to the First World War and we all have a reason to say ‘Thank You’ to this special generation.

“Whether your personal Thank You is an event dedicated to those who made a difference in your community, a visit to a place of significance, or a simple Tweet, there’s no limit to the ways people can take part. We are making a plea to every single person across the UK to get involved and take a moment in this very significant year to say ‘Thank You’.”

Sarah Arnett said: “It’s been an honour to work on such a meaningful project during the centenary year. Having recently researched my own family history during the war, I’m amazed by how much of the world around me is still so connected to that time.

“It’s been deeply moving to think about what each member of that generation went through as I worked with their photos during the design. It’s absolutely fitting that we should say ‘Thank You’ and remember their legacies.”

As part of a UK-wide tour, the installation will not only visit Birmingham but also Liverpool, Plymouth, Swansea, Belfast and Dundee later in the summer. The back and sides of each 3D letter is a blank canvas where the public will be invited to write their own personal messages of thanks directly onto the installation.

For further information and to find out how you can get involved in the ‘Thank You’ movement, please visit rbl.org.uk/thankyou. Join in the conversation using #ThankYou100.