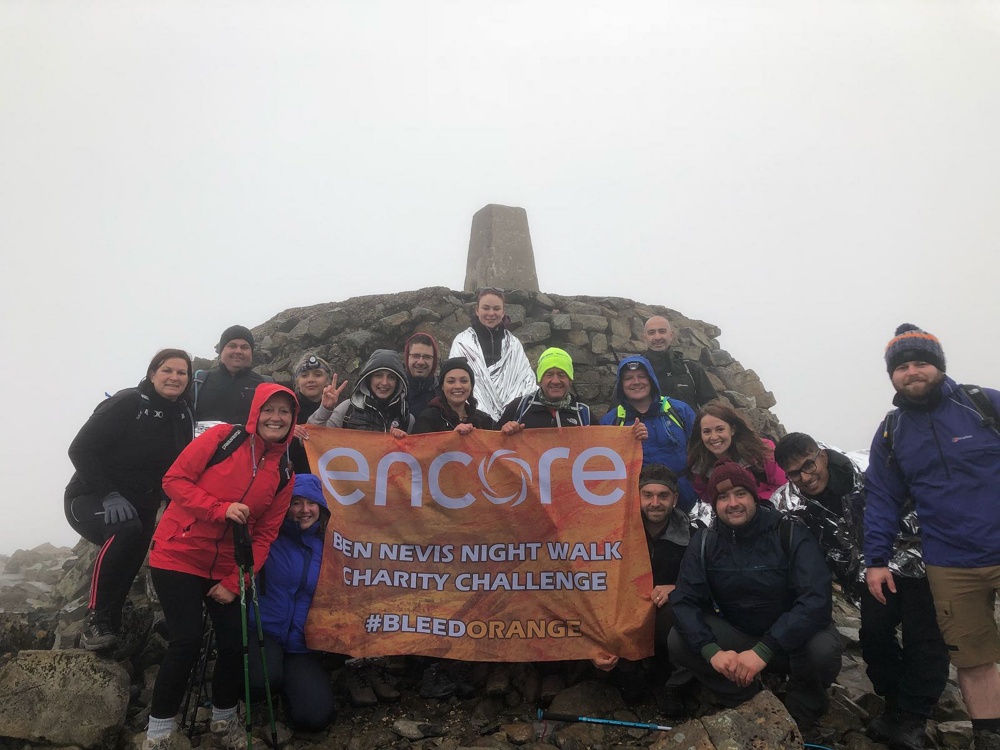 Staff at a city recruitment agency raised £9,000 for charity by climbing Ben Nevis

Staff at city recruitment agency Encore Personnel have gone above and beyond, raising a whopping £9,000 for its three charities, by climbing the highest mountain in the UK, Ben Nevis.

Standing at a daunting 1,345m above sea level, Ben Nevis is located in the Lochaber area of Scotland. Climbing Ben Nevis was no mean feat for the 17-strong Encore team, who persevered to reach the peak after a gruelling seven hours on Saturday (11th August).

Employees of all ages took part, with the youngest being 19-year-old Melissa Packwood and the oldest Chris Hockey, aged 53. Five of the participants had climbed Ben Nevis before, providing valuable expertise for the rest of the team.

Encore has selected three charities to fundraise for this year – Sick Children’s Trust, Cardiac Risk in the Young and CLIC Sargent (Cancer Charity for Children and Young People).

Every year, the company, which is based on Lower Temple Street in Birmingham, chooses one or more charities to support, with the decision often influenced by causes close to its employees’ hearts.

Encore is no stranger to the importance of fundraising, having already completed a variety of charity events this year, including cycling from Leicester to Skegness, bake sales and sweepstakes. With the aim to raise £10,000 from the Ben Nevis climb to divide between the charities, the Ben Nevis climb has put Encore well on its way to achieving this target.

The three chosen charities all help to support children and young people in different ways – Sick Children’s Trust provides ‘Home from Home’ accommodation and support for sick children and their families and Cardiac Risk in the Young work to reduce the frequency of young sudden cardiac death (YSCD). Likewise, CLIC Sargent is the UK’s leading cancer charity for children, young people and their families.

“I am thrilled that we were able to work together as a team to raise a substantial sum of money for charity. Tackling a task such as Ben Nevis was undoubtedly a challenge, but we were determined to succeed for such worthy causes.

“Many of us found the trek tough at times, however we were all spurred on by each other’s support and motivation throughout.”

Andy Lewis, Operations Director at Encore Personnel added: “I am proud to see the team come together to not only take on a gruelling challenge but to raise money for three such fantastic causes.

“At Encore, we understand the importance of giving back to the community and supporting charities that make a significant difference to people’s lives. Thanks to the dedication and fundraising efforts of our staff throughout the year, we have been able to support a number of causes close to our employees’ hearts and are well on our way to hitting our £20,000 target.”

To donate to the Encore team’s chosen charities, visit https://uk.virginmoneygiving.com/Team/Encore1.