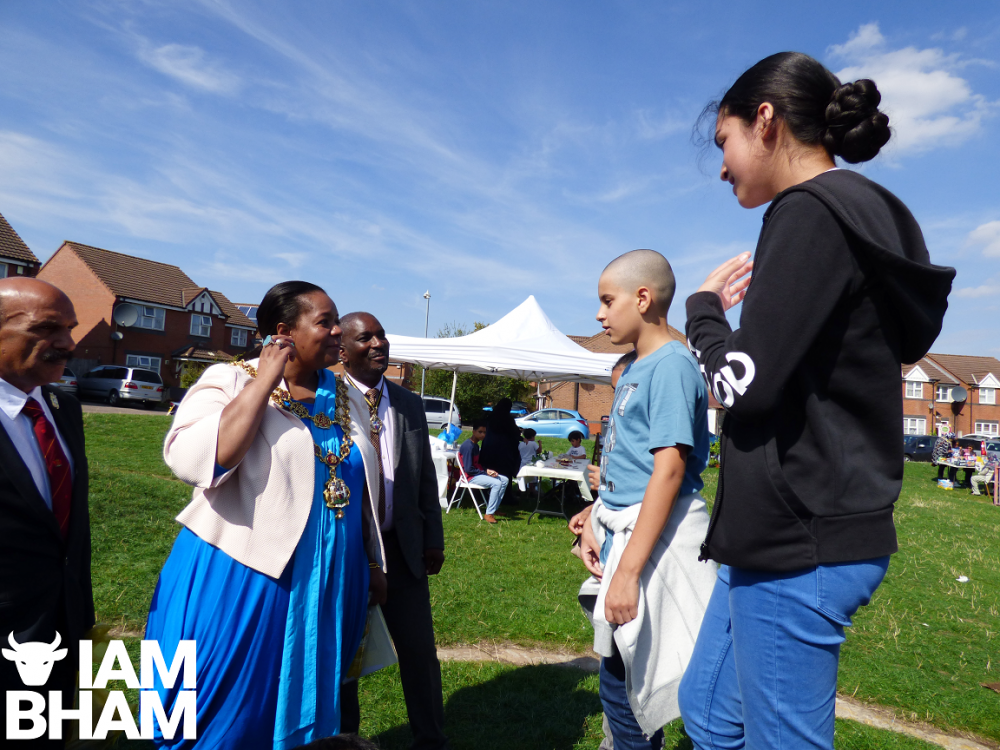 The Birmingham Lord Mayor made an appearance at a Family Fun Day in Bordesley Green yesterday, organised by community organisation Seek for Change.

Cllr Yvonne Mosquito met local parents and children at the free local event which was held at The Green in Priorygate Way.

Zeenat Akbar and Halima Ali, who run the community based Seek for Change, have been working with local residents to inspire children to realize their potential and seek positive change through workshops and activities.

The primary aims of Seek for Change are building confidence, making the best use of education, empowering women and young people, and working together for a better and more unified community.

“We are a non-profit organisation and Seek for Change has been running for two years.

“The initial aim was to empower women via a 7-step programme. We have further developed our services to include Youth Activism and provide a series of fun, interactive workshops which will enable our young people to make a smooth transition into adulthood.

“On the back of our first workshops which included personal development, Entrepreneur Skills and Event Planning, our young people decided to organize a Community Family Fun Day to utilize their skills and learning and to bring together the community.”

Cllr Mosquito made a speech about a child who was born without arms or legs, yet despite this he went on to live a successful and full life where he inspired others. Her impassioned speech emphasised that hard work, dedication, and believing dreams and aspirations are important components of success.

Seek for Change believe that every child, regardless of racial background or disability, has huge potential and that potential should be unlocked.  This ethos struck a chord with the Lord Mayor.

“It is vital that children of all races and backgrounds are given the opportunity to unlock and express their talents and succeed,” she said.

The Lord Mayor’s consort Winston Mosquito, who was raised in St Kitts, added:

“It’s so good to see children and parents enjoying the lovely weather and using the park. When I was growing up in St Kitts, the open spaces and fresh air were part of my childhood.

“We need to wean kids off their mobile devices and get them to enjoy their local parks with their families and friends.”

Cllr Mosquito was joined by Chaudry A. Khaliq, who represents Roger Godsiff, the Labour MP for Hall Green.  Together, Mosquito and Khaliq spoke to local residents who have taken steps to reclaim their neighbourhoods from falling into decline.

Amongst those they addressed were Ifzal Hussain and Azkar Mohammed, who are part of the Community Custodians and Pioneers Youth Club; and Javed Iqbal from the Alum Rock Community Forum, who all operate local street patrol schemes and community projects which aim to inspire children to work and play together.

A promise to offer support and advice and ensure that parks are kept open for the local people were made by the Lord Mayor to the community activists. Locals were encouraged to attend surgeries and ask their local councillors about tackling any issues currently affecting the community.

In her role as Lord Mayor, Cllr Mosquito hopes to get parents to take pride in their local areas and reclaim the community spirit which has eroded in recent years:

“I want to focus on positive energy and positive stories which will inspire the children to be more confident and united.”

Cllr Mariam Khan (Lab), who represents the Alum Rock ward, also attended and oversaw a stand where the children were working on an art project.

She spoke about the importance of taking an active role in the lives of young children and providing them with activities that allow them an opportunity to open up their imaginations to new ideas and concepts using arts and crafts.

The park where the event was held had several distinct sections, offering visitors a chance to try their hands at archery, badminton, painting, or relax and sit back on the grass and listen to a musical performance by Jaspal Singh; while there was a bouncy castle and a play area for younger children.

Local businesses had some of their wares on display, ranging from exotic dresses from India, veils and shawls from Afghanistan, home-made cakes and various styles of footwear from Pakistan, of which a very charming looking red pair of shoes was tried on by the Lord Mayor.

Cllr Mosquito also enjoyed by some of the culinary delights -including a lush chocolate cake – as she spoke to the women running the stalls, congratulating them on following their dreams by opening their own businesses.

The Lord Mayor and her consort were very impressed by some of the potted plants on sale, grown locally in the community, including mint and tomatoes, and various herbs used as natural remedies.

There was also a stall providing information about domestic violence, assistance for victims of trauma and abuse, and for women who suffer from mental health issues.

Cllr Mosquito spoke at length to Sahdaish Pall from Fair Play, who explained how she uses a game for children to illustrate the signs of abuse, and how to stay alert and safe. She is hoping to take this into schools and offer workshops to empower pupils with knowledge that will safeguard them from the dangers of grooming and abusive relationships.

Halima Ali and Zeenat Akbar had sent out alerts to those attending the Family Fun Day to bring toys, pots, pans, blankets and crockery for a women’s safe house in Birmingham. The donations were being collected at a table, and some children had even offered up their sweets and chocolates for the cause.

The Lord Mayor enjoyed the afternoon and promised to return for future local events. She expressed her thanks to the children and told them never to give up on their dreams and hopes.

“This is your city, and you are all part of it. Play together and learn to understand each other’s views. You are the future, and your views and ideas are important,” she said.