How does the Birmingham Westside Metro Extension affect you? 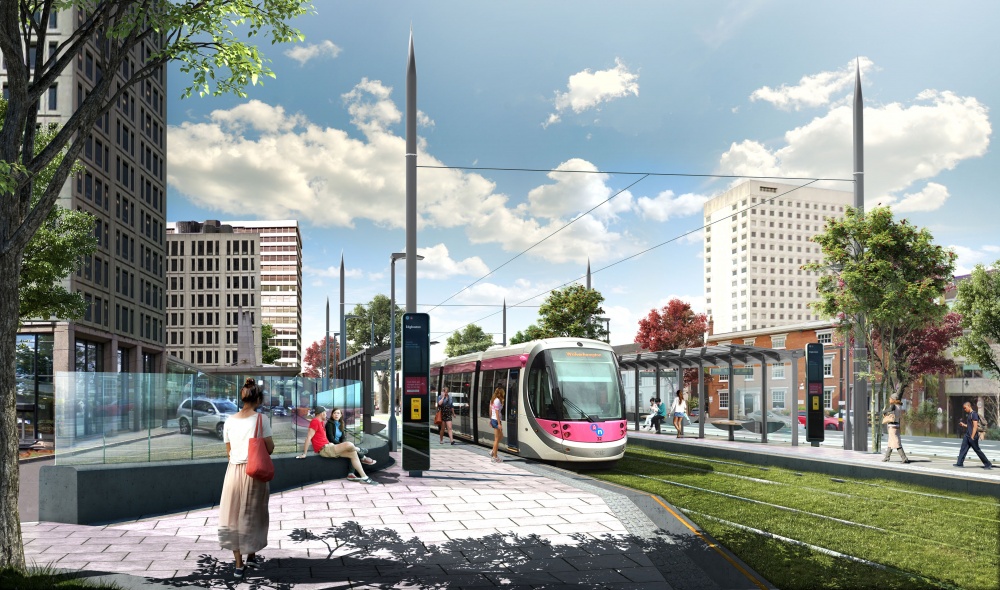 The current expansion of the overall extension will be approximately 1.35km long and together with the Hagley Road terminus will feature intermediate stops at Brindleyplace and Five Ways

So, what’s going on and how does it affect you?

The Birmingham Westside Metro Extension is the next phase of works following the Metro extension from St Chads to Grand Central which opened for passenger service in May 2016. Construction on this extension, which is a little over 2km in length and will be delivered in two phases, started in summer 2017. When fully completed the Metro will operate between Grand Central in the city centre to Hagley Road in Edgbaston.

The first phase of development will continue from Grand Central, past Birmingham’s Town Hall to Centenary Square. The extension will provide Metro stops serving Victoria Square and the Paradise and Arena Central developments at the redeveloped Centenary Square.

When this first phase of the Birmingham Westside extension is open for passengers the 840 metre route will operate on battery power throughout and will be the first tramway in the UK to do so. Metro operation on battery power removes the need to fix electric wires to the listed buildings along the route, reducing the aesthetic and environmental footprint of the project.

Phase two of the Birmingham Westside Extension will see the tramway further extended from Centenary Square along Broad Street to Hagley Road in Edgbaston (just west of Five Ways).

This part of the overall extension will be approximately 1.35km long and together with the Hagley Road terminus will feature intermediate stops at Brindleyplace and Five Ways.

The Midland Metro Alliance will be also improving the public realm as part of their works in the area project, including planting trees along the route.

What are the main benefits of this route expansion?

More people using the tram in this area for day-to-day travel, resulting in journey time savings and reduced congestion:

What is the outline programme for delivery?

Construction for the first phase of the Birmingham Westside extension to Centenary Square is already underway and passenger services are planned to commence in 2019/2020.

Construction for phase two (Centenary Square to Edgbaston) is planned to begin in 2019, with the line opening for passenger service in 2021.

Following the Transport and Works Act Order application in December 2013 and the Public Inquiry that closed in January 2014, the Secretary of State announced his decision to on the 16 May 2016, with modifications (notice and decision letter).

What service is expected to run on the extension?

The Midland Metro Alliance is working on behalf of Transport for West Midlands to construct a tram extension, which when completed, will operate from Grand Central to Hagley Road in Edgbaston.

When will the Birmingham Westside Extension open to the public?

The Birmingham Westside Extension will open in multiple phases. It is expected that trams will operate to Centenary Square by 2019/2020 and to Edgbaston by 2021/2022.

How does this extension connect to the tram currently running through Birmingham city centre?

Will this have an impact on residents, visitors, businesses and traffic in the area?

Unavoidably, there will be some disruption during the works but we aim to minimise this wherever possible.

How long are the works going to last?

Why is this being done?

When complete, the extension will allow people to travel easily between the city centre and the west of Birmingham and will be the first tramway in the UK to operate on battery power alone.

What roads will be affected?

Although we aim to minimise disruption wherever possible for public transport users, road users, businesses and residents, the works will require traffic changes to be implemented.

Will the bus services be affected?

In the short-term, access for buses along Broad Street in both directions will be maintained through temporary traffic management. There will be future bus diversion routes which will be communicated prior to being implemented.

Can I still get from Bridge Street to Broad Street by car?

Unfortunately, no. The junction of Bridge Street and Broad Street will be closed and open to pedestrians and cyclists only. Car drivers are urged to follow the clearly signed diversion routes.

Will I still be able to walk along Broad Street?

Yes, access along Broad Street will be maintained for pedestrians.

How do I get to the car park on Bishopsgate Street?

Will I still be able to drive onto Broad Street from Sheepcote Street?

There will be temporary lane restrictions on Sheepcote Street, which will allow for left turns onto Broad Street from 29 January 2018. Please follow the clearly signed diversion routes.

I have a business on Broad Street. Will access be maintained?

Access for servicing vehicles will be maintained. In addition, traffic marshals will be in place 24-hours a day to assist delivery drivers and businesses.

How will I be kept updated on the works?

You can follow the teams behind the work on: @midlandtram and Facebook: Midland Metro Alliance for regular updates.