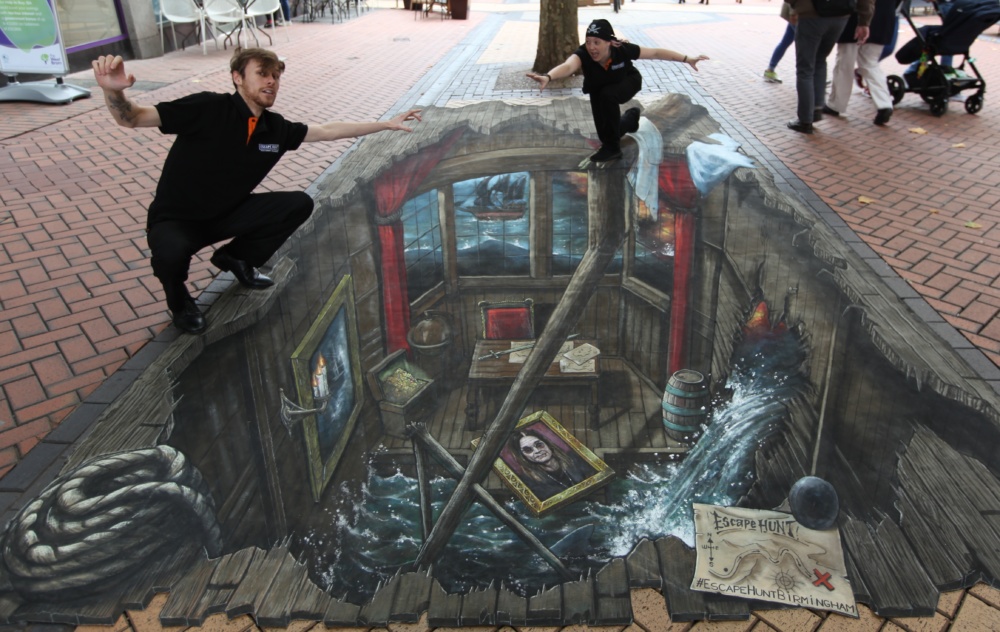 As immersive as the game, the 3D anamorphic painting includes the face of Birmingham’s very own rock legend Ozzy Osbourne.

The 3D street art captivated passers-by making them want to jump right into the artwork and help save the sinking ship right there and then. Of course, to really try and save the ship, Escape Hunt are calling for all those who want to help, to book in to Escape Hunt on Corporation Street and take on the escape room challenge.

This exhilarating new game, which opens today, transports players back in time, to the galleon of one of the most notorious pirates in history, the terrifying Captain Blackbeard. With the ship shot to pieces and sinking fast, players and their scurvy shipmates go in search of Blackbeard’s fabled loot, but find themselves trapped aboard.

With just 60 minutes before they go down with the ship, teams have to work together and solve a series of mind-bending puzzles to make their escape with the treasure and their lives.

3D Joe & Max’s brilliant spectacle on Upper New Street is one of many creations that have led the company to global fame. Artists Joe Hill and Max Lowry teamed up in 2004, taking their work out onto the street as the perfect way to make art more accessible and inclusive.

Joe Hill, one half of 3D Joe & Max, said: “Our artwork is all about engaging people so that they become a piece of the artwork by simply standing in it. Captivating people with our street art is what drives us to produce unique art time and time again and to different audiences around the world. We really enjoyed bringing the sinking Blackbeard’s galleon to life, adding a touch of Birmingham in the form of Ozzy Osbourne. We’re looking forward to stepping out of our artwork to get lost in the real escape room.”

Open to teams of between two and six players, Escape Hunt is perfect for friends, family or work mates in search of a fun and an exciting challenge. The game begins with a mission briefing from a talented Games Master, followed by an hour to crack a series of clues and puzzles.

From cryptic word play to physical dexterity, players must work as a team and break out of the room, before celebrating their escape in the premium lounge and taking advantage of the well-stocked bar.