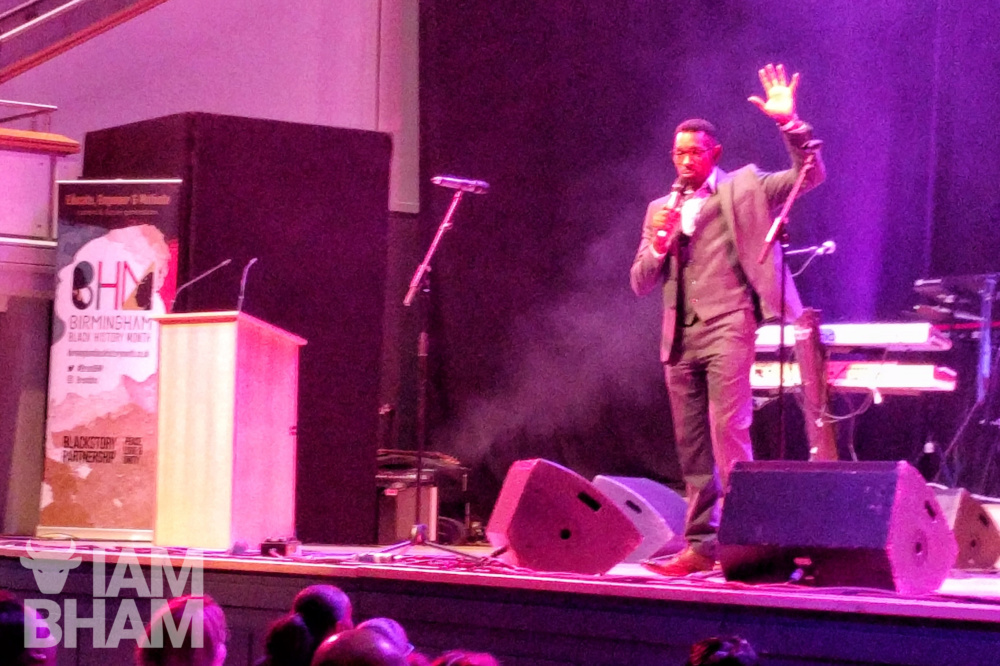 Black History Month 2018 has been launched in Birmingham and community leaders are talking about fighting for better recognition of black contributions to British culture and history.

At a special launch event marking three decades of Black History Month in the UK, an array of guests; including black music researcher Mikaell Riley and the first black woman Lord Mayor of Birmingham Yvonne Mosquito  -“actually born in Birmingham” as she presents herself – shared their praise of black community and civic progress in the city.

“London forgets about the importance of Birmingham”

40 years ago, former Brummie Mikaell Riley recorded the Handworth Revolution reggae album with Steel Pulse. While his former band colleagues continue to play under the name of Basil Gabbidon Band, Riley focuses on music research in London. At the launch event, he talked about how it’s up to all people of colour to keep and promote their cultural heritage:

“Sound system culture in this country is the cornerstone of popular music. People forget that it predates pop. The UK by the 70’s became the international capital of Jamaican music. It’s up to us to own this culture and instill it into younger generations.”

“Most important for me is the contribution that Birmingham has made, cause I’m a Brummie. And often, London forgets about the importance of Birmingham. We need to put Birmingham back on the map”

The host of the event, actor and former EastEnders star Des Coleman, said he grew up without having black role models. He also talked about how people of colour should unite their efforts to make a better future for their communities. Coleman said:

“I’ve got a bit of fame, and it’s great! I go back to Derby, where I am from, and people say ‘Dez, I’m trying to get this group of black people together and push them through life’.

“I go over to Coventry, to Wolverhampton, the same thing. Wherever I go in the country there’s individuals who are trying to help our young black folk, give them a start in life. But I always describe it as one man with a hammer against a huge brick wall. And he’s bashing this brick wall, not getting anywhere, only making a dent.

“Wouldn’t it be great if all of these individuals got together, and made a powerful force? Because then, that hammer can push through the wall”

Representing Blackstory Partnership at the event, Paulette Francis-Green talked about recognition for black people in the British history and culture. She highlighted the need to take personal responsibility in doing so:

“I consider it is our responsibility to tell our children and grandchildren about our presence in Birmingham and beyond. We need to tell them about our history here, and that we have been contributing to this city and the country.”

Celebrating 30 years of Black History month with culture and entertainment

Besides empowering speeches, the launch event entertained the audience with several reggae bands performing. While Musical Youth brought tribute songs such as I Shot the Sheriff,  the Basil Gabbidon Band performed the iconic Handsworth Revolution.

The evening ended with the stage performance of Dr. King: the Aftermath, written and directed by Tonia Daley Campbell.

Watch the video overview with highlights of the evening: