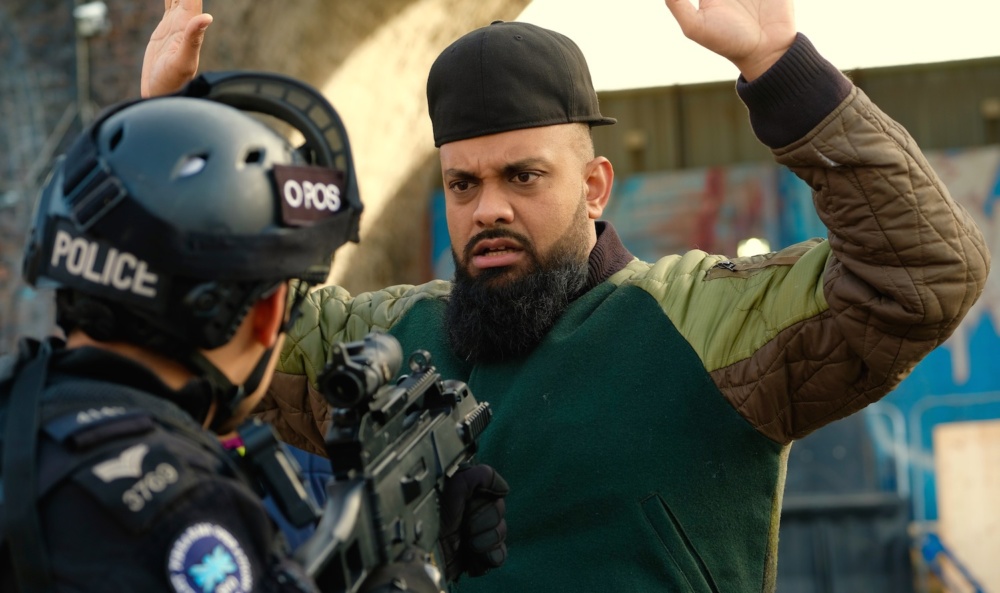 Comedian and actor Guz Khan surprised Birmingham residents today, as the star of the BBC comedy series ‘Man Like Mobeen’ was spotted filming the second series of the hit show in Small Heath.

Aubrey Road in Small Heath was under the showbiz spotlight this afternoon as lighting technicians and sound engineers filmed cast and crew for a brand new episode of BBC Three show ‘Man Like Mobeen’.

As local residents watched from the sides, the streets remained open to all traffic, while the show was filmed with limited cordon and disruption to the surrounding community.

Phones were out as many locals were eager to grab a photo of the stars, with excited chatter suggesting the BBC production was more than welcome in the area.

Production crew were well hidden from camera view, behind a wall, as large vehicles carrying all the recording equipment were parked on Somerville Road, directly opposite the filming location.

Filming in Small Heath today, Guz Khan was seen in character as Mobeen, leaning back on a sofa in a front garden while chattng to his co-stars Tez Ilyas (who plays Eight) and Tolulope Ogunmefun (who plays Nate); as they sat a wall opposite Mobeen. Duaa Karim, who plays Mobeen’s sister Aqsa, was watching from the open door of the terraced house.

Unlike a lot of television dramas filmed in Birmingham, Man Like Mobeen – starring former Coventry school teacher turned comic Guz Khan – is actually based in Small Heath in the city too.

Following a successful pilot as a Comedy Feed (now Comedy Slices) for BBC Three in 2016, Man Like Mobeen was picked up for an initial full series by the channel, which was broadcast on BBC iPlayer earlier this year.

In the show, 32-year-old Khan plays Mobeen, a 28-year-old from Small Heath in Birmingham. Mobeen has a job, doesn’t know any terrorists, is pretty excellent when it comes to social skills but might have dealt drugs for a little bit.

Mobeen has many challenges in life – the biggest one being providing for his younger sister Aqsa. He does this alone, acting as “a very hairy mother, father and brother figure in the hood”.

Mobeen’s parents have done a disappearing act that would make the love child of David Blaine and Dynamo proud, leaving the reluctant hero with the full financial and emotional responsibility of the ‘family’ they’ve left behind in Birmingham.

All Mobeen wants to do is follow his faith, lead a good life, and make sure his younger sister fulfils her potential. But his struggle to juggle this, with his criminal reputation and murky past always chasing him, makes for great television.

Guz Khan says: “Mobeen as a character epitomises the funny yet complex realities of life for young working class men and women in Britain today. Inner city Birmingham, in which the show is set, gets almost no positive representation in the media.

“Man Like Mobeen will at the very least give a ‘real’ depiction of life in the ends. I’m so honoured to be able to bring this character to you and I hope the people of Brum will be proud of what we produce, and have a real character that they can finally relate to.”

Here’s more photos of Man Like Mobeen in production in Small Heath:

The first series of Man Like Mobeen is still available to watch on BBC iPlayer here.