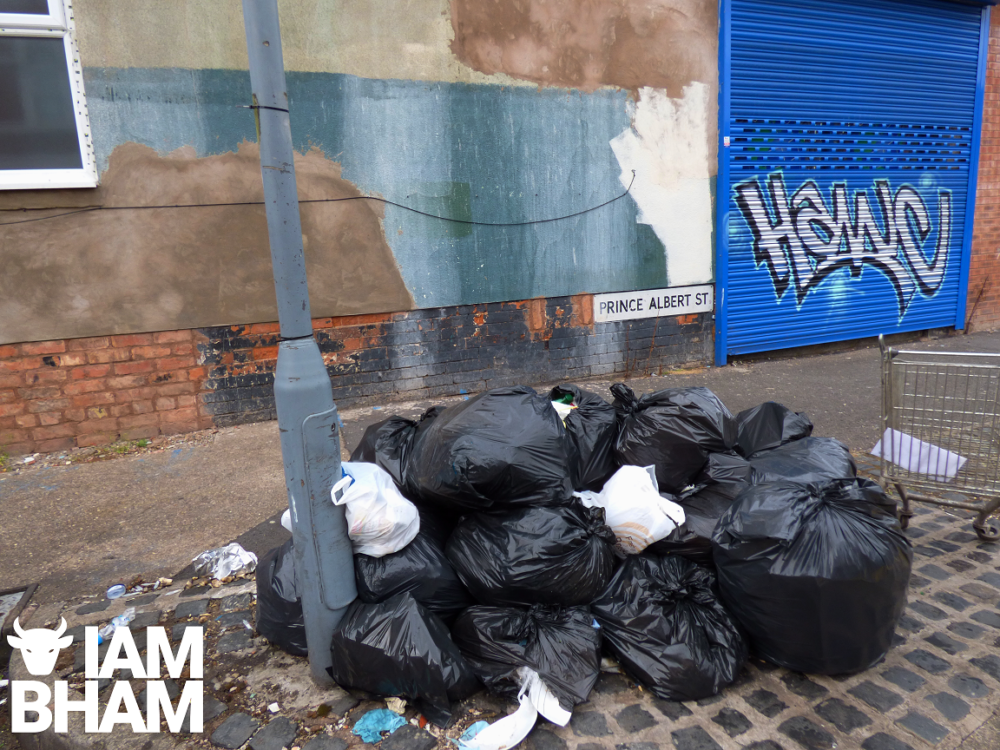 Several major wards in Birmingham have been neglected by council refuse collections for the past two weeks, according to local residents.

Growing anger has resulted in an apology being made by a city councillor, in response to the uncollected household rubbish piling up in inner city streets, leading to public health concerns.

One elderly homeowner who lives on Mansel Road in Small Heath said, “I telephoned the Waste Management team and was answered by an automated service that failed to offer any help whatsoever.”

The lack of response has led to frustration by many local residents in Small Heath and Bordesley Green, who have resorted to sending messages to local neighbourhood watch teams, asking for assistance and questioning why the refuse collections have been missed for two weeks in a row.

Some of the street corners in Small Heath, Bordesley Green, and Ward End have been piling up with black bin bags by residents whose wheelie bins are now full or overflowing.

“Cats have started tearing into the piles of black bin bags and, at night, the rats crawl all over the rubbish. The pavement is sticky where the rubbish has scattered and I’ve seen kids kicking trash on their way to school in the morning. This is a public health issue now.”

“The street stinks from the uncollected rubbish, and it gets worse with each passing day. If I miss my payment for Council Tax, I immediately get a reminder followed by the threat of legal action, yet nothing happens when the Council fails to deliver an essential public service.”

“As the Cabinet Member for Clean Streets, Waste and Recycling, I would like to apologise for the dropped collections. We have been operating a new model for each property (around 360,000) since the 24th September.

“The new model is designed to be more efficient, and effective for citizens. However, there has been some disruption with the change in routes which had led to some dropped collections. It is clear that when you change a model for so many properties, it will take time for the new routes, and way of working, to bed in.

“I confirm that some rapid response crews have now been deployed to mop up the dropped collections, and you will see an improvement in the few days. In the longer term the new way of working and the new role of Waste, Refuse Collection Officer will bring tangible benefits to the city.

“The changes to the operating model, and the new role for the Waste, Refuse Collection Officers (WRCO) affects collection from 359,561 properties across the city (not including high rise tower blocks or flats above shops). A number of crews have been deployed across different parts of the city due to the changing roles, and new routes offered.

“It will take time for the crews to work out their best routes, i.e. shortest time so we expected some disruption. To alleviate the disruption, we set aside a budget for rapid response crews who are now operational. The disruption is primarily around parts of the city served by the Lifford Lane and Redfern depot. As advised, it will take time to bed in but once we are settled, you will see the benefits realised from such a change with WRCO taking a more proactive stance with citizen and business engagement.”

The response to this change hasn’t provided comfort for everyone living in the overlooked areas.

“The lack of information and consultation is beyond belief. No one was informed about this change in the delivery of a vital public service.

“The details on the Birmingham City Council website are brief, and some residents, including my elderly neighbours, do not know how to access and navigate the complicated nature of the Council website and read about the changes.

“At the very least there should have been a leaflet sent out to the areas where Waste Management Services were implementing the changes.”

One resident of Small Heath, who lives on Marlborough Road but wishes to remain anonymous said, “I have lived all my life in Small Heath, and I love this area, and it saddens me to see this area being neglected time and time again. It is as if we are second-class citizens, not worthy of investments to our streets and parks.

“The decline to services has been drastic and this recent dropped collections is another indication that this area is not important when it comes to providing clean streets. Next Monday will mark the beginning of week three since the wheelie bins were emptied in this area. That says something about the way this area is seen by those in public office.”

On Friday 5th October, Councillor Majid Mahmood offered an additional promise to residents who have endured repeated missed collections by announcing, “The crews are working over the weekend [6th and 7th October] to pick up the missed collections.”

However, despite this promise, the streets remained clogged with uncollected wheelie bins over the weekend, and it looks unlikely that the dropped refuse collections will be picked up as stated.

Mrs Ali from Green Lane in Bordesley Green was unimpressed by what appeared to be an empty pledge:

“It’s now Sunday, and my bins haven’t been collected for the past two weeks. Politicians make promises but we haven’t seen any refuse collection on our street.

“Tomorrow will be the start of week three of rubbish piling up on this street with no refuse collection.

“You can hear the rats fighting inside the black bins bags at night. When will our streets be cleaned? What is going on?”