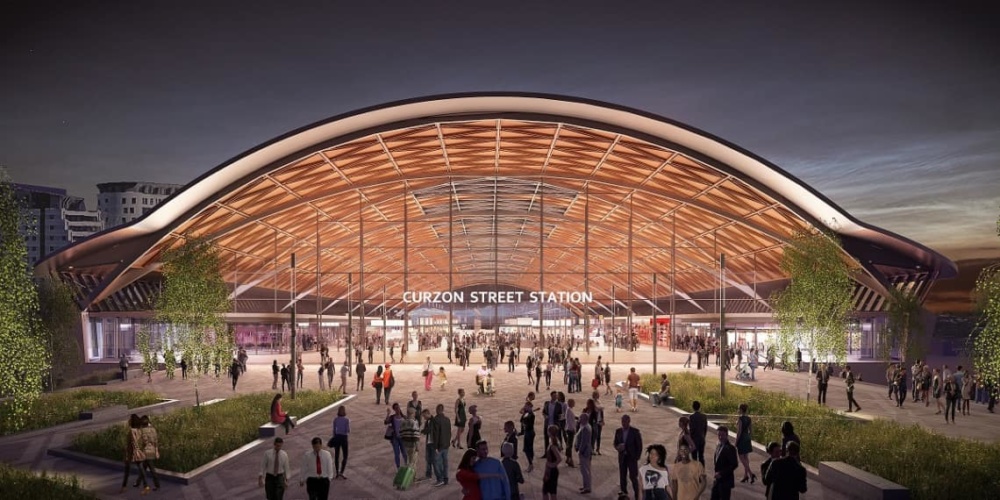 Set to be the first new intercity railway station built in Britain since the 19th century at a cost of millions of pounds and much controversy, concept designs for the new HS2 Curzon Street station were launched today.

As slick computer generated designs for the new station were published this morning with great fanfare, a Birmingham MP summed up Birmingham’s proposed new high-speed rail network station as “a railway shed.” Ouch.

The bright and shiny new images revealing the planned Curzon Street station in Birmingham city centre and Interchange station in Solihull, but not everyone has been impressed by the unveiling.

Labour MP Liam Byrne wrote on to Twitter: “Hmmm. I hope the designs look better closer up … looks like a pretty traditional railway shed from this view….”

The Member of Parliament for Birmingham Hodge Hill also called for a science museum to be included in the designs, commenting:

“Personally I’ll be campaigning for the station to include the greatest science museum in Britain. Passengers should know they’re arriving in the home of the industrial revolution!”

The highly controversial £57billion rail project – which has sparked public demonstrations and scandals around increasing costs – is due to open with seven high speed platforms in 2026, and is set to be the first new intercity station built in Britain since the 19th century, with work having begun at the Curzon Street site last week.

The state-of-the-art station will be linked to the tram network and to rail networks across Birmingham and the West Midlands.

“Interchange station sits within a unique setting, on the edge of the urban landscape in a currently rural location. The station building has been designed to reflect its surroundings and in context with the natural landscape and topography.

“The station roof has been designed to fit in with the surrounding landscape, and to optimise natural daylight using an integrated, efficient structural form and rainwater management system. We have also focused on a number of objectives including creating a positive experience for future users and rail passengers by including open space, parkland and views to green spaces, and constructing a green building with low energy consumption and low maintenance.”

Andy Street, mayor of the West Midlands, responded: “These brand new stations will be catalysts for regeneration, creating jobs and opportunities for local people and economic benefits for Birmingham and the Midlands.

“Curzon Street station will put Birmingham at the heart of Britain’s new high speed network and enhance the rail connectivity for the city, whilst Interchange provides a once-in-a-lifetime opportunity to help drive the growth of the region.”

Govenment Minister Nusrat Ghani, tasked with the responsibility for HS2, added: “Unveiling the station designs for Curzon Street and the Solihull Interchange is a milestone moment.”

The history of Curzon Street Station

The plans for the new developments at Curzon Street in central Birmingham and Interchange Station in Solihull will be displayed at Birmingham Library to allow members of the public to give feedback. Feedback can also be shared online here.