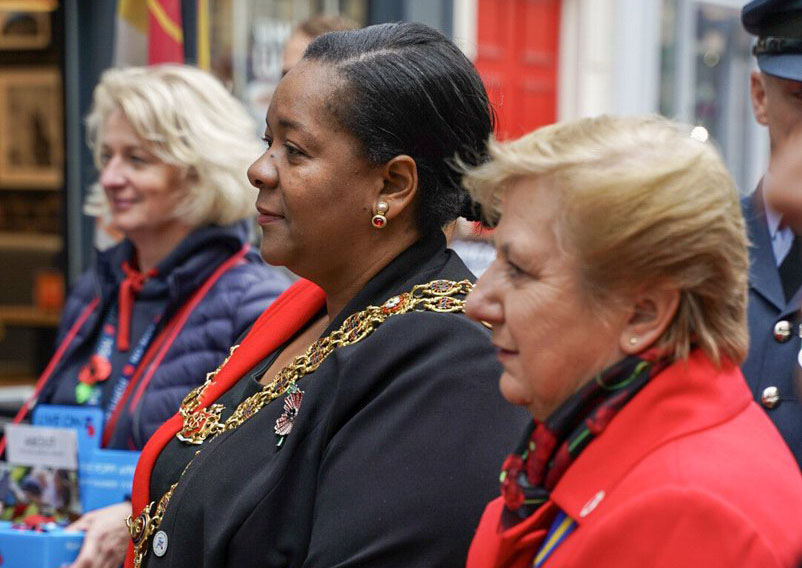 The Lord Mayor of Birmingham, Yvonne Mosquito, will lead the official Day of Remembrance services in Birmingham (Image: RBL WM)

A Day of National Remembrance Service will take place on Colmore Row, opposite St Philip’s Cathedral, on 11 November, attended by military veterans and representatives of the region’s armed forces.

The parade will include ex-service personnel, regular, reserve and cadet units from the Armed Forces who, with representatives of other local uniformed organisations, will march on from Temple Row from 10.30am.

At 10.50am the Lord Mayor of Birmingham, Cllr Yvonne Mosquito, and Chaplain Rev Msg Canon Robert Corrigan will – along with senior representatives from the Army, Royal Air Force and Royal Navy – walk from the Council House to Colmore Row. The service will begin at 10.55am.

A two minute silence will be observed at 11am, after which wreaths will be laid at the Cenotaph by Armed Forces representatives, veterans and dignitaries. The event will end with a march past at 11.40am.

What is the service programme?

10.30am: Uniformed contingents march on.

10.40am: Standards and Associations march on.

10.50am: The Lord Mayor’s party will proceed from the Council House
in the following order:

Arriving at the dais, The Lord Mayor’s party takes up position,
facing the Parade.

The Service of Remembrance

Conducted by the Chaplain

Act of Remembrance – the Chaplain will say:
Let us remember before God, and commend to his sure keeping:
Those who have died for their country in war;
Those whom we knew, and whose memory we treasure
And all those who lived and died in the service of humanity.

Act of Commemoration – The Lord Mayor will say:
“They shall grow not old as we that are left grow old:
Age shall not weary them, nor the years condemn.
At the going down of the sun and in the morning we will remember them.”

All will respond: “We will remember them.”

11.00am: Volley of rifle fire by soldiers from 37 Signal Regiment.
(All V.I.Ps, and Officers Commanding Detachments to salute
at commencement of The Last Post until the last note, then
remain standing to attention.

11.02am Volley of rifle fire by soldiers from 37 Signal Regiment.
(No-one to salute)

When you go home tell them of us and say, for your tomorrow we gave our today.

The Lord Mayor will then lay a wreath on behalf of the City at the foot of the Cenotaph.

Head of Service will lay their wreaths.

Other organisations will lay wreaths under the instruction of the RSM, as announced.
The band will lead the singing of the hymn “O God our Help in Ages Past”.

Before the singing of the hymn, the Military Band will play over the first two lines of the tune.

1. O GOD, our help in ages past,
Our hope for years to come,
Our Shelter from the stormy blast,
And our eternal home.

2. Beneath the shadows of Thy Throne,
Thy Saints have dwelt secure,
Sufficient is Thine Arm alone,
And our defence is sure.

3. Before the hills in order stood,
Or earth received her frame,
From everlasting, Thou art God,
To endless years the same.

4. A thousand ages in thy sight,
Are like an evening gone,
Short as the watch that ends the night,
Before the rising sun.

5. 0 God our help in ages past,
Our hope for years to come,
Be Thou our guard while troubles last,
And our eternal Home.

Act of Commitment – the Chaplain will say:
Let us pledge ourselves anew to the service of God and our fellow men;
that we may help, encourage and comfort others and support those working for
the relief of the needy and for the peace and welfare of the nations.

We say together:
Lord God our Father we pledge ourselves
to serve you and all people in the cause of peace,
For the relief of want and suffering and for the praise of your name.
Guide us by your spirit;
Give us wisdom;
Give us courage;
Give us hope;
And keep us faithful now and always.
Amen

All will say: The Lord’s Prayer.
Our Father
Which art in heaven
Hallowed be thy name
Thy Kingdom come
Thy will be done
In earth as it is in heaven
Give us this day our daily bread
And forgive us our trespasses
As we forgive them that trespass
against us
And lead us not into temptation
But deliver us from evil
For thine is the kingdom
The Power and the glory
For ever and ever. AMEN

(V.I.Ps, Parade Commander, Officers Commanding Detachments and
all ranks not with Detachments to salute).

The Band will move into position ready to lead the Ex-Service Associations,
Service and Civil contingents from Colmore Row.

The Parade will proceed along Colmore Row, and do a complete circuit of
Cathedral Square and will disperse in Eden Place.

Opportunity for members of the public to lay wreaths at the Cenotaph.
Parade Commander: Lieutenant Colonel R Lovett,
Royal Signals.