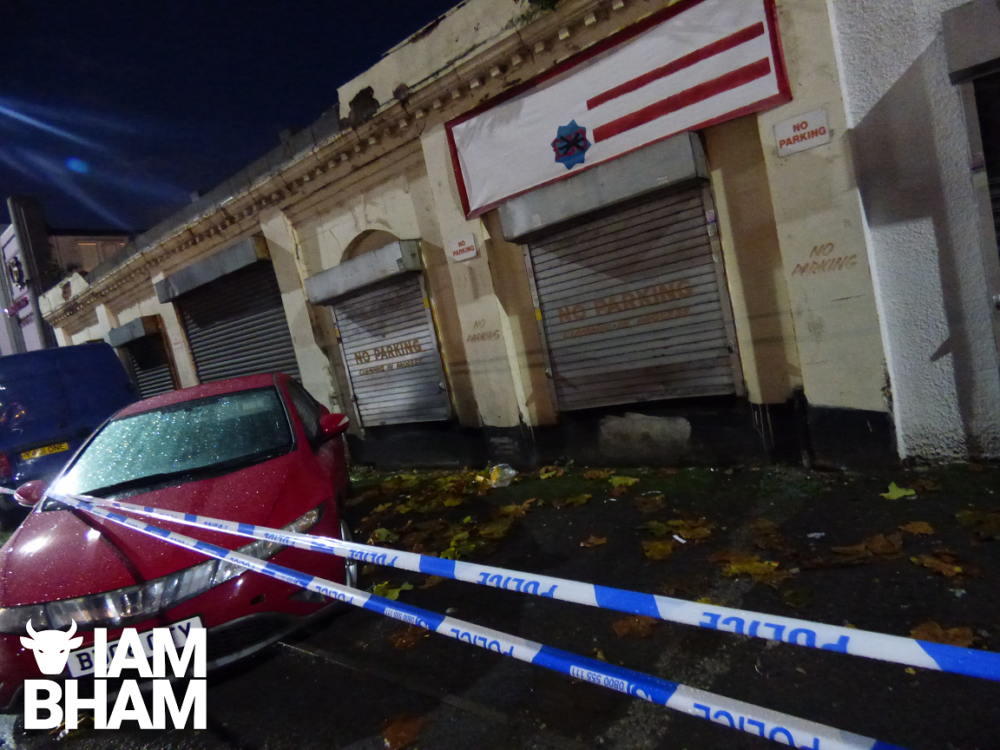 The scene of the crime remains sealed but Walford Road in Sparkbrook has re-opened to traffic (Photo: Rangzeb Hussain)

West Midlands Police continue their investigation into the tragic death of a man who was discovered with fatal injuries on a Sparkbrook street on Tuesday night.

The scene where the man was found is still sealed off by police tape while there is a police presence in unmarked cars.

Detectives are piecing together the events that led to the killing and are currently interviewing three individuals who are in custody.

A police officer at the scene this evening confirmed that the three suspects who are currently under arrest, aged 29, 43, and 59, lived at an upstairs flat next to the ‘Car Hospital’ garage on Walford Road.

The officer told I Am Birmingham: “The investigation is still putting together details but we do know that the alleged attackers of the vagrant man lived in the flat upstairs next to the Car Hospital. An alcohol induced argument is alleged to have erupted into violence.”

The victim, who has yet to be identified, will be given a forensic post mortem on Thursday.

Chief Inspector Edward Foster, from the West Midlands Homicide Team, issued a statement: “We are still piecing together the events of last night and would ask for the help of the public.

“We are appealing for anyone who may have seen or heard anything, no matter how insignificant they believe it maybe, to get in touch as soon as possible.”

Detectives initially launched a murder investigation after a man was found with fatal injuries in Walford Road on November 6.

Police were called to reports of suspicious activity just after 7pm on Tuesday.

On arrival, they found the man with serious injuries and despite the best efforts of medics he was pronounced dead at the scene.

Three men have since been arrested on suspicion of murder and are currently in police custody for questioning.

Local residents are alarmed at the rise in knife crime in the area. One resident, who was at the scene tonight, but did not want to be named, said: “I’ve lived in Sparkbrook for 52 years and I’ve never seen this type of violence.

“Just the other day, over on Wordsworth Road in Small Heath, a man was stabbed in the head. And before that we had a summer where a wave of shootings and stabbings were taking place almost on a daily basis.

“The cutbacks to the police means we have criminals becoming more daring and blatant.”

Anyone who has information relating to the crime that took place on Walford Road can contact West Midlands Police via Live Chat at west-midlands.police.uk between 8am to midnight, call 101 anytime or contact Crimestoppers anonymously on 0800 555 111. Quote log number 2488 of 6/11/18.

(Visited 935 times, 1 visits today)
https://www.iambirmingham.co.uk/2018/11/07/walford-road-re-opens-murder-investigation-continues-sparkbrook/https://www.iambirmingham.co.uk/wp-content/uploads/2018/11/P2320357A-800x600.pnghttps://www.iambirmingham.co.uk/wp-content/uploads/2018/11/P2320357A-300x225.png2018-11-08T03:01:55+00:00Rangzeb HussainCrimeNewsVideosBirmingham City Council,Brum,Car Hospital,Chief Inspector Edward Foster,Crime,I Am Birmingham,murder,news,Police,police officers,Rangzeb Hussain,Small Heath,Sparkbrook,Walford Road,Watford Road,West Midlands,West Midlands Police,Witnesses,WMPWest Midlands Police continue their investigation into the tragic death of a man who was discovered with fatal injuries on a Sparkbrook street on Tuesday night. The scene where the man was found is still sealed off by police tape while there is a police presence in unmarked cars. Detectives are...Rangzeb HussainRangzeb Hussain[email protected]AuthorI Am Birmingham
« Birmingham to honour the fallen at city centre Remembrance Service this weekend
Brand new statue honouring Sikh soldiers vandalised, only a week after being unveiled »