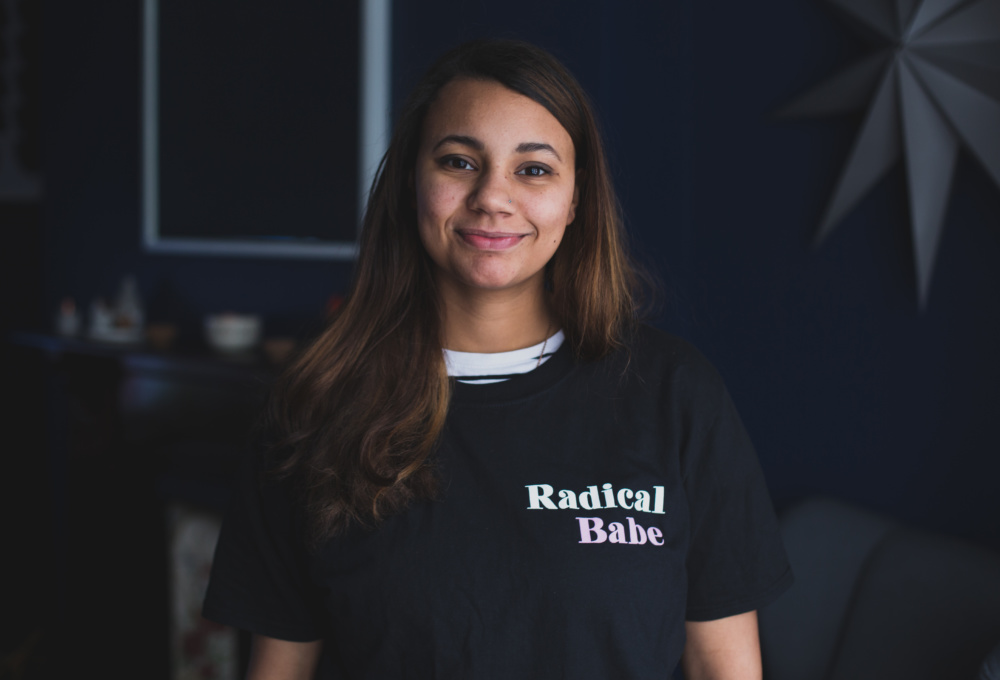 Throughout history, Birmingham has always been a city of trades, entrepreneurs and a strong DIY attitude. Over the years, the city has evolved but its ‘roll your sleeves up and get it done’ mentality has always stayed the same.

In this series, I Am Birmingham will be shining the spotlight on some of our city’s stars, and we want you to get involved.

24-year-old Jordan Garvey from Moseley is a writer, artist and designer. On her creative journey, she’s launched The Blogatory, her writing, consulting and design business, as well as The Bloom Co., designing and producing home decor; before creating her own brand of ethnical clothing, named Rad Bab – short for Radical Babe. We caught up with Jordan to find out more.

Hi Jordan, tell us a little bit more about the work that you do?

Alright bab! I design clothing with a regional feel, I’m mega proud to be a Brummie (if you couldn’t already tell). All my work is screen printed at home, by hand and it’s been important for me to source T-shirts and sweatshirts that are ethical.

I want my customers to buy my products knowing that the tee they’re wearing was made by someone who works in good conditions, is paid well and manufactured in a factory with low emissions.

I’m inspired by radicalism (the good kind) and this city, and I think that are a lot of amazing people in this city making waves. I wanted to be part of that but in a creative way that lifts up and celebrates Birmingham and makes people proud to be from Birmingham.

What do you love about being based in Birmingham?

I guess the obvious thing is that I get to meet the people my products are intended for, but it also gives me a lot of inspiration for my work and designs.

Tell us about your connections to Brum? What keeps you here?

It’s certainly not the weather! I was born and raised here, so it’s home and, honestly, I believe there’s nowhere else in the UK I’d like to live. Majority of my family live here but what truly keeps me here is the warmth of this city, it’s such a welcoming place to live.

How would you describe the city?

To me, Birmingham is a jigsaw puzzle. You have all these pieces that don’t look the same and not quite sure how they’re going to fit but somehow, they just do. When you piece them together, what you get is this gorgeous city, an amalgamation of cultures, architecture and trades, we have a rich history that is something to be proud of.

What do you think needs to change?

The thing about Birmingham is that it’s always changing, so I think the question is, how can we change Birmingham so it works for its people and not everybody else? We’re a great city but looking back, it seems we have an inherent need to keep up with other cities, namely, London. It’s a shame because the magic in our identity is that we aren’t London so we shouldn’t try to be. We’ve lost a lot of our trades but we are the youngest city in Europe and that is where our future lies, the young people in this city. They are the key to making Birmingham work for us, not big corporations.

What are your hopes for the future of Birmingham?

I hope that we can stay true to our identity. A lot of changes are happening to the city’s infrastructure, HS2 is the biggest example. A city does need to change and innovate but I hope we can keep the Brummie essence while we build on the city.

What can we expect from Rad Bab in the future?

I’m always working on new design ideas, some which make it into the shop, some that don’t but I might save for future inspiration. Currently, I’m working on a campaign to celebrate Birmingham.

What a great way to kick off the series, remember if you want to be featured, or know someone that should, drop us a message or a tweet and let us know!

(Visited 389 times, 1 visits today)
https://www.iambirmingham.co.uk/2018/11/15/brilliant-brummies-jordan-garvey-founder-of-rad-bab/https://www.iambirmingham.co.uk/wp-content/uploads/2018/11/JordHeadshots-3-of-8-800x544.jpghttps://www.iambirmingham.co.uk/wp-content/uploads/2018/11/JordHeadshots-3-of-8-300x204.jpg2018-11-15T20:00:34+00:00Paul StringerBrilliant BrummiesBrumFeedBusinessCommunityFashionInterviewsLifestyleNewsWomxnYoung people#BrilliantBrum,#BrilliantBrummies,B'ham,Bab,Birmingham,brand,Brilliant Brum,Brilliant Brummies,Brummie,Brummies,Brummy,clothing,clothing brand,ethical,I Am Bham,I Am Birmingham,Jordan Garvey,merch,Merchandise,Paul Stringer,Rad Bab,RadBab,Radical,screen printing,wearThroughout history, Birmingham has always been a city of trades, entrepreneurs and a strong DIY attitude. Over the years, the city has evolved but its ‘roll your sleeves up and get it done’ mentality has always stayed the same. In this series, I Am Birmingham will be shining the spotlight...Paul StringerPaul Stringer[email protected]AuthorI Am Birmingham
« VIDEO: Suffragette mosaic revealed at New Street station in Birmingham
Urgent police appeal after man was injured in Handsworth shooting »