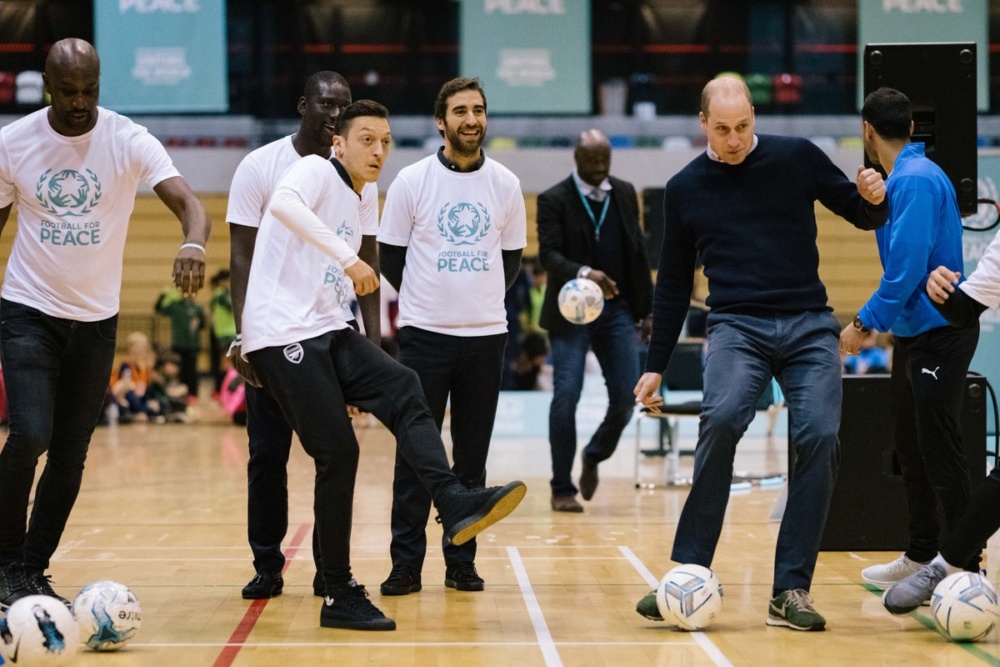 Prince William joined celebrated football stars and ambassadors yesterday, to help launch a new campaign encouraging young people to use the sport to come together in communities across the country.

The Duke of Cambridge showed his support for the #FootballSavesLives campaign, which is aiming to train the next generation of young leaders “to harness a shared passion for football to bring together their local communities”, according to campaign organisers.

Taking part in a friendly peace tournament attended by popular footballers Mesut Ozil, Louis Saha and Bacary Sagna, the British royal was all smiles as he attended a workshop on tolerance and team building at the Copper Box Arena in London’s Queen Elizabeth Olympic Park.

He was also joined by football talent Mamadou Sakho, Carlton Cole, Cherno Samba and Avram Grant alongside newly trained Young Peace Leaders who have completed a programme to manage teams from different schools across the borough of Newham.

Football for Peace works with local councils, football clubs and schools to train young people aged 15-18 to unite their communities on and off the pitch, from running local football tournaments to organising classroom workshops to discuss the issues currently dividing their communities. Yesterday’s prestigious event honoured the Young Peace Leaders from across the UK who had graduated from the City for Peace initiative earlier this year.

“I am delighted that the Football Saves Lives campaign, launched today, will see more of you trained to bring young people from across the country together. Football is not just a game. It is part of the fabric of this nation – providing a common interest and a unifying identity. It brings us together in the enjoyment of a simple pastime, without complication but with plenty of passion!”

“With the Football Saves Lives campaign, we want to encourage all football lovers and peace defenders to support our pledge to train the next generation of Young Peace Leaders to create more peaceful and tolerant communities across the UK. These schools in normal instance, hardly mix let alone play on same teams, the country needs more integration activities”.

Arsenal player Mesut Ozil added: “I am proud to support an initiative which brings people together in the such divided times we are living in”.