OPINION: Is this the erasure of Birmingham’s LGBTQ+ scene? 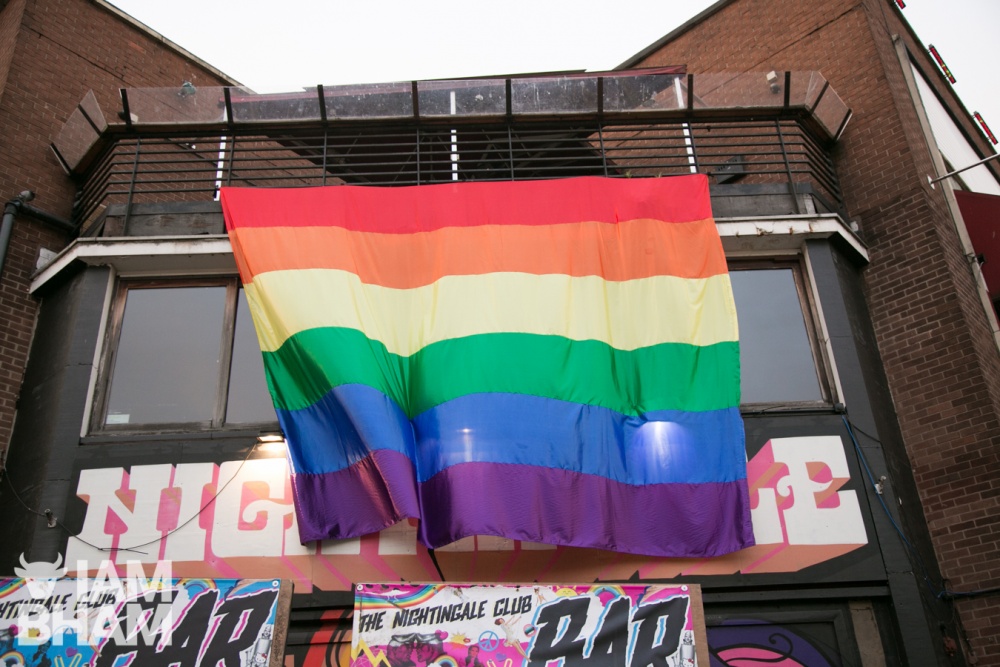 Today, the heart of Birmingham’s LGTBQ+ scene, a community spanning clubs and safe spaces for all, has made a heartfelt plea. The plea is quite simple, our community is under threat and we need all the help we can get to protect it from being destroyed.

Frequent visitors to Birmingham’s LGBTQ+ quarter within the Southside district would have noticed extensive construction work taking place over the last few months. This major residential development is of great concern with car parks, that have typically housed the main stages of Birmingham Pride, and land already occupied by LGBTQ+ business, being recommended for planning permission.

Despite objections from the pillars of our community, this land has been purchased by property developers with the aim of creating new residential apartment blocks.

In a Facebook post shared this week by popular city venues including Loft Lounge and The Nightingale Club, representatives from the city’s Gay Quarter state:

“Our community is under threat! We need you!

“If you are a frequent visitor to Hurst street and the surrounding areas within the Southside district or have visited in recent months, you will have noticed that it is currently subject to major residential development.

“Car parks within close proximity to well known LGBTQ+ businesses are being purchased by property developers for demolition and development in to new residential apartment blocks.

“Land currently occupied by LGBTQ+ businesses have already been recommended for planning permission to Birmingham City Council despite our objections and concerns! This is our last chance to stop further development and safeguard our community! But we must act now!

“The threat of noise complaints and the loss of these venues, support groups and other businesses threatens our community and our safe space.”

This development mirrors that of Birmingham’s famous ‘Blackbox’ in Digbeth which was a thriving venue within the once derelict Digbeth.

In a lengthy facebook post published back in October 2018, they announced they had no option but to close with immediate effect due to property development in the area. Unknown to the owners, a three-bedroom apartment had been developed next door to the venue and due to noise complaints, despite negotiations, they had no option but to cease trading lest be locked into a long term lease with no license which would cause catastrophic financial complications.

Though Birmingham’s housing issue is, of course, of great concern, it appears that the city is happy to uproot its proud culture, history and community scenes to combat this. The selling of land and property to luxury developers in the heart of these communities is direct evidence of this. With even larger scale developments occurring over the city’s LGBTQ+ scene, it is evident that unless action is taken, the once thriving quarter will fall – just as Blackbox did.

It’s easy to get lost in the facts and the figures when it comes to this but we need to view this from another element too. From where I’m standing, it appears that the city that I’ve given so much to is happy to turn a blind eye to the community that I’ve found a family within.

It’s not easy coming to terms with your sexuality or your gender identity. It’s a terrifying time for many and it’s no surprise that those that identify as LGBTQ+ have a higher chance of suffering from a mental health illness. Nearly half of trans people under 26 in the UK state that they have attempted suicide, and one in five LGBTQ+ individuals have stated that they had experienced a hate crime or incident because of their sexual orientation and/or gender identity in the last 12 months, according to Stonewall.

For this reason, all of these people who feel so isolated, so scared and so lost in a heteronormative world can find solace in the queer community – and Birmingham’s is thriving.

It’s a luxury I feel I’ve taken for granted and one that I will fight tooth and nail to keep. Birmingham is known for many things – it’s a city of a thousand trades and it’s got the youngest population in Europe – but one thing we cannot let it be known for is the erasure of this key safe space for some of its most vulnerable citizens.

This Thursday (December 20), a planning meeting will be held at the Council House in Victoria Square at 11am. If the queer community turns out to this in their droves we have the potential to stop the destruction of our gay village.

Last year at Birmingham Pride, I interviewed West Midlands Metro Mayor Andy Street who, when challenged on what he was doing to uplift marginalised groups in the region, stated it was about asking the question as to why there are not more leaders from minority communities in leadership positions. I must admit I have a lot of respect for Andy Street and the work he has done in Birmingham thus far. However, on reflection, it’s difficult to uplift marginalised groups if you do not challenge the erasure of their communities and their livelihoods.

Our community was born out of activism and protest for our right to exist and it’s time to return to our roots.

Birmingham’s queer community fought throughout the 80s and 90s for this space to even be available and accessible to a community ignored by the establishment. Through adversity, they pushed forwards to build up our vibrant scene and queer events that exist to this day.

This fight must go on. This fight is for those that have got to experience, and also for those queer youth who are yet to experience, this home that we have built for ourselves. If you can’t attend – email the council, email your MPs or just share this message out. Make your voice heard!

This is for the queer youth that have yet to find solace in this safe space.

(Visited 1,302 times, 1 visits today)
https://www.iambirmingham.co.uk/2018/12/16/opinion-erasure-birminghams-lgbtq-scene/https://www.iambirmingham.co.uk/wp-content/uploads/2018/05/Birmingham-Pride-2018-preparations-by-Denise-Maxwell-03-800x534.jpghttps://www.iambirmingham.co.uk/wp-content/uploads/2018/05/Birmingham-Pride-2018-preparations-by-Denise-Maxwell-03-300x200.jpg2018-12-16T19:10:03+00:00Joshua WilliamsBlogColumnCommunityEntertainmentHistory & HeritageInvestigativeLGBT+NewsRetailactivism,Andy Street,Birmingham City Council,Birmingham LGBT,birmingham LGBTQ,Birmingham Pride,black box,construction,demolition,Digbeth,erasure,Gay Quarter,Gay Village,Hurst Street,Joshua Williams,LGBTQ,Pride,Protest,Queer,Southside,West Midlands Mayor,west midlands metro mayorToday, the heart of Birmingham’s LGTBQ+ scene, a community spanning clubs and safe spaces for all, has made a heartfelt plea. The plea is quite simple, our community is under threat and we need all the help we can get to protect it from being destroyed. Frequent visitors to Birmingham’s...Joshua WilliamsJoshua Williams[email protected]AuthorJoshua Williams is the former Mr Birmingham 2015-2017. He is a young ambassador, politics student and mental health and LGBTQ+ rights campaigner.I Am Birmingham
« Christmas cheer in Birmingham Offices
Brummies mark International Migrants Day with stories of new friendships »