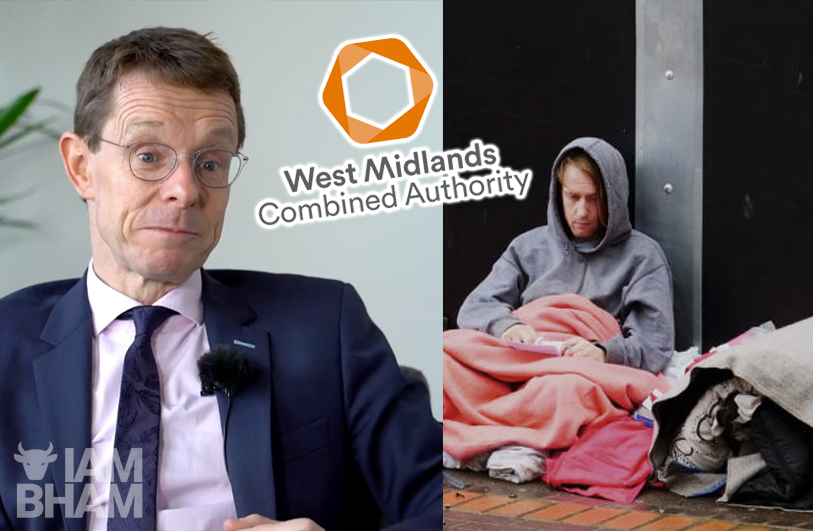 Wm Mayor Andy Street says monitoring the state of homeless hostels in the region isn't the responsibility on the WMCA (Photo: I Am Birmingham)

In an interview with I Am Birmingham, the metro mayor highlighted some key successes in support for the homeless in the region, but fell short of criticising Birmingham City Council for providing inadequate temporary accommodation.

The response follows recent anger from rough sleepers at the state of several hostels in the city, which have left many and homeless individuals wanting to stay out on the street, with a venue on Hagley Road being described as “having more rodents than staff”.

Responding to the backlash, Street squarely placed the issue at the door of local councils, saying he doesn’t want to “accidentally” fall into their responsibilities. Asked if his WMCA task force will look into the complaints, he said:

“No, is the honest answer to that. I think there’s a really important point here. There are some things that individual local authorities are responsible for and it is very important that the Combine Authority and I, as mayor  don’t accidentally fall into those responsibilities; and this is a good example of that.”

Pressed on whether his task force to should at least scrutinise the awful conditions of hostels which have been given one-star reviews on account of public health issues including rat infestations and mould on walls; he said:

“Of course, it is but actually, in terms of the responsibility of the choosing and monitoring of the individual accommodation, we have to be really clear where that responsibility lies.

“It’s a point of principle about how I try to go about this job, full stop. I don’t think it helps if there’s confusion for residents about who’s responsible, and I certainly don’t think it’s helps the officers of our local authorities if I sort of accidentally trample into their territory.

“And they do a good job about this very difficult issue, and I honestly think it  needs to be clear that it is their responsibility.”

in May 2017, Andy Street pledged to make tackling homelessness and rough sleeping a priority. One of the first actions was the creation of a Homelessness Task Force which aims to ‘design out homelessness in the West Midlands’.

According to the WMCA Task Force, “Homelessness is most acute and recognisable when there is an accommodation crisis that needs an emergency intervention. The task force aims to prevent such crises, wherever possible, through universal and targeted prevention, to intervene quickly and effectively with crisis prevention and relief, and to ensure the best pathway to recovery, enabling people to move on to a settled home.”

The individual task groups focus on people sleeping rough, children and families, young people between 16 and 25, and older singles over 25.

In May 2018, the Government announced funding to West Midlands, Greater Manchester and Liverpool City regions to support a pilot of the ‘Housing First’ project.

Housing First is an initiative to provide housing to long term rough sleepers, giving them an address and a place to call home, and importantly, a place to kickstart a new life for themselves. There was criticism over the length of time it took between the announcement and the building of the houses, but the West Midlands were the first region to have people in these new homes.

Despite some of the regions successes, Street acknowledges there is still issues that have to be to be addressed, including support for people with underlying mental health issues and addiction issues.

But emergency intervention to the accommodation crisis doesn’t appear to be high on the agenda with regards to temporary accommodation.

The temporary housing used by Birmingham City Council has also come under scrutiny over the last few months, when in October it was revealed that five bed and breakfast hotels banked £3.3 million from taxpayers, despite numerous complaints, terrible reviews and living conditions. The top earner, Norfolk Hotel on the Hagley Road, has been described by some reviewers as “The worst hotel in Birmingham” and having “Urine covered floors and walls”.

Should the West Midlands Combined Authority Homelessness Task Force support those in inadequate accommodation? Or do you think that the Task Force is doing the best they can?

Let us know in the comments, or tweet @IAmBirmingham or drop us an email at [email protected].