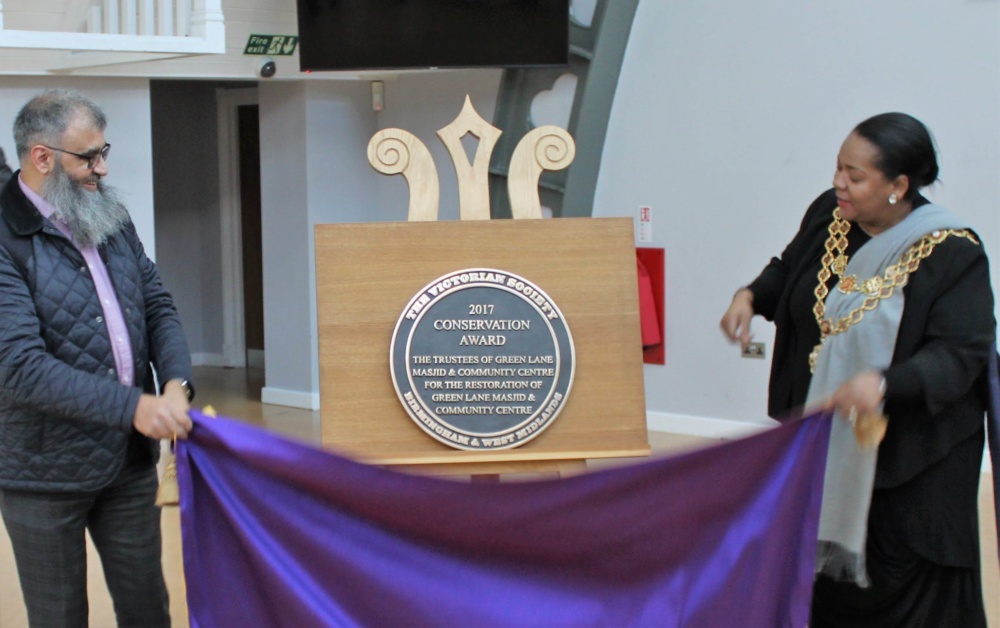 A Birmingham mosque has been presented with a special award for conservation and renovation of a Grade II listed building.

Last week, the Green Lane Masjid, a mosque and community centre was formally presented with the prestigious Victorian Society 2017 Birmingham & West Midlands Conservation Award for the renovation of their historic building in Small Heath, Birmingham.

The event was attended by Yvonne Mosquito, the Lord Mayor of Birmingham, who presented the Bronze award and a framed scroll to Mohammed Saeed, Chair of the Board of Trustees of Green Lane Masjid and Community Centre (GLMCC).

The building was originally opened as a library in 1894 and then with adjacent swimming pools in 1902. Designed by local architects Martin & Chamberlain and built in the redbrick and terracotta Gothic-Jacobean style between 1893 and 1902, it is a Grade II listed building.

With its large clock tower and distinct Victorian style, the iconic building occupies a prominent corner position on Green Lane off the main Coventry road. Renovations have been ongoing since the mosque purchased it back in 1979, with major refurbishments having taken place from 2011 to 2015.

After sinking a well to supply water to the building, capable of supplying 8300 gallons per hour, the public baths and swimming pools were opened in 1902, but then destroyed through enemy action during World War 2, on the night of 18th October 1940.

In 1979, the deteriorating and heavily vandalised building was purchased by Markazi Jamiat Ahle-Hadith UK for use as a mosque and renovated over several decades.

Stephen Hartland, Chairman of The Victorian Society in Birmingham remarked on the quality of the renovations:

“It was the clear winner from the many contenders and that whilst such conversions can be very challenging, it is acknowledged that the Green Lane building has been adapted very successfully”

“It was wonderful for our building to be recognised by the Victorian Society for this prestigious award. During recent refurbishment projects, we have been very sympathetic and conscious to retain the natural beauty and character of the building.

“Before we purchased the building in 1979 from the City council, it was heavily vandalised whilst it lay vacant for a period of two years. In recent years, we are pleased to have restored the building to its former glory whilst modernising the facilities to meet the needs of today’s users.  Although our religious services are focussed on the Muslim community, many of our other services are open to people of all faiths, all of whom we welcome.”

The Green Lane Masjid is located in Small Heath, and school visits can be arranged via their website here.