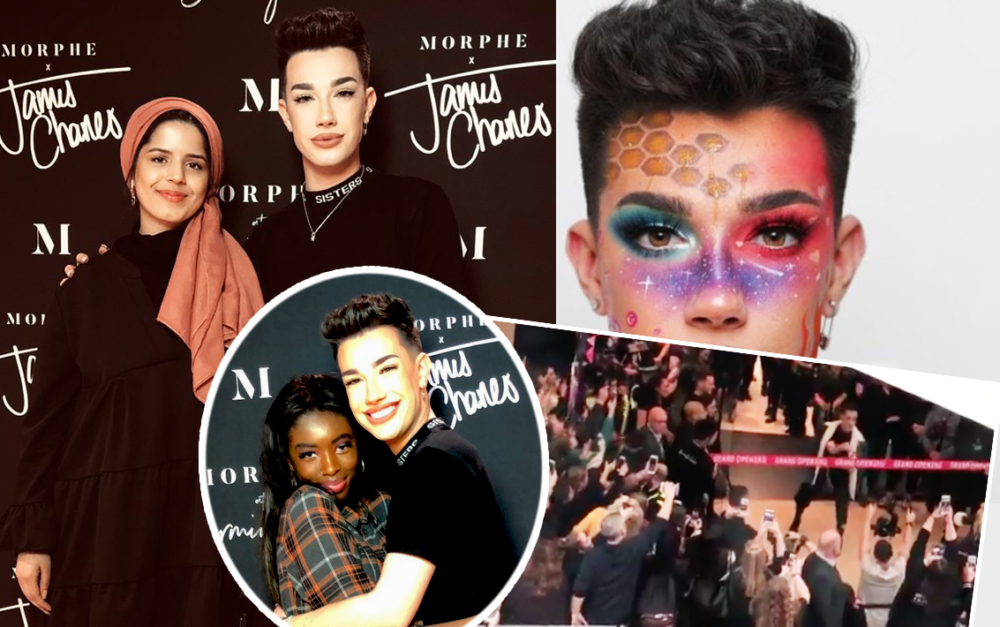 The Bullring in Birmingham was a scene of absolute mayhem and chaos this afternoon, as over 7,000 fans of international celebrity YouTuber James Charles packed the shopping centre  in the hope of catching a glimpse of the make-up artist open new store Morphe.

Over 20 police officers were reportedly called to the shopping centre to control crowds as three floors of the building were packed with screaming fans of the teenage internet  personality and young entrepreneur, who was in the city to launch the brand’s first make-up store outside London.

Amid scenes of hysteria, fans who had been waiting since 7am in the morning shared reports of people getting crushed and manhandled as the Bullring became unmanageably full with an excessive number of fans and shoppers.

Despite today being the first Saturday following a January payday for many, regular customers couldn’t get into most stores within the mall, as fans of James Charles took over the venue, resulting in what has been described in a “lockdown”.

Hundreds of those who had travelled from across the UK to see the popular make-up artist and model were left disappointed as the star – who has over 25 million online followers and subscribers – only made a brief 30 second appearance to unveil the new store on the middle floor of the Bullring, where he smiled and waved at fans.

As the beauty influencer went back inside to take a few photos with fans as part of an official meet and greet between 12pm and 2.30pm with 250 fans who had won a competition draw, many complained of not getting the chance to meet their idol and described the day as “poorly planned” and “complete pandemonium”.

Hundreds of people waiting in a crowd of over thousands made claims of being crushed by those around them, being manhandled by security and or Bullring staff not being able to manage the sheer number of people who turned out to see Charles James, who appeared for less than a minute to cut a red ribbon in front of the new Morphe store.

@jamescharles has this place on lock down today with all the police and security 🙄😳 #Birmingham #bullring #jamescharles pic.twitter.com/OklRSRjTqt

@jamescharles is about to become the most popular boy in the United Kingdom today. Birmingham is CHAOS 😱

“I’m so annoyed with the way I was treated today, I waited 4 hours to try and get a glimpse of James, only to be pushed back in the queue due to people shoving in front, and the fact that I could get a chance to meet James was a lie, the scratchcards were just a giveaway of lashes. Not happy at all.”

Attendee Mo Warkka added: “This was so poorly organised by Bullring.”

This was so poorly organised by @Bullring @jamescharles opening pic.twitter.com/lXFEjVR8LD

After seeing these i’m glad I decided against going to the bullring today to the James Charles event my anxiety levels wouldn’t of coped at all. pic.twitter.com/y8Is4KjiWi

I've been in too, it would be alright if Security didnt make you queue outside to get in on a saturday 😂

After a busy morning with 2 persons in custody before 10am, city centre officers dealing with over 7000 in @Bullring to see @jamescharles. We are now conducting a vehicle check point in the city as part of #ProjectServator. 👌

“Security and police kept making announcements which the crowd thought were about James… the hype is already built from the announcement making people push forward more.”

However, around 250 fans did get to meet James Charles and were ecstatic at the opportunity.

So I took @ravendreww to see the @MorpheBrushes opening in the Bullring… Then I WON the “ULTIMATE PRIZE BABE” with my scratch card (1st in line & free brushes, pallet & more!) Had to give it to her cos I love her 🥰 THANK YOU SISTER @jamescharles for making her day! ❤️ pic.twitter.com/Ou4LTtIbFk

So so so amazing to finally meet you @jamescharles Love you the most💙 pic.twitter.com/jjCd3G1pxU

I can't believe I met you sister. Such a genuine human❤ @jamescharles pic.twitter.com/iwPclIjZX5

it was nice to meet you sister @jamescharles #Birmingham pic.twitter.com/HgVtAcisIl

Speaking before the event, New York native James Charles – who collaborated with the brand last year to release an eyeshadow palette – said:

“I’m so beyond excited to be travelling to the UK for my first time ever! It’s going to be such an amazing time and let’s make this meet and greet the biggest we’ve ever done.”

Morphe, created by Linda and Chris Tawil, is known for their full spectrum of professional quality tools and makeup with over 300 brushes and highly coveted palettes, featuring influencer collaborations such as the best-selling Jaclyn Hill and James Charles eyeshadow palettes.

“I love the fact that more Morphe Babes in the UK now have a chance to play with our new makeup, colours, and brushes,” explained co-founder Linda Tawil.

“This is a place for you to engage with Morphe in-person. Chris and I are excited to take the conversation from Instagram to real life.”

Who is James Charles?

Charles launched his YouTube make-up channel at the end of 2015 and has since amassed over 12 million subscribers and 700 million views, an Instagram following of over 11.1 million and 2.34 million followers on Twitter.

Originally from Bethlehem, New York, the internet celebrity is openly gay and has helped pave the way for men of all ages and backgrounds to feel comfortable embracing make-up.

“Holy shit, there were 8,000 at the mall which blows my mind.  We keep breaking records every single time, and I just cannot believe this is my life and I’m surrounded by so many amazing people.”

Charles has admitted being overwhelmed by his Birmingham store appearance, and apologised for being rushed out without saying farewell properly. He said:

“Oh my God, you guys, we just headed out of Bullring and I just wanted to say thank you so much for such an incredible meet and greet today. Holy shit, there were 8,000 at the mall which blows my mind.  We keep breaking records every single time, and I just cannot believe this is my life and I’m surrounded by so many amazing people. It keeps getting bigger and bigger!

“I will literally never forget today’s meet and greet, and not only because everyone was so nice and so sweet, but everybody had on literally have craziest most beautiful make-up looks I have ever fucking seen. Like rainbows, colours, all using the palette, I was so inspired and it made me so happy, to see so many sisters loving it and I am so grateful for all you guys here, you have no idea.

“I met so many amazing artists, fans and friends that I’ve been following for so long, and I was in the best mood ever. I wanted to say good bye like I always do at the end, but unfortunately security would literally not let me. We tried everything but it was a hazard, and I had to get back in the car to head home, but I love you guys and am so grateful for all you guys coming out!”

James Charles thanks his Birmingham fans for attending store launch: