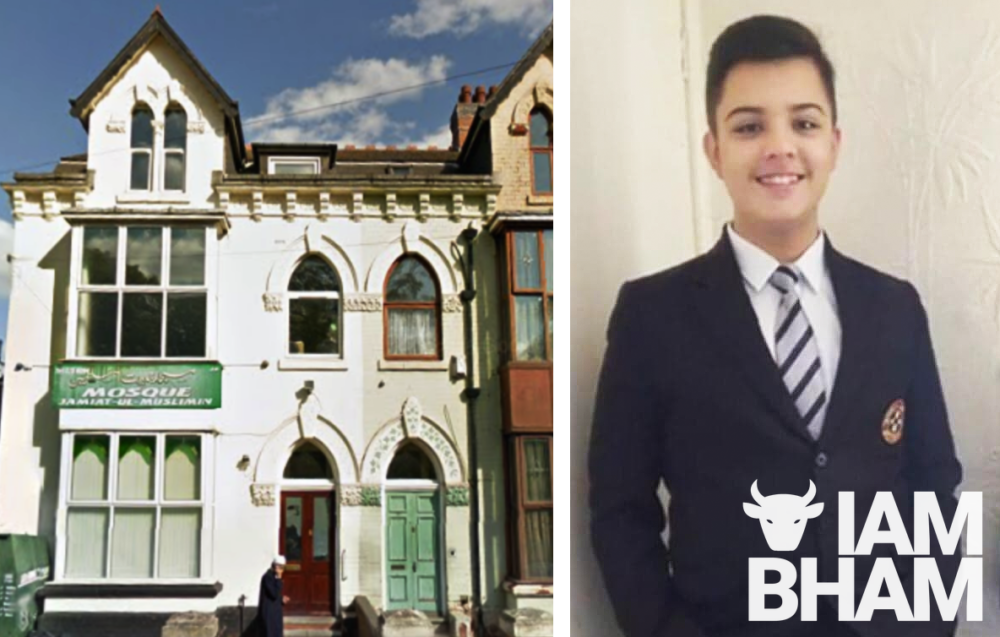 Teenager Farhan Raheem was reportedly attacked inside Tennyson Road Mosque in Birmingham, according to a statement made by the victim's family

A man wearing a balaclava violently attacked and robbed a teenager at Tennyson Road Mosque in Birmingham on Friday, according to claims made by the family of the victim.

16-year-old Farhan Raheem was robbed and left bleeding by a masked thug who forced himself into the mosque in Small Heath, according to family members.

The attack on Farhan Raheem reportedly took place at approximately 6pm on Friday 1st February inside the Jamiat-Ul-Muslimin Mosque on Tennyson Road, opposite Small Heath Park, not far from the location where Islamophobic and racist graffiti was daubed across walls and pillars last year.

Sajida Hashmi, aunt to Farhan Raheem, spoke to I Am Birmingham:

“A man wearing a balaclava came into the mosque and hit my nephew on the head with a metal bar, then snatched his phone off him.

“My nephew fell onto the floor where he was left to suffer and bleed.

“The main entrance of the mosque door opened and other men wanting to pray entered the building. This is when the attacker decided to flee, leaving my nephew bleeding on the floor!”

West Midlands Police arrived at the scene and escorted the victim to hospital, but apparently the officers were unable to gain much detail from the victim due to the shock of the incident and the injuries sustained.

Describing the state of her nephew, Hashmi said:

“He’s been traumatized and scarred.

“My nephew has never been in any sort of trouble. He’s the sweetest boy, always kind to others.

“Why is this world, this life, so cruel? There’s no such thing as humanity anymore. Why do the innocent get hurt? Why is it them who tend to suffer?”

I Am Birmingham was also informed by Sajida Hashmi that the family are doing all they can to help the police with the investigation to catch the violent criminal who committed the daring crime inside a mosque:

“Police are doing everything they can to trace the man who burst into the mosque and attacked my nephew.

“The family is still in a deep shock and we’re asking for help from the public to come forward with any information that will help catch this violent thug before someone else is attacked or killed.”

It is not known if the attack was a hate crime, and the mosque has not commented on the incident.

A record number of anti-Muslim attacks and incidents of abuse were reported between 2017-2018, according to the monitoring group Tell Mama.

In its annual report last year, the group noted a surge in Islamophobic attacks, with a rise of 26% on the year before and the highest number since it began recording incidents. Experts have put the rise down to the growth of the far right.

Police are requesting for anyone who may have seen a man running out of the Tennyson Road mosque to come forward. If any local resident has any CCTV footage from around 6pm which shows the fugitive running away from the crime scene please contact the police.

Anyone with information can contact West Midlands Police via Live Chat at west-midlands.police.uk between 8am to midnight, call 101 anytime or contact Crimestoppers anonymously on 0800 555 111.

(Visited 3,284 times, 1 visits today)
https://www.iambirmingham.co.uk/2019/02/03/masked-thug-launches-attack-teenager-inside-mosque/https://www.iambirmingham.co.uk/wp-content/uploads/2019/02/Farhan-Raheem-in-Birmingham-mosque-attack-800x510.pnghttps://www.iambirmingham.co.uk/wp-content/uploads/2019/02/Farhan-Raheem-in-Birmingham-mosque-attack-300x191.png2019-02-04T20:11:57+00:00Rangzeb HussainCommunityCrimeFaithNewsRacismAssault,Attack,B'ham,Balaclava,Birmingham,Birmingham Muslims,Brum,Brummies,CCTV,community,Crime,England,I Am Bham,I Am Birmingham,Islam,Islamophobia,Jamiat ul Muslimin,masjid,masked,Mosque,Police,Racism,robbery,Small Heath,Small Heath Park,streets,teenager,Tennyson Road,Tennyson Road mosque,Theft,Violence,violent attack,West Midlands,West Midlands Police,WMPA man wearing a balaclava violently attacked and robbed a teenager at Tennyson Road Mosque in Birmingham on Friday, according to claims made by the family of the victim. 16-year-old Farhan Raheem was robbed and left bleeding by a masked thug who forced himself into the mosque in Small Heath, according to family...Rangzeb HussainRangzeb Hussain[email protected]AuthorI Am Birmingham
« February is LGBT+ History Month: Here’s 100 years of fighting for queer rights and liberation
Birmingham mosque opens its doors to city homeless as temperatures plunge »