REVIEW: Blue/Orange – 20 years on, it still has something to say 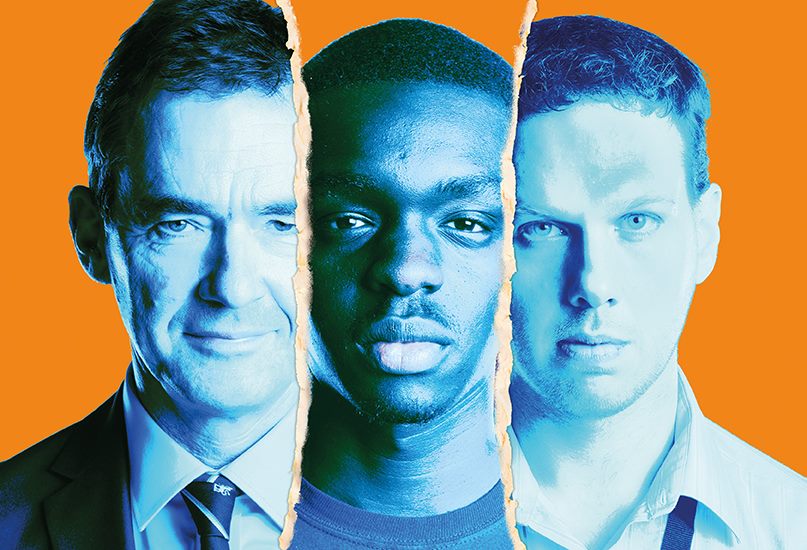 Christopher (Ivan Oyik), a young black Londoner, has reached day 28 of his detention at a psychiatric hospital and wants to go home. Problem is, he thinks oranges are blue and that Ugandan dictator Idi Amin is his father.

It’s been 20 years since Joe Penhall’s Olivier award-winning play, ‘Blue/Orange’, was written and first staged, and it remains as crucial and urgent a depiction of race, mental health, and power as ever. Joe Penhall’s drama of a young black patient caught between the clashing egos of two white doctors shows them to be led by careerism, dogma and unexamined prejudice. Their patient is but an advancement or hindrance to their own careers.

Robert and Bruce are divided in their diagnosis and fiercely defend their opposing positions. Their power struggle escalates into an exchange over racism, ideology, prejudice and egotism. With each new revelation, all three find their layers are peeled back to reveal increasingly uncomfortable truths within themselves.

The play is certainly timed well. In 2014, the Guardian reported that black men in Britain are 17 times more likely than their white counterparts to be diagnosed with a psychotic illness. Added to that, a study by Lambeth council revealed that nearly 70 percent of the London borough’s residents in secure psychiatric units were of African or Caribbean heritage – despite the fact that only 26 percent of Lambeth’s population is black.

As director Daniel Bailey points out:

Ivan Oyik is a superb actor, seamlessly moving the audience between laughter and despair. It is this ability to keep the audience’s emotions in a grey area that feeds into the play’s refusal to hand over a conventional villain who embodies the “wrong” side of the debate, providing richness and psychological complexity.

Richard Lintern’s portrayal of senior consultant Robert, a man disappointed in life, coveting that which others have, is chilling and all-too-believable. Meanwhile, Thomas Coombs does a fine job at developing the character of Bruce as the embodiment of what is patronising about the UK’s mental health system: patronising, annoying, and often wildly off the mark when assisting in Christopher’s recovery.

Blue/Orange original blurb described itself as “an incendiary tale of race, madness and a Darwinian power struggle at the heart of a dying National Health Service”. It is a fiery piece of theatre, and a welcome project to promote positive mental health among young African-Caribbean people. It is well worth a watch.