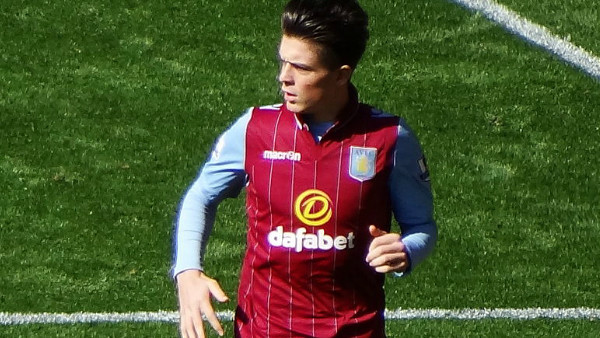 Just 9 minutes into the fiery second city derby, a fan wearing a Birmingham City jacket invaded the pitch, running behind Grealish to connect a swinging punch and knock him down.

Following the attack, Villa captain Grealish sat on the turf at St Andrews in Small Heath before being helped up by players from both teams in order to continue.

A fan has run onto the field and attacked Jack Grealish from behind. pic.twitter.com/PI1Wf3qXfP

Responding to the incident, Birmingham City released a statement:

“We deplore the behaviour of the individual who committed this act and rest assured he will be banned from St. Andrew’s for life.”

“The Club will be working with the relevant authorities to investigate all the circumstances and we will be reviewing our stadium safety procedures.”

“The club will also support any further punishment this individual may face in the eyes of the law.

“What happened has no place in football or society. Jack is a Birmingham lad and regardless of club allegiance should not have been subjected to this – there are no excuses.”

In the 67th minute Grealish went on to score a left footed shot to put Aston Villa 1-0 up and the eventual winners of the derby, but the game was marred by the incidents outside of the football.

In a similar statement, Aston Villa said a “red line has been crossed by this cowardly on-field assault” and that they were”appalled by the disgraceful attack”.

“Local rivalries are part of the fabric of the game. However, as we are sure our friends at Birmingham City would agree, to have a player’s personal safety placed under such jeopardy is a serious cause for concern for the entire football community.”

Viewers of the game are also claiming that during the celebration of the winning goal, a steward kicked Grealish in the leg adding further shame to an already sad day of football for the city.

Watch the grey haired Birmingham Steward trying to kick #Grealish back over the advertising, then lead away by Police…Stay classy #BirminghamCity pic.twitter.com/Fwbzk4Aiht

It’s not clear what action the English Football Association will take but a lot of pundits are commenting that they have never seen this kind of behaviour on a football pitch. The EFL commented:

“The EFL condemns the mindless actions of the individual who encroached on to the pitch at St Andrews on Sunday afternoon.

“It’s a situation no player should ever be faced with.

“In all circumstances the playing surface is for players, not supporters and those playing in the game must be able to do so safe in the knowledge they will not be subjected to this type of behaviour.

“Whilst this incident falls within the remit of the Football Association, we will work with all the relevant parties to address the issue of player and match officials safety on the pitch and ensure the appropriate action is taken.”

ARREST: Following the incident on the pitch involving an attack on an Aston Villa player; a man has been arrested and en route to a custody block. Further details to follow. pic.twitter.com/fed9KrHBgl

West Midlands Police said a man has been arrested following the on-pitch incident.

At the time of writing Jack Grealish hadn’t tweeted about or issued a personal statement about the incident.

UPDATE: Jack Grealish has posted a Twitter update, simple with the words: “The cream always rises… ⚽️ #AVFC” alongside a photo of himself celebrating.