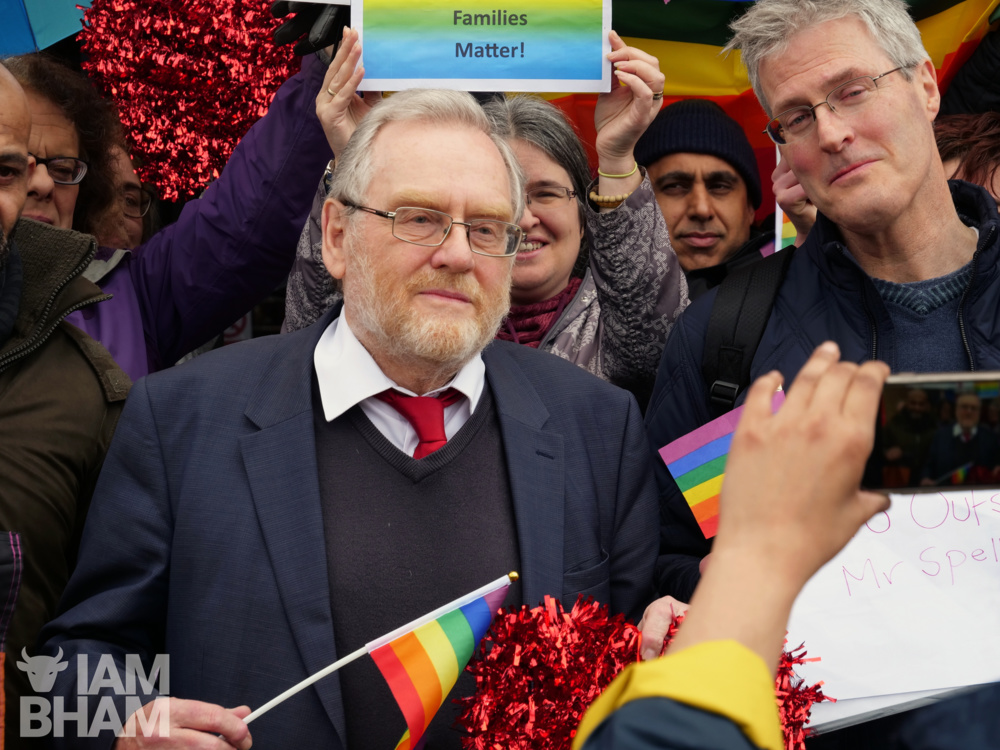 MP John Spellar has done a u-turn and apologised for a recent vote against LGBT inclusive education (Photo: Adam Yosef)

A Sandwell MP, who last month was one of only 21 Members of Parliament to vote against LGBT inclusive education, has now come out in support of diversity lessons after meeting with protesters.

The u-turn from John Spellar, MP for Warley, came following anger after he voted against plans to update the school curriculum to include teaching about LGBT families, with rival politicians branding him a “dinosaur”.

In Smethwick, protesters gathered at a constituency advice bureau held by Spellar at Smethwick Council House on Saturday, in defence of education equality and diversity in schools, including LGBT, disability, and race issues. They sought to challenge John Spellar’s voting record on LGBT rights.

Flying rainbow flags and holding up signs stating ‘Show Love, Not Hate’, ‘Why, John, Why?’ and ‘Do Your Research’; the MP allowed them into his Smethwick High Street surgery for a frank discussion for around 20 minutes, before posing for group pictures.

Spellar highlighted his record of support for equality, but protesters were dumbfounded by his recent vote against LGBT education and awareness in schools. In a heated discussion, several attendees asked Spellar to clarify his position, to which he repeatedly offered apologies for what he has since described as a “mistake”.

LGBT activists and allies meeting with Spellar called for the politician to make his position on LGBT equality clear, and to actively champion LGBT education to prevent any misunderstanding of his intentions.

Speaking to the the protesters who had gathered to see him, Spellar said he had initially chosen to vote against new inclusivity measures because of concerns from some of his constituents but, after seeing more details about the plan, admitted he should have voted in favour.

The changes, which have been led by Education Secretary Damien Hinds, are the first time in 20 years the curriculum has been updated. The legislation, which won cross-party support, was revised to ensure school children would be taught about all kinds of relationships and family models, as well as equality issues.

Mr Spellar initially told the Express & Star: “I think it was a mistake to vote against it. It was a mistake for which I apologise to the LBGT community. There were a lot of concerns from faith communities. The education minister Nick Gibb put out an explanatory letter which indicated the way they are looking at local circumstances and wanting to engage with parents and that covered it.”

He added: “We need to make sure faith communities are reassured. There was a lot of representation, it wasn’t people who were demonstrating, just constituents and parents who had concerns.”

Speaking in a video captured with the LGBT activists, John Spellar said he was “meeting with the community, supporting diversity and inclusion in our great borough of Sandwell.”

“Today we’re here to speak to John Spellar, one of the MPs who was against the teaching of inclusivity and diversity in schools, in particular LGBT topics.

“538 [MPs] actually voted for it, so it went through; but we’re here today to understand why John was one of the 21 who voted against it.

“John has apologised and he agreed that he’d made a mistake. We wanted to understand what he’s actions were going to be. Essentially, he’s just pandering to right-wing propaganda and the rise in Islamophobia by making this vote. He agreed with our concerns and we really hope he’s now going to work with us to champion equality and diversity in schools.

“I acknowledge his apology, I’m not too sure if it’s just words. Actions speak louder than words so we really will have to see what he does, but I feel all MPs, as leaders, need to work harder. They are very much part of this right-wing propaganda that is pitting two marginalised communities against each other.

“John Spellar really needs to stand up now, but it really is within his gift to do that. We can’t make him do that.”

Doug Morgan, a primary school teacher and member of the National Union of Teachers (NUT), challenged Spellar’s decision to vote against LGBT education. In the meeting, he told the elected official:

“You made a choice. If you want to be proactive around inclusion, and proactive saying there should be equality in our schools, then be proactive.

“You say that schools in our constituency are doing really well for equality, but it’s not because of you. Your vote has pushed some of this stuff backwards, so your job is to represent heads and teachers in school who are fighting for this. Your vote is not a weather vain.”

He added: “In my job as a teacher, if I get something wrong, I get held to account. It’s about time more of our MPs realised this, took this to heart and take a lead role in our community. We want you to be on the offensive.

“You voted the wrong way, your job is to put some of this right.”

“We were concerned about John voting against LGBT in education. He’s apologised and he’s backtracked so we went there and asked him why he voted that way.

“He said, in his defence, he made a mistake; but what we’re really asking him to do is show he’s gonna put this right. So he’s said he’s gonna try and be more pro-active, so we’re just gonna follow through with him.

“You can only go on what people say. It takes a lot to apologise. He’s apologised and I’ve accepted his apology. It’s brilliant he’s apologised but how is he going to make this right? You can see how upset and angry we were, so hopefully he’s gonna be pro-active and not reactive.”

The furore comes in the wake of a national conversation about LGBT inclusive education, which has this year been sparked by Birmingham parents protesting outside several schools in the city.

Hundreds of children have been withdrawn in opposition to the ‘No Outsiders’ programme, which was created in 2014 by Andrew Moffat, the assistant head teacher at Parkfield Community School. The teaching material aims to educate children about the characteristics protected by the Equality Act – such as sexual orientation and religion.

But in recent months, Birmingham has been gripped with parent protests outside Parkfield School, Anderton Park School and some neighbouring primary schools where LGBT equality is being taught. Counter protests have also been held, while parents and activists from all sides continue to engage with schools to find a resolution.