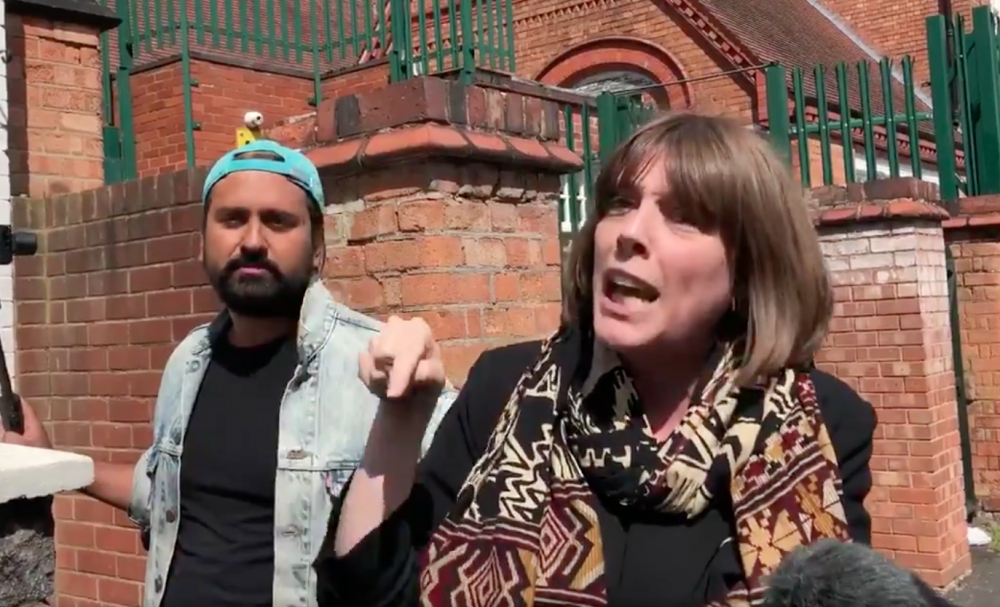 Yardley MP Jess Phillips clashed with protesters outside Anderton Park Primary School this morning, where activists opposing teaching of LGBT equality have continued to disrupt lessons at the Birmingham school.

Tensions flared and police officers arrived on the scene as the Member of Parliament locked horns with anti-LGBT campaigners, following claims of cars being attacked and hundreds of pupils being forced to stay at home.

In a video clip filmed at the scene by BBC reporter Sima Kotecha, Phillips is shown being forced into an exchange with self-proclaimed “active activist” Shakeel Afsar, who has organised almost daily demonstrations outside the school.

As Afsar – who has no children at the school – questions why Phillips hasn’t been outside the school supporting parent protests, she replies: “I don’t agree with the protests!

“I don’t agree that you get to pick and choose which equality you can and can’t have.

“Our equality laws protect us all. I want them to protect you, and actually I want to protect the Muslim community. I want our Muslim community to be completely protected, and I think what’s happening here, the worst thing about it is it’s damaging the reputation of a peaceful and loving community that I’ve lived in my entire life.”

While Afsar attempted to repeatedly speak over the MP, she announced she was “going to call for an exclusion area to protect the 700 children in this school.”

Afsar claimed there were 600 children who had not turned up at school today, to which Phillips replied: “That’s simply not true. I’ve just been in there. I’ve just been inside the school so that is completely untrue, with respect.”

“All of these things that you are saying just simply aren’t true.”

Afsar described Phillips as “aggressive”, while insisting the school was refusing to mediate with or consult parents.

The clash came a day after counter protesters from the Supporting Education of Equality and Diversity in Schools (SEEDS) group claimed eggs were thrown at them after they placed solidarity placards and banners supporting the school outside the building on Sunday night. Local residents also claimed their car was splattered in eggs by people wearing masks, which may have been the same individuals who targeted the counter-protesters.

Shakeel Afsar described the actions of SEEDS members as “provocative”, and their messages of peace as “inflammatory”.

Protests outside Anderton Park School in Sparkhill mirror similar demonstrations that have been held outside Parkfield Community School in Saltley, which have since spread to several other city schools. A similar model of protest against LGBT education has also been taken up in Manchester and Bolton, and conservative Christian and Jewish figures from London have also travelled to Birmingham to support the Parkfield protests.

While initial protests were staged to challenge the teaching of No Outsiders and teacher Andrew Moffat, who created the educational materials, schools that don’t teach the materials are now being targeted for simply promoting LGBT equality. The ongoing protests have been organised by Shakeel Afsar and Amir Ahmed, neither of whom have children at any of the schools being targeted. Both activists believe the teaching of LGBT equality is harmful to primary school children.

A number of parents who have joined protests have claimed they’re not homophobic, but Birmingham City Council leaders and education chiefs have roundly condemned the anti-LGBT protests and the disruption they continue to cause.

Afsar has also claimed that 300 people have signed a petition demanding the resignation of Anderton Park School headteacher Sarah Hewitt-Clarkson, demanding an end to equality teaching. Hewitt-Clarkson has criticised protesters, reiterating her commitment to LGBT equality in education.

She said: “It’s a whole day out of a child’s life, and the children will be possibly thinking ‘Oh great, it’s a day off school’ but that’s not true. They’re being forced to stay at home. Children completely get equality and it’s a handful of parents who don’t.

“We are very sensitive, we’ve got a very mixed community here, a lot of children are Muslim; and for a lot of Muslim parents, it’s not okay for two men to get married, but it is in British schools. So, we’re very sensitive to that, we don’t say you must change your belief, we never have, because religious beliefs are important to people.

“So we say yes, two men or two women can get married in this country, that’s the law, that’s a good thing. It means they’re equal to a male and female couple. And at the same time, your parents might not think that’s okay and they can talk to you about that at home and we respect religious belief. We’re very sensitive to that, we always have been and always will be.”