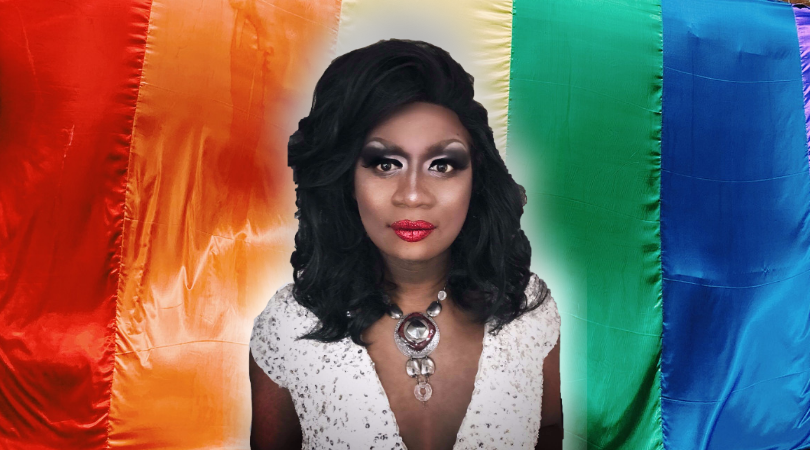 Yshee Black is Birmingham’s self-proclaimed star on the rise, star of stage and screen and internationally ignored Drag Queen. The Kiki Queens winner has played an integral role in the shaping of the city’s LGBTQ+ scene.

We caught up with the woman herself to find out about her journey, her successes and, of course, her Birmingham Pride plans.

What inspired you to create Yshee Black and who is she?

I believe Yshee is an extension of myself and, in a way, was tapped into by watching RuPaul’s Drag Race season 4. Whatever its faults, it showed me the humanity and artistry behind the ‘drag’ which was always at a disconnect for me when I saw other established drag queens on the Birmingham scene; I now call them my sisters.

Yshee is your caring, loving yet mischievous Aunty and comedy is in the forefront of everything I do. I’ve always loved juxtapositions as a training actor and director taking inspiration from plays such as The Birthday Party by Harold Pinter or over the top characters in boring plain settings such as Beverly from Abigail’s Party by Mike Leigh. Yshee Black being our average black church lady in a nightclub setting is exactly what I’ve always loved. Yshee is dressed for a church wedding, amongst all those sequin covered glamazons, and that has its own magnetic pull that I love.

As Birmingham’s only black Drag Queen with a regular residency, what challenges have you faced in your career as a POC drag performer?

POC drag performers are always going to be far and few in-between if you’re not based in London which is a shame and needs to be addressed. Starting out was very hard for me as I didn’t know anything about makeup at all – let alone what works with my skin colour and what doesn’t work. I’m not ashamed to say that my first year with my residency, my drag mother Jenna Davinci – a white queen – painted my face as she knew far more than me and her help was invaluable.

Many non-POC queens will say, “Just go on YouTube”, and I remember going on YouTube and finding nothing I could resonate with. I looked into Drag Race girls who put up video tutorials but at the time there was only Latrice Royale. I had to wait for later seasons for other POC queens who I could resonate with to watch tutorials. I mainly found it’s trial and error and always try to ask for help if given the choice.

Being a POC performer always has that sense of tokenism where you have to represent your race or be the black face in the line-up. Sometimes that can be very degrading and annoying because non-POC queens never have to represent their race – their individuality is the first thing taken into consideration. On the flip side to that, there is such a lack of representation in areas outside of London, having a POC queen on a line-up – when approached correctly – can also inspire young queer people of colour to see a place for them on that stage. It’s a tough topic but I try and step forward with my best foot and hopefully do myself proud and inspire someone in the audience.

What inspired you to create the lip-sync competition Church of Yshee?

Well, the full story is that I turned up to a gig at the Village Inn with my drag mother Jenna Davinci to perform our double act CHOCOLATE MILK! That was the first time I’d put on a church outfit as it’s all I could get my hands on at the time. After this performance, and being a finalist in Lip-Sync 1000 in London, management suggested that I take over a Sunday night with a church them.

One of my proudest achievements was the fact that I was offered a residency with no make-up skills. I didn’t know about drag attire or what does or doesn’t look good on dark skin. However, I didn’t that consume me. I said yes and jumped into the deep end. Sometimes you just need to take risks and hope they pay off and I’m so glad that this one did.

What role do these competitions have on the evolution of Birmingham’s LGBTQ+ scene?

The young Birmingham drag scene, a year or so before the competition, saw a variety of queens turning up in looks to the Nightingale Club leading to the rise of the 4 Housewives of Birmingham (Lacey Lou, Queeny, China and Anna Lies). They were door whores, yet a constant drag presence, that reflected the growing drag race popularity. This led to more drag artists coming out of the woodwork which was fabulous!

When the competition was given the green light, it became another space for artists to perform and try out new acts in front of a new audience. Prior to this, the only real space to perform was a monthly night called Second Self.  The Church of Yshee has seen a total of 50-70 artists enter the competition making performers more confident and enabling more queens to gain regular work as dancers in the Nightingale Club.

The drag LGBTQ+ scene is so welcoming and friendly. Like any family we bicker and fight but we’re a solid community and will defend what we have till the very end. The church, I believe, has given people a chance to perform and create however I want to go further. I want to create events and spaces that aren’t so competitive with the aim of paying local artists.

What is the purpose of Fantabulosa?

I’m so blessed to be a member of Fantabulosa. The main purpose of the event is to so show kids and adults that you can be whoever you want to be; you’re valid, loved and that it’s okay to just have fun. We as a society put a lot of pressure on children and what they should see or shouldn’t. In reality, anything that is colourful, fun and contains songs they will enjoy.

I’m so proud that this has started in Birmingham thanks to director Adam Carver who also runs the LGBTQ+ festival Shout in the heart of the city. Adam and I have known each other for years and I reached out to him a few years ago after seeing the disconnect in the city with the LGBTQ+ scene, the non-LGBTQ+ theatre/creative performers and organisations within the city – and even with Shout itself.

I usually say, “LGBTQ+ representation ends where Hurst street ends and the Birmingham Hippodrome starts”. I had an intention to try and widen up that circle to include the performers I work with in the clubs on a daily basis. I’m glad that due to talking to Adam connections were made and it was the start of something great. Further down the line, Fantabulosa includes great representation of young artists and minds to pull off a great show.

.
What is your favourite Birmingham Pride memory?

I have so many favourite Birmingham Pride memories, but I think my favourite memory is when my best friend, and scene legend Dan Brown, was able to have his event TRASHY in the former Route 2 (now Medusa). Myself and my best friends decorated the entire club days before Pride and we had such fun then and throughout the entirety of Pride. Being surrounded with the ones you love under a roof created with love and support – there isn’t much else I could have asked for!

I am most excited to see NAO on the Sunday! I’ve only really just got into her music over the last month or two but she’s an amazing talent – the Solange Knowles of the UK in my eyes. I’m also excited to see Years & Years as I brought tickets to their show this year and didn’t get to go so this will be a real treat!

Pride is a great time to reconnect with old friends and make new friends whilst embodying everything queer about ourselves. It’s a time where we can recognise the spectrum [within the community] and break down internal divisions. At the end of the day, if a heterosexual decides to kill a homosexual, they won’t be after the femme’s or the masc’s, the POC’s or the Drag Queens, they’ll be after you because they just see you as homosexual – and that will be enough motivation.

If we don’t come together every day of the year – not just over Pride – then we can’t progress. This year has already been shaken up with Manchester Pride changing their flag – followed by Birmingham Pride. It brought out a lot people who scream that the flag is already inclusive and I would LOVE to live in their world where the flag does represent everyone, with everybody was treated with the same values. In the real world, that just isn’t the truth.

With that said, we need to remember that Pride is always a protest and we need to stand together and love one another so future generations don’t repeat our mistakes.

If you want to find out more about Yshee Black, you can find her on Instagram.