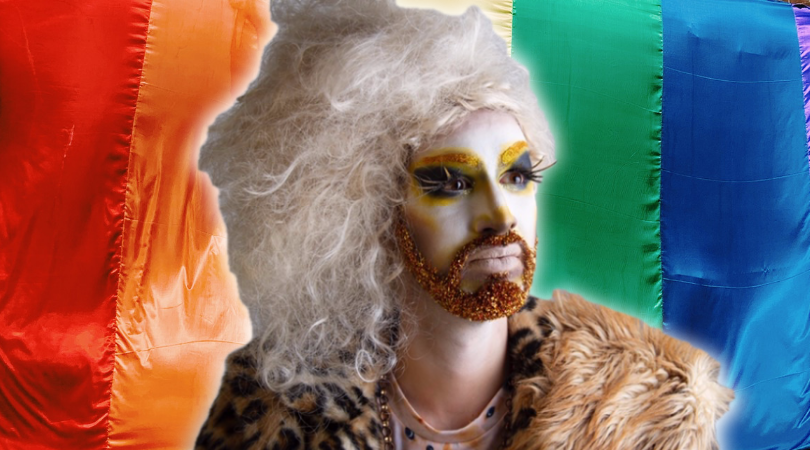 Activist and Drag Queen, Paul Aleksander is the co-founder of Birmingham’s infamous Dragpunk collective. The brand has amassed a cult following across social media hosting regular sell-out shows and events.

We caught up with Paul to find out about his inspirations, the evolution of the Dragpunk collective and his plans for this years Birmingham Pride festival.

What is the inspiration behind your drag?

I am a drag artist who, for years now, has really enjoyed performing, organising events and, most fun of all, creating looks – particularly ones that are clown-like, slightly gothic, and generally messing around with ideas of gender. My motivation was initially to have an artistic and creative outlet. I then realised the potential for drag to be the megaphone to talk about a range of subjects and issues. Gender, sexuality, art, weirdness, politics, and so forth.

So, I see myself on a drag journey that lets me express my passions, dark humour, love of quirkiness and horror, and sense of moral outrage at the curious state of the world that increasingly I find hard to avoid!

How did Dragpunk come to be?

Dragpunk is a collective established by a few people who wanted to work together as friends to create legitimate forward-thinking LGBTQ+ spaces whilst encouraging drag that is different. It was created be different to the main stream of both society and the LGBTQ+ world which, believe it or not, can be very conservative and dominated by a lot of heteronormative ideals and values. It’s a pretty white cis-male landscape out there which is only a problem in that it overshadows much of our community’s opportunities, economies and values.

With Amber Cadaverous, Lilith and Tacky Alex, we have managed to achieve some great things by working hard, constantly learning and the support of so many people. We have performed individually and collectively in most major UK towns and cities, in our own shows and as support for a range of RuPaul’s Drag Race and Dragula artists. A highlight for us was being the official support act to Adore Delano on her entire UK Tour a year ago. That really opened our eyes to the amount of young people out there who love drag, love difference, and aren’t mere millennials or snowflakes, but are really excited and passionate queer-minded souls who are so much tougher than anyone realises. That really empowered us to continue and not be afraid to actually have a voice and stand for something.

We currently run our own club night I’m Not Okay, dedicated to emo, goth and rock. We also produce theatre style drag shows, such as our drag murder mystery event Killer Queens, and day-life events such as our new Queer Life Drawing. For us, local drag can have a real quality, be entirely fresh, exciting, and really cater as extremely fun and liberating safe spaces where actual bigotry is challenged.

What are your biggest inspirations in your work?

My inspiration for most of what I do is as a result of years of being fascinated with the creative worlds of video-games, horror films and music from all genres – classical to electronic to 90s rap, and all the pop that exists in between. I adore history too, and that has shaped so much of my mindset. I came into drag after working a lot, travelling a lot, and I feel such life experiences have given me the tools to apply a lot of thought to drag and see the potential it has to build confidence, self-esteem, and find tribes of like-minded people. I like to channel my view of the world in ways that no matter how odd are relatable and stretch people’s boundaries.

What is your opinion on the LGBT centre unveiling their new inclusive Pride flag?

I was initially surprised as it’s a flag I love, and didn’t expect to see it being adopted far from its home in the USA. I love that it is though! It’s really positive that the interest and boldness is there, knowing that there will be a backlash. We’ve seen a lot of conservatism within the LGBTQ+ world as the awkward questions of are we all actually equal within this community are raised again and again. Sadly, where you fall on the LGBTQ+ lettering dictates your equality and opportunities quite heavily.

I first came across the flag at the start of the year via a well-known American commentator Jake Van Gogh who linked me to the designer, Daniel Quaser and the Progress Initiative behind the flag’s design. For me, it is just another flag, one of many, many LGBTQ+ flags that exist, and isn’t there to replace the universally loved rainbow flag. Rather, as the designer states, we live in times where queer people of colour and trans individuals are facing extremely tough times both inside and outside of the community. Both the casual transphobia and racism in our gay bars, on our streets, as much as shocking physical abuse and suicides rates, are well documented and the victims – our queer people of colour and trans siblings – are telling us this. We must listen.

It should shock us into building a stronger community and protect the most vulnerable in our LGBTQ+ world, raising us all up to a wonderful equal level. This flag strikes me simply encouraging us along this path. It looks lovely, which does matter for a visual entity, and has a very well-considered meaning. I commend Birmingham LGBT Centre for this move, as it only adds to their outreach and work (of which they do a LOT for the city’s LGBTQ+ population), and doesn’t take away anything. A temporary flag to address the issues of the day.

What impact do you think this will have for queer individuals in Birmingham?

I hope it sends a signal out to the smaller minorities of the LGBTQ+ spectrum that they are valid, there is a safe space, and they can access it. Hopefully the flag will be like a lighthouse in the dark for lost ships. There are people in our city living in fear of families, of being themselves, who online see such anger and arguments, who offline struggle with the pressures of culture, religion, gender, abilities and disabilities, and so forth. Any suggestions from any LGBTQ+ organisations from charities to nightlife venues that they are safe spaces and protection and help for these individuals, well, it matters massively.

Secondly it is symbolic to me that there are people at the helm of such organisations who value understanding what is actually going on, and are forward-thinking in how they’re going to move forward into the future. We need our LGBTQ+ events and scenes to thrive culturally, morally and economically by attracting more and more people from across the spectrum into their spheres with sincere gestures and actions. Small changes such as the flag are big nods towards this direction.

What is your favourite Birmingham Pride memory?

Pride is a very busy weekend and if I can remember anything at the end, I feel I’ve done well! Last year as a whole, I was quite proud of Birmingham Pride. Daniel Brown, one of many working day and night behind the scenes, was key in booking so many LGBTQ+ and queer-minded artists to try and balance a massive commercial Pride with having more legitimacy and money being funnelled back into the community’s artists and musicians. It was great seeing how that played out.

My favourite singular moment though was when, during a random little bit of heavy rain last year, I just went out from the main stage’s protective covering and danced in the street with two people who had the whole space to themselves, pints of beer in hand, as everyone hid from the weather. It was so liberating. Also, I remember going on a fairground ride in full drag and nearly dying. Worth it though.

I’m really looking forward to the parade. Last year we entered a small Dragpunk walking group because we wanted to walk in our city’s parade by ourselves, independently, showing off the potential of individual expression and art. We’re doing the same again this year, with around 20 of us, all wonderful drag artists of varying levels of experience, background and styles, who will march together. Drag is punk, and is currently a massive outlet for LGBTQ+ individuals to feel different, be different, and we want to celebrate that and give people the chance to be in the parade.

This year I also cannot wait for our own shows too! On Saturday we have a full hour Dragpunk show on the Lip-Sync Stage at 5:30pm. It builds on our approach to drag shows being more than just a series of related or unrelated performances, but having a story, narration, more production, reasoning, and creativity behind them. I can’t wait to see how that pans out! And shameless plug number two, on Sunday from 1-3pm on the Future Stage we have our I’m Not Okay set. It’s all about the music and letting loose but there will be performances, a lot of emo, goth and rock music, and hopefully it’ll have a super party vibe. The perfect way to shake off the Saturday night hangover!

It’s a tough one. I’ve never had an answer. Pride with a capital P is a chance to work with others and lend support to the great buoyancy of LGBTQ+ rights and survival that we all need. It’s about the collect protection of individuals that need it. There are big commercial Prides some of which work hard, some of which have become disconnected from their communities, and then there are the many, many smaller Prides. Underfunded, full of extremely hard-working people braving everything, there are on the front line of bigotry in many of these smaller towns.

So, Pride is a continual change to tackle something, or at least add to the noise, resistance, for something greater. Pride is a lower-case p, well, it’s the ability to get on and do little things that at the end of the day make you think, ‘hey, that was pretty cool’.

(Visited 334 times, 3 visits today)
https://www.iambirmingham.co.uk/2019/05/24/brilliant-brummies-pride-special-meet-paul-aleksander-birminghams-queen-night/https://www.iambirmingham.co.uk/wp-content/uploads/2019/05/Untitled-design-3-800x444.pnghttps://www.iambirmingham.co.uk/wp-content/uploads/2019/05/Untitled-design-3-300x167.png2019-05-24T19:04:01+00:00Joshua WilliamsBrilliant BrummiesBrumFeedLGBT+News#BrilliantBrum,#BrilliantBrummies,activism,Birmingham,Birmingham Pride,Birmingham Pride 2019,Brilliant Brummies,Creative,drag punk,drag punk collective,drag queen,drag queens,gore,gothic,Horror,I Am Birmingham,i Am Brum,IAB,Interview,LGBT,LGBTQ,lip-sync,Paul Aleksandr,Pride,Pride 2019,pride special,pride uk,punk,specialActivist and Drag Queen, Paul Aleksander is the co-founder of Birmingham's infamous Dragpunk collective. The brand has amassed a cult following across social media hosting regular sell-out shows and events. We caught up with Paul to find out about his inspirations, the evolution of the Dragpunk collective and his plans for this...Joshua WilliamsJoshua Williams[email protected]AuthorJoshua Williams is the former Mr Birmingham 2015-2017. He is a young ambassador, politics student and mental health and LGBTQ+ rights campaigner.I Am Birmingham
« 30+ loud and proud photos of Brummies preparing for Birmingham Pride 2019
Over 80,000 set to back ‘No Outsiders’ at Birmingham Pride tomorrow! »