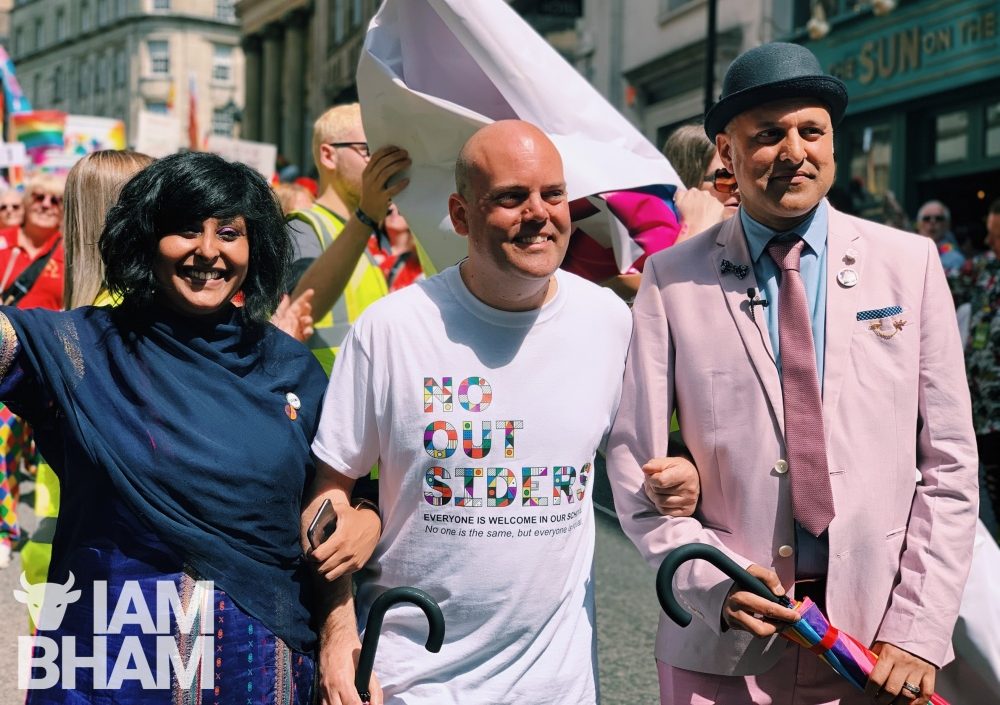 Andrew Moffat, alongside Saima Razzaq and Khakan Qureshi, at the front of this years Pride parade (Photo: Joshua Williams)

Now entering its 23rd  year, it is of no surprise that, year on year, Birmingham Pride has continued to grow and expand – and this year is no different. This years two-day LGBTQ+ festival made history with Muslim community groups leading the parade, alongside No Outsiders teacher Andrew Moffat MBE, for the first time in the events history.

The two-day LGBTQ+ festival, the UK’s largest, saw tens of thousands of revellers flank to Victoria Square for the launch of the annual Pride parade that saw visitors – and Brummies’ alike – line the streets to witness the rainbow concession.

Consisting of over 100 organisations, ranging from trade unions to LGBTQ+ businesses, community groups to large corporations such as HSBC, the parade demonstrated, once again, an undeniable desire to ‘Love out Loud’.

Fittingly, ‘No Outsiders’ teacher Andrew Moffat was asked to lead the parade to its Hurst Street destination with Birmingham Pride Director Lawrence Barton stating that he, “can think of no better or more inspiring person than Andrew Moffat to lead our parade”.

After reading an emotional speech from a 10 year old fan, Moffat received the loudest applause of the morning stating, “Children, you know that we are different and we can get along”.

As the Parade set of on course for Birmingham’s iconic LGBTQ+ quarter, Andrew Moffat was joined by community Muslim groups IMAAN LGBTQI, SEEDS and the Naz and Matt foundation in a display of solidarity. The moment has made history with Muslim groups leading the Birmingham Pride parade for the first time in the events 23 years history. Alongside Moffat stood Khakan Qureshi, found of Birmingham Asian LGBT, Saima Razzaq of SEEDS, activist Ferhan Khan and Birmingham Pride director Lawrence Barton.

With the parade officially entering the main festival site, Pride celebrations have officially begun.  Birmingham’s gay quarter, located within the Southside district, has been transformed into a vibrant festival site full of entertainment, food stalls and refreshments and, of course, nightlife.

Visitors to the festival site are set to be able to enjoy the largest ever Main Stagethis year sponsored by Virgin Trains. With headliners such as Human League and Years & Years, amongst many others, gracing the stage, attendees are truly spoilt for choice this year.

For those that want to explore the site, there is, again, more choice – and more entertainment, than ever before! The festival site also includes the Mixmag Dance Arena, The Los Angeles Cabaret Stage, Women’s Arena, The Spindle Future Stage and the brand-new lip-sync stage. If this wasn’t enough, the iconic street party is already in full swing along Hurst Street and Birmingham’s LGBT Centre are already kicking off their weekend of free events.

It’s hard to believe that the first ever Birmingham Pride, held in 1997, with one stage would grow into the legendary, nationally praised festival that it is today.

In fitting with the ‘Love out Loud’ theme, various different intersections of the LGBTQ+ community have come together to march in solidarity, during the parade, in being who they truly are – regardless of race, religion, gender and sexuality. Groups such as UnMuted, who raise the voices of LGBTQ+ people of colour in Brum, and the University of Birmingham LGBTQ+ society, have marched alongside members of the police force, trade unions and local businesses all committed to displaying a message of love and solidarity for all.

(Visited 2,330 times, 1 visits today)
https://www.iambirmingham.co.uk/2019/05/25/moffat-muslims-mardi-gras-thousands-turn-record-breaking-birmingham-pride/https://www.iambirmingham.co.uk/wp-content/uploads/2019/05/7F1D6627-5220-4F52-9054-6ED834D3D696-e1558792178190-800x564.jpghttps://www.iambirmingham.co.uk/wp-content/uploads/2019/05/7F1D6627-5220-4F52-9054-6ED834D3D696-e1558792178190-300x212.jpg2019-05-25T14:50:02+00:00Joshua WilliamsCommunityEntertainmentEventsLGBT+NewsUncategorizedWhat's OnNow entering its 23rd  year, it is of no surprise that, year on year, Birmingham Pride has continued to grow and expand - and this year is no different. This years two-day LGBTQ+ festival made history with Muslim community groups leading the parade, alongside No Outsiders teacher Andrew Moffat MBE, for...Joshua WilliamsJoshua Williams[email protected]AuthorJoshua Williams is the former Mr Birmingham 2015-2017. He is a young ambassador, politics student and mental health and LGBTQ+ rights campaigner.I Am Birmingham
« IN PICTURES: Parents continue protests against LGBT+ equality education at Anderton Park School
15 incredible moments from the Birmingham Pride parade 2019! »