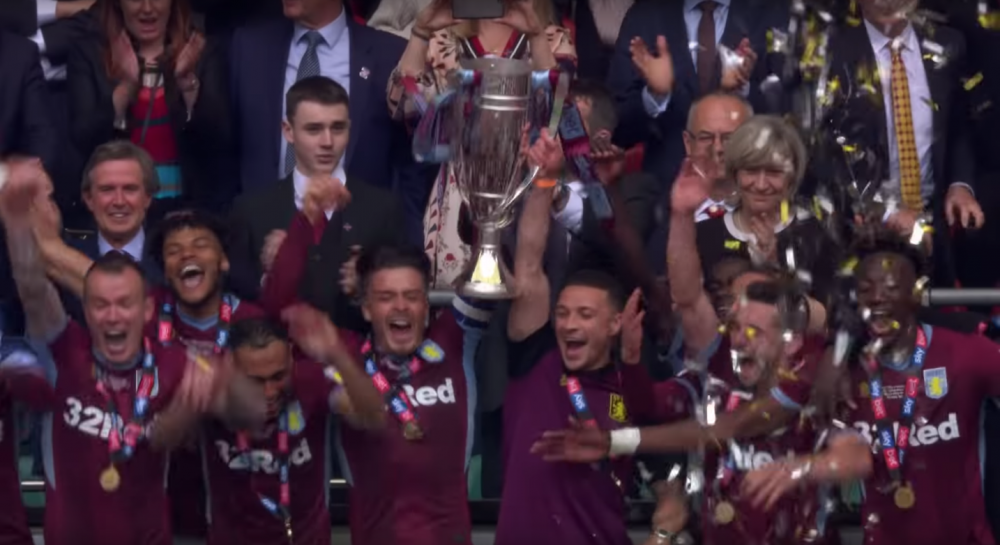 After 3 seasons in the EFL Championship, Aston Villa return to the Premier League (Image: Sky Sports)

After 3 seasons in the English Football League Championship Aston Villa Football Club have been promoted back to the Premier League.

Much like spoilers for Game Of Thrones, Facebook timelines around Birmingham and the West Midlands have been splashed by the news that Aston Villa Football Club are returning to the the top tier of  English football, The Premier League.

After a 10 game unbeaten run starting in March, The Villians shot up from 14th position to 5th position, making it to the Championship playoffs, in which the teams that finish 3rd to 6th compete for one more spot in the Premier League and an estimated £170 million in bonuses and revenue.

Having bested West Midland rivals West Bromwich Albion over 2 matches, Villa followed up with a 2-1 win over Derby County in the final. It’s clear to see that the cash bonus and the promise of playing football at the highest level in English football is of huge importance to a team that almost faced administration over financial difficulties at the start of this season, but what does it really mean to the fans, the club and the region?

Fans of Aston Villa will tell you about how important the boys in claret and blue are to football in the UK, but where does this come from? Is it all just bluster from fans trying to get one over on their rivals?

Well, here’s a few stats that might make you think twice before slating the side from B6:

All of the statistics make for enjoyable reading for any Villa fan, but what does it really mean? For team captain Jack Grealish, Monday’s bank holiday game was a dream come true.

Speaking to Aston Villa TV after the game Jack said: “It’s the best day of my life, captaining this club back to where it belongs, honestly it’s a dream come true.”

Born and raised in Birmingham, a lifelong Villa fan, he joined his boyhood club at the age of 6, rising through the ranks to eventually become captain and taking his club back to the Premier League.

Never far from controversy, Grealish was the Championships most fouled player of the 18/19 season, leading to claims that he was a ‘serial diver’.

Having been injured for 4 months of the season, on his return to full time football, Aston Villa started their unbeaten run. Weeks later, he was centre of attention once again when a Birmingham City fan ran onto the pitch and punched him in the head, in a game where Grealish went on to score the winning goal.

Head Coach Dean Smith also bleeds claret and blue, another lifelong Villa fan, members of his family worked as stewards at Villa Park. Victory at Wembley and the return to the top flight holds a different kind of meaning for Smith, who revealed that his Dad is in a care home, living with Dementia.

In an interview with Sky Sports following the match, he talked about seeing his dad before the game:

“I went to see my old man on Friday, and I managed to get his eyes open for two minutes, and I told him, I said the next time I come and see you I’ll be a Premier League manager and he smiled and nodded, and for me, that’s enough.”

But it’s not just the team and the manager that it means a lot to. Fans have taken to Twitter to describe the feelings of returning to the Premier League, including a Royal seal of approval from Prince William, one of Aston Villa’s more famous fans.

Congratulations Aston Villa on achieving promotion back to the Premier League! #UTV https://t.co/SO8p5ZIITu

It’s been a long journey and now the start of a new one #UTV #AVFC pic.twitter.com/5WFU1pBOcI

LMAOOO remember when everyone said we’d do a Leeds and be relegated to league 1. From the brink of going into administration to the premier league. We really have rose from the ashes #AVFC

SAY WE ARE @PREMIERLEAGUE, WE ARE PREMIER LEAGUE 🎶#AVFCpic.twitter.com/8W94cV408N

Whichever of our clubs you follow, Brummies can celebrate having one of the founding football league members, back in the top flight representing the city. How long will they last? Only time will tell, but for now, a huge congratulations to our Premier League team Aston Villa Football Club.