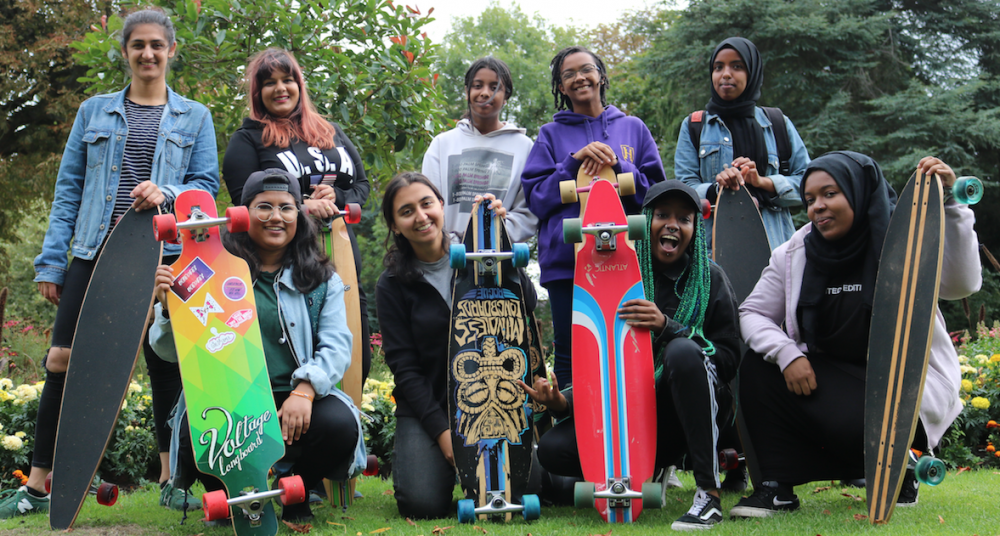 Boarders Without Borders is an initiative setup by Birmingham based GirlDreamer (Photo: GirlDreamer)

An award-winning organisation based in Birmingham are looking for public support to get more women of colour into adventure sports by 2020.

GirlDreamer is a Birmingham based company that provides a platform for young women of colour through digital skills, leadership programmes and adventure.

Set up by two friends, Kiran and Amna, they have been working together to provide more opportunities and better representation for young women of colour in the city since 2016.

One of their most popular projects is Boarders Without Borders – an initiative setup after Amna struggled to find her place long-boarding in Birmingham.

Speaking in the award winning documentary about the project, Amna says:

“To be honest, when I watch longboarding videos in general it’s predominately white males and when it is female it’s always white as well. It isn’t a problem, it’s amazing. I’d just personally love to see more BAME (Black, Asian and Minority Ethnic) girls in the sport.”

Lack of representation for women of colour

After a successful first and second cohort of Boarders, GirlDreamer have set their sights on scaling the project, so they can reach more women and create more awareness of the importance of representation in general as well as provide more opportunities for women of colour by 2020.

“This is a movement to understand why impactful work needs to scale in order for it to cause cultural shifts in our society.”

Unfortunately the statistics say the same; according to Sport England only 31.4% of women in the U.K are active participants in sport and this drops to 12.5% for Asian women. Representation is a big issue in the numbers as well.

A study commissioned by Outdoor Retailers REI showed that only 32% of women could name a female role model in outdoors sport.

Boarders Without Borders 3.0 will scale the project to three adventure sports: Snowboarding, Surfing and Longboarding aiming to get 220 women of colour into the sports by 2020.

Alongside these sports, GirlDreamer are looking to tackle another issue with representation at the same time.

Following the success of the short film they commissioned, Boarders Without Borders, GirlDreamer also want to create more opportunities for women of colour within the film industry.

According to the British Film Institute, only 3% of the UK film industry’s production and post-production workforce are from a BAME background. To fix this, Boarders Without Borders 3.0 is providing training opportunities for young women of colour to make and produce films, with one of the women directing the feature length film that will be produced about this leg of the project.

Both the festival judges & festival audience chose our doc as best short film for the FIRST time in @shextreme_ history! We are now the official winners for Shextreme Best Short Film 2018 Award & Shextreme Audience Choice 2018 Award!

Both Kiran and Amna have sporting backgrounds.

Kiran is a brown belt in jiu jitsu and a keen archery enthusiast. Speaking about her journey in sport, she says:

“My confidence just dropped, even as a person, as a woman I was taller than everyone and I was bigger than everyone, and all these things made me more conscious, not more proud, to look I fit in with this sport.”

Throughout Amna’s sporting journey, she faced barriers of culture and tradition.

“I remember at that point my dad saying my daughter’s not running around half-naked in shorts with men,” Amna recalls.

“It really affected me, because I felt like I couldn’t pursue sports on a personal level, let alone a professional level, because all these barriers traditionally and culturally were being put in front of me.”

To raise the money to take their project to the next level, GirlDreamer have opted for a public crowdfunding campaign.

At the time of writing they’ve currently hit 62% of their £30,000 goal, with only 10 days left. It’s clear that representation across sports and the media is lacking for women of colour and GirlDreamer certainly have a plan to make that happen.

All they need now is your support, to hep change the culture for more young women.

Longboarding, as the name suggests, is the art or skill or riding a longboard for fun, sport, exercise or as a mode of transport – or all of the above.

A longboard varies in shape and size unlike its set counterpart, the skateboard, and has more stability, traction and durability due to larger wheel size and lower wheel durometers. Many, but not all longboards, use trucks (axles) that contain different geometric parameters than a skateboard as well.

These factors and their variation have given way to a variety of disciplines, functions and purposes for a longboard. Longboarding also has competitive races down hill where some riders reach speeds exceeding 60 miles per hour. The angles at which some longboards can turn, as well as their ability to coast long distances make them more suitable for cruising and commuting on streets than regular skateboards.

The life of longboarding started in the 1950s, originating from surfers in Hawaii. When surfing on actual waves wasn’t possible, surfers figured out a way of achieving their goal of bringing surfing to land by customising their skateboards. Originally custom designed using plywood into a shape that would mirror water surfing, longboards soon became a bonfide genuine piece of sporting equipment, which eventually became mainstream and mass produced in the 1990s.

WATCH the Boarders Without Borders documentary…

Find out more about the group’s crowdfunding campaign and pledge your support here.

(Visited 976 times, 2 visits today)
https://www.iambirmingham.co.uk/2019/06/14/all-female-longboarding-group-want-more-women-of-colour-in-birmingham-adventure-sports/https://www.iambirmingham.co.uk/wp-content/uploads/2019/06/GirlDreamer-Boarders-Without-Borders-800x429.pnghttps://www.iambirmingham.co.uk/wp-content/uploads/2019/06/GirlDreamer-Boarders-Without-Borders-300x161.png2019-06-14T15:19:57+00:00Paul StringerActionBrumFeedCharityCommunityGeekfestImmigrationNewsSocialSportsStreet LifeWomxnYoung peopleadventure sports,All Female,Asian,B'ham,BAME,Birmingham,Black,BMW,Boarders Without Borders,Brown,Brum,Campaign,Documentary,Female Longboarders,Fundraising,GilrDramer,I Am Bham,I Am Birmingham,Long-Board,Long-Boarding,Longboard,Longboarding,Longboards,Longbroading Group,Sport,Sports,West Midlands,Women Longboarders,women of colour,Women's Longboarding groupAn award-winning organisation based in Birmingham are looking for public support to get more women of colour into adventure sports by 2020. GirlDreamer is a Birmingham based company that provides a platform for young women of colour through digital skills, leadership programmes and adventure. Set up by two friends, Kiran and...Paul StringerPaul Stringer[email protected]AuthorI Am Birmingham
« Two Years On: Remembering the victims of the Grenfell Tower fire
Teenager pleads guilty to viciously murdering 18-year-old, stabbing him 15 times using “Rambo-style knife” »