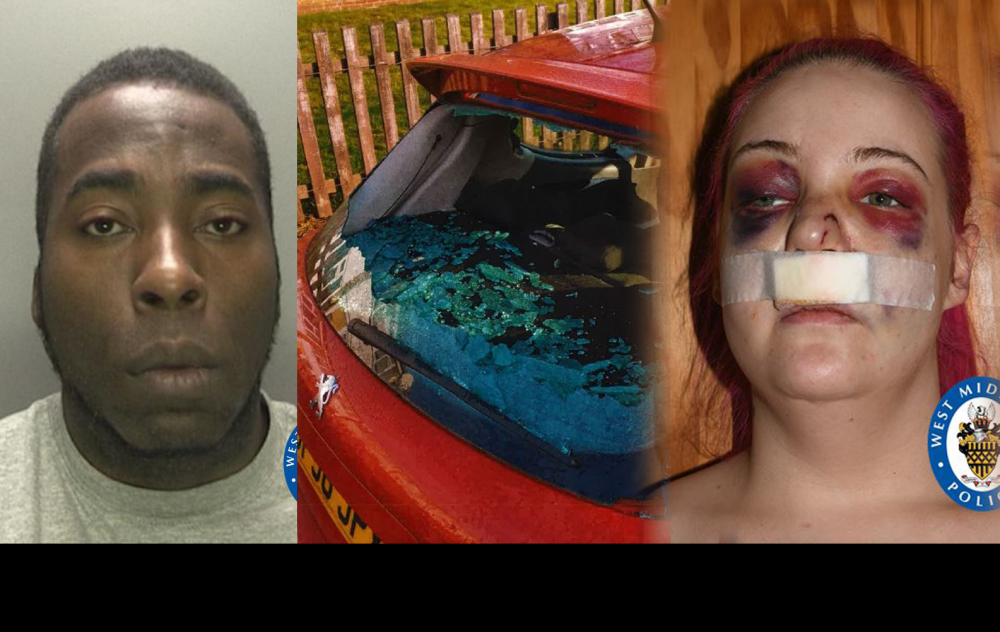 A domestic thug pushed his girlfriend’s head through the rear windscreen of his car − leaving her with multiple facial fractures − just hours after telling friends “I’d never hit a woman”.

**WARNING: There are images below you may find disturbing**

The 39-year-old punched her in the face before grabbing her head and smashing it through the back window of his Peugeot 207 − and as she lay on the ground continued the assault with kicks and stamps.

Hours earlier the pair were at a friend’s house when the conversation turned to domestic violence and led Thompson to claim he’d never hurt a woman.

However, Danielle reminded him how he’d previously slapped her in the face − almost breaking her nose − to the shock of others in the group.

The disclosure led to an argument on the drive home which culminated with Thompson’s shocking roadside attack.

Danielle later confided in hospital staff who alerted police and Thompson was arrested by West Midlands Police at Heartlands Hospital on the same morning.

In interview, unemployed Thompson claimed Danielle had broken the window with her bag and could offer no explanation for her injuries… even claiming she might have self-harmed.

West Midlands Police charged him with wounding and on Friday (13 Sept) he was jailed for eight years having been found guilty by a jury at Birmingham Crown Court.

Courageous Danielle, aged 27, has chosen to release disturbing images of her injuries in the hope it will encourage other survivors of domestic abuse to seek help.

She said: “He’d hit me about eight or nine times before. I’d been given a fat lip and bruises but each time the following day he’d always plead for forgiveness, cook me a meal and say how it’d never happen again. But it always did.

“Looking back I wish I’d left after the first time but my head was all over the place with mixed emotions. I wanted to believe in his promises and that he’d change.

“But there were times he’d also threaten me and even said he’d blow up my house if I ever told anyone about the abuse. Even on the night he told me to tell hospital staff that I’d been attacked from behind by a group of people.

“I couldn’t maintain the lie any longer, though, and realised I had to get help and get out of the relationship.

“In my experience the abuse and the violence will get worse. He has ruined my life, I’ve been diagnosed with PTSD and rarely leave the house now; it’ll be a long road to recovery.

“My advice to anyone suffering domestic abuse is to seek help at an early stage… don’t wait like I did or there is a risk you could be seriously injured or worse.

“There are lots of support groups and charities you can speak to, plus the police. I don’t think I’d have been able to get through everything had it not been for Clive (the investigating officer) and the support from his team.”

West Midlands Police Detective Constable Clive Leftwich, from the force’s Public Protection Unit, added: “The judge described Thompson as a danger to women. The horrific injuries suffered by Danielle are the culmination of a long suffering and violent relationship with Thompson. Danielle showed great bravery in speaking out against him and his eight-year jail sentence reflects the anguish and physical pain she’s endured.

“She is still suffering from the physical and psychological effects of the attacks. We all wish her well in her recovery.”

RESPECT is a group that can help identify the root causes of domestic abuse and work with perpetrators to change; they can be contacted at http://respect.uk.net or 0808 802 4040.