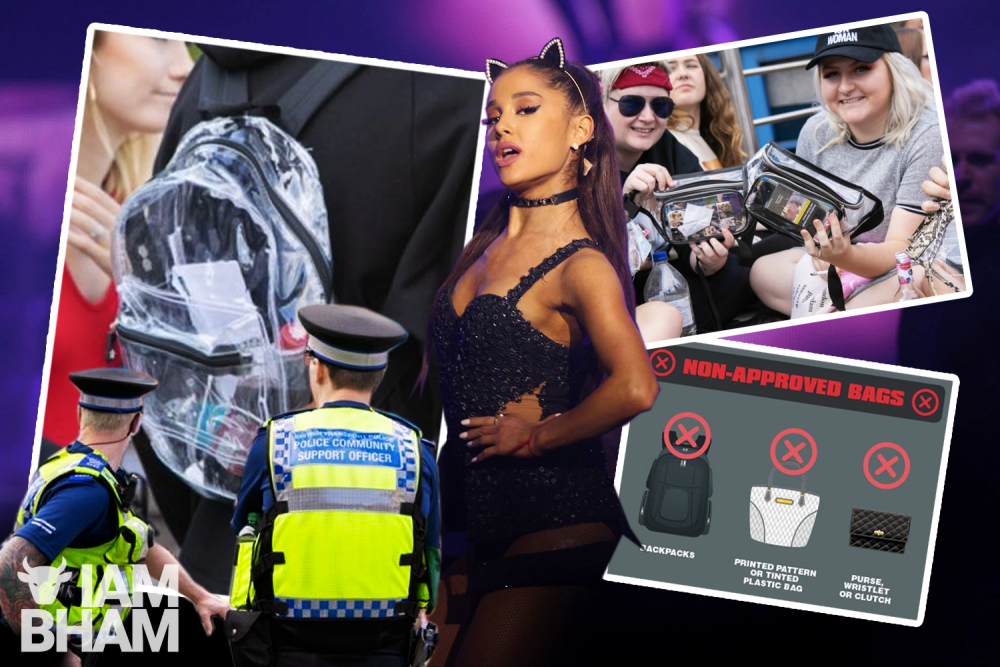 Security at an Ariana Grande concert in Birmingham was stepped up yesterday as airport-style security measures were enforced, demanding attendees reveal all their belongings in transparent bags.

Ticket holders for Ariana Grande were informed there would be new security measures taking place to increase safety at her concerts and were instructed to bring items in clear PVC or vinyl bags and a limit was placed on the size and quantity of what they could bring with them.

The rules were sent out to concert-goers ahead of the show with demands announced on a high airport security style poster.

Guidelines state that each person may carry one bag no larger than 12″ x 6″ x 12″, one gallon zip lock freezer bags were allowed and fans were also invited to buy a branded bag from the official LiveNation website, the promoter’s of Grande’s UK gigs.

As fans patiently queued at the Arena in Birmingham having followed the new measures of transparent bags, and additionally no cameras except those integrated into their smartphones.

Most concert spaces – including those in Birmingham – already have some form of security in place so basic measures were expected, but Ariana Grande’s shows have had to heighten procedures in light of the arena bombing at the artist’s Manchester concert in May 2017; which left 23 people dead and 139 wounded.

The tragic incident was the deadliest terrorist attack and the first suicide bombing in the United Kingdom since the 7 July 2005 London bombings.

While some fans opted for basic freezer bags, others found a way to make this more fashionable with transparent bumbags (fanny packs) and shoulder bags.

A number of fans attending the Ariana Grande UK shows have expressed concerns about the extreme security measures demanding transparent bags from young fans, especially teenagers who may be carrying much-needed personal items with them.

Attendees also complained about the rules leaving them feeling exposed and lacking discretion, with many citing sanitary products or medications being on show as infringing on their personal privacy.

One Facebook user explained on the event’s public Facebook page that she needed to carry an injection kit consisting of multiple items that have to be “clearly marked” in a “hard case”, noting that not much consideration had been given to a diverse audience and their needs when these rues were created and enforced.

There were also criticism of the impact of so many clear plastic bags on the environment, many of which may never be used again by people generally not comfortable with showcasing their personal property.

Ariana Grande’s Birmingham show is part of her global Sweetener World Tour, which ends its UK run in London on October 16.