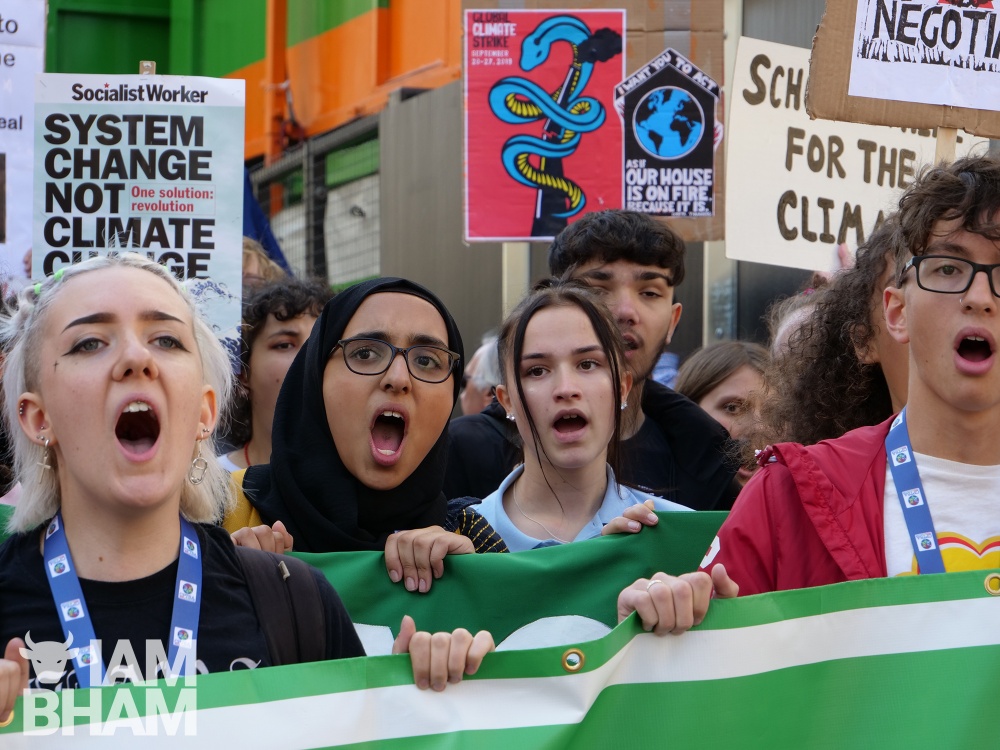 Birmingham has joined with other major cities across the UK in climate crisis demonstrations, as thousands joined school kids and students demanding for action on climate change.

Around 3,000 people in Birmingham join in one of the largest youth-led demonstrations in history, where millions of people from Sydney to Mumbai took to the streets around the globe on Friday. Their chants, speeches and homemade signs delivered the same ominous message to world leaders: do more to combat climate change — and do it faster.

The global day of action, calling for a reduction in emissions, was held in the run-up to a UN summit in New York.

Protestors gathered at 11:00am at Victoria Square, before marching down Colmore Row into Cathedral Square. They carried on down Cherry Street before looping onto Corporation Street, Temple Row, and St Phillips Place, before heading back to Victoria Square.

Thousands of people have been marching in #Birmingham today as part of global #ClimateStrike protests. pic.twitter.com/coZ4DhMBCx

A large majority of protestors continued down New Street towards the Bullring, while some protestors stayed at Victoria Square.

Over 200 demonstrations took place across the UK, with around 3,200 actions taking place globally. Protests were held in London, Edinburgh, Glasgow, Bristol, and Manchester.

London saw a rally near Parliament at Millbank, with speakers from climate justice campaigns as well as Jeremy Corbyn and environmentally progressive politicians.

Thousands of people have been marching in #Birmingham today as part of global #ClimateStrike protests. pic.twitter.com/2j8xc6opev

Friday’s school strike, which adults around the world were asked to take part in, is the largest mobilisation yet attempted by the youth climate movement launched last year by the Swedish teenager Greta Thunberg.

They came three days before world leaders gather at the UN for a much-anticipated climate summit. UN Secretary General António Guterres has insisted that countries bring with them resolutions of decisive action, such as reaching net zero emissions by 2050, cutting fossil fuel subsidies, and planning to reduce and replace coal-fire power plants.

Salma Yaqoob, a Labour candidate for West Midlands mayor, has been working closely with students to help plan the protest. She said while it was a “fantastic turn out” and called the demonstrations “inspirational” for the amount of young people that attended, more action needs to be taken to address the climate crisis.

She argued: “It’s actually disgraceful that they’ve had to take time out of their education to target adults and say ‘We need action now!’. We are in a situation of a climate emergency. We need major transformational change. We need a green new deal now.”

Demonstrators came far and wide to attend the protests. Jodie, from Belfast, said: “We’re having a really good time — lots of exciting solidarity here. So solidarity from here to you and all around the world!”

A few famous faces also attended the protest. Eddie Izzard, 57, declared that he was in full support of those striking in and around Victoria Square today.

He said: “I happened to just be playing in Birmingham this week , as I am on a world tour, so I am here to come and show my support.”

The young protesters are part of a generation increasingly vocal in demanding that leaders take climate change more seriously. The demonstrations came more than six months after hundreds of thousands of young people staged a similar coordinated effort.