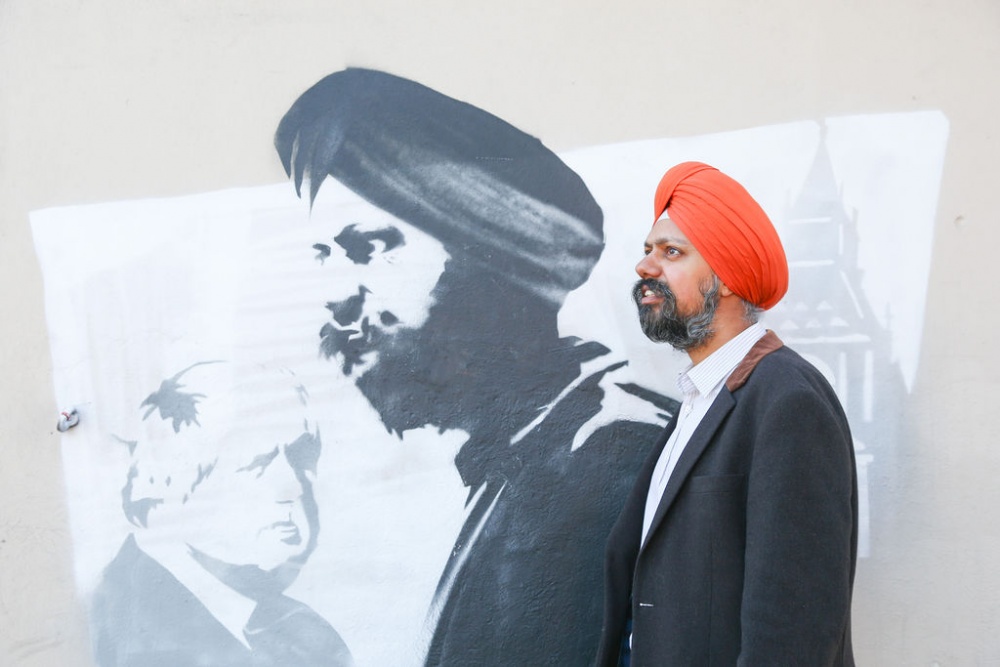 A topical work of street art has been painted on Soho Road, Birmingham. The spray painted stencil by Mohammed Ali depicts Boris Johnson and Labour MP Tanmanjeet Singh Dhesi during PMQs. Mr Dhesi visited Birmingham to see the art in Handsworth and have a chat with the artist.

Labour MP for Slough, Tanmanjeet Singh Dhesi hit the headlines recently with his passionate speech in Parliament when he challenged Prime Minister Boris Johnson during his first PMQs about his long list of alleged racist and xenophobic comments.

“For those of us who from a young age have had to endure and put up with being called names such as towelhead or Taliban or coming from Bongo Bongo Land, we can appreciate the hurt and pain felt by already vulnerable Muslim women when they are described as looking like bank robbers and letter boxes.

“Rather than hide behind sham and whitewash investigations, when will the prime minister finally apologise for his derogatory and racist remarks which have led to a spike in hate crimes?

“When will the prime minister finally order an inquiry into Islamophobia in the Conservative Party, something which he and his chancellor promised on national television?”

Birmingham-based artist, Mohammed Ali, who has created and shared his work at festivals and in cities around the world, including curating exhibitions, unveiled his new work on a wall in Soho Road, Handsworth.

Mr Dhesi’s powerful and heartfelt speech in Parliament inspired Ali to produce his latest art on the streets of Birmingham to highlight themes that are close to his heart.

Ali shared some thoughts with Mr Dhesi on social media about how his extraordinary speech in Parliament had inspired him : “I felt what you did, that moment had to be captured and preserved. Something we can all learn from and build upon moving forward.

“Too often things like this pass and we move on. This was my attempt to capture that moment in time so it can etched into the minds of those seeing today and in the future, be it on social media or physically in person as they sit in traffic.

“Your voice is one that reflects many of us regardless of colour, creed or faith. I stand with you to support the fight against bigotry and hatred.

“This was my attempt at preserving a moment in time that captivated much of the nation, especially those of us that would be described as being of immigrant background.

“We listened to a voice that trembled with anger, as you attacked power right at the heart and it gave every one of us, who may have experienced ‘inequality’ in life, some hope that there are people like you fighting the fight in such places.

“We stand with you brother.”

Mr Dhesi arrived in Birmingham to see the art and meet with Ali. They both expressed a united stance against racism and Islamophobia, and hope the new art will generate discussion and inspire people to challenge inequality.

Ali spoke to I Am Birmingham: “The artwork was painted in Soho Road, where a large part of Birmingham’s Sikh community live.

“I wanted to extend the act of solidarity by placing this artwork in such a neighbourhood.

“In this day and age it’s vital we must build alliances, where different communities join together to speak truth to power, be it through words on a public platform, or artwork on a brick wall.”