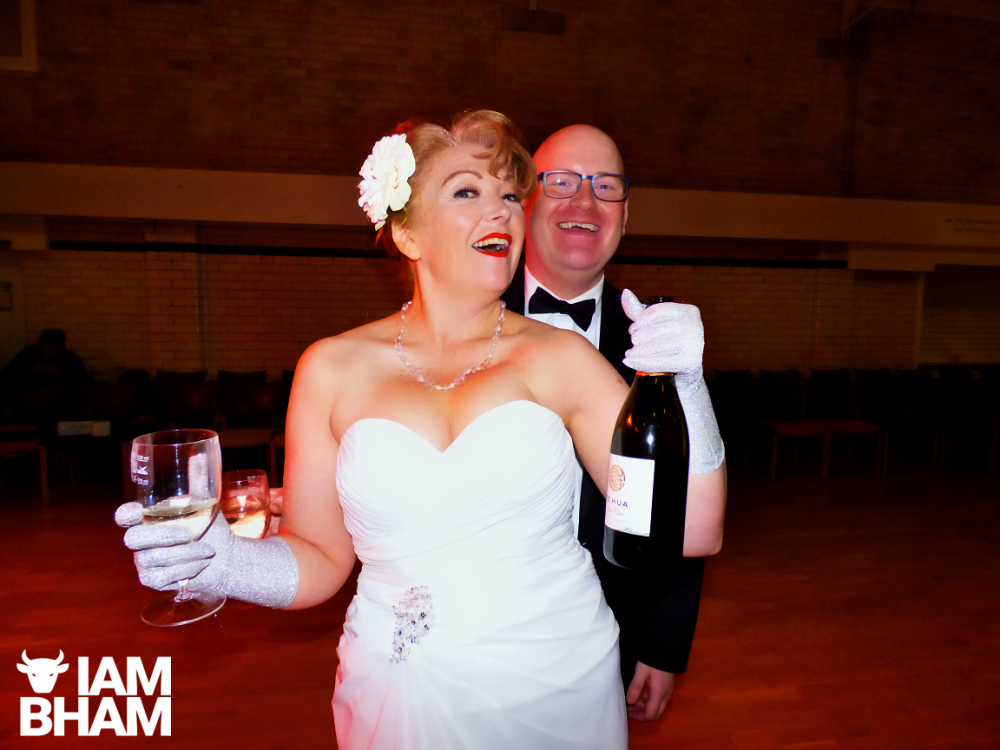 Midland Opera have a reputation for taking century old operas and transforming them for a modern audience. Previous productions such as Bellini’s ‘Norma‘ and Bizet’s ‘Carmen‘ proved to be both exciting and compelling, and the productions threw new light on aspects of these operatic works which are often glossed over by directors.

Director Sarah Helsby-Hughes manages to highlight some social and feminist themes in this production of ‘La Traviata’.

She throws a spotlight on how women get trapped, objectified, controlled, and owned by men, and any woman who dares to fight for her freedom and happiness is mercilessly judged, hounded and condemned by society.

The story of ‘La Traviata’ is usually treated in a frothy and bubbly way, with productions concentrating on the melodies and beautiful arias and producers piling on lush productions with a mass of dancers careering around a well-decorated stage with everyone dressed in opulent costumes. This ends up distracting the audience from the human drama and results in diluting the psychological undercurrents at the heart of the story.

Verdi’s story for ‘La Traviata’ is based on a play called ‘La Dame aux camélias’ which was taken from the novel by Alexandre Dumas fils.

The tale is set in Paris and deals with the love between Violetta, a courtesan, and Alfredo, a young nobleman. However, when Afredo’s father, Germont, hears about the love between his high born son and a ‘fallen woman’ he sets into motion events that will culminate in tragedy.

Sarah Helsby-Hughes (soprano) both directs this production of ‘La Traviata’ and sings the role of Violetta. Sarah embraces the role wholeheartedly and not only delivers a beautiful and sensual vocal performance but also fleshes out the dramatic aspects which results in the character of Violetta becoming more ‘real’ and warm.

This is not your usual ‘stand in one spot and sing’ type of performance.

Sarah acts out the role through her body language and the emotion in her eyes is relayed to the audience in the intimate setting of the theatre-in-the round space at Stirchley Baths.

The intensity of emotion and psychological depth which Sarah invests into her performance fuels the melancholy that wracks through the body of Violetta.

Sarah displays the transformation of Violetta’s character in a convincing manner. Her initial suspicions that Alfredo may be another lovelorn admirer who hungers after her is later replaced with warmth and affection as she realizes his intentions are sincere.

Her vocal range encompasses this emotional curve as her happiness at finding love is later crushed by Germont and his moralistic crusade to salvage his family’s dignity and social standing.

Sarah also conveys the betrayal that she has endured at the hands of the previous men in her life who have manipulated and abused her trust.

This is a woman who has finally found the strength and courage to stand up and fight for her love and happiness in a world run, ruled, and operated by men and their base desires.

The tragedy which Verdi projects so powerfully in this opera is how Violetta is ultimately destroyed by a heartless society which allows very little breathing space for women. Sarah brings this theme to the fore in the way she sings and acts out the role of Violetta in this courageous production.

Richard Belshaw (tenor) sings the part of Alfredo and, as he proved with ‘Norma’ when he sang the role of Pollione, he throws himself into the character with gusto and passion.

His characterisation went from an initially hesitant partygoer in the opening of ‘La Traviata’ to full out centre-of-attention as his jealousy got the better of him towards the poignant climax of the opera.

John Kiefert brings a genuine sense of parental anguish to the role of Germont, a father trying to ‘rescue’ his son from a life of decadence and from a love which he perceives to be sinful.

His bass-baritone vocal range shifts from a judgemental dark timbre when he first confronts Violetta and later transforms to a low sweet tone as he realizes the heartache he has caused to Violetta in the final scenes of the opera.

The part of the jealous Baron who comes between Violetta and Alfredo is sung by Michael Lam who performed the lusty role of Escamilio in a very virile and electrifying manner in Midland Opera’s ‘Carmen’.

Once again Michael dominates the stage and shows vocal prowess. His physical movements slow and calculated like a tiger during a hunt.

During the gambling scene Michael’s visage became almost demonic as he channelled the Baron’s character through his intense combination of singing and acting.

The mezzo-soprano role of Flora – Violetta’s friend – is performed by the beguiling Tina Fung who takes centre stage in several key moments of the opera.

She walked with a captivating confidence and purpose, waving around her fan, and wore her Venetian carnival mask with an alluring sophistication.

Tina’s vocal and dramatic skills mark her out as an artist to keep an eye on in future opera productions.

James Longstaffe conducted the orchestra with a deft hand that drew out the pulsating sounds and passionate melodies of Verdi’s score while also highlighting the delicate emotions at the heart of the opera.

The acoustics at Stirchley Baths brought a dynamic range to the warm sound of the orchestra which blended effortlessly with the passionate singing by the principal singers and chorus.

The Midland Opera Chorus once again rose to the occasion and not only produced an exciting range of vocal colours but also managed to convey the mirth and raucous atmosphere during the ballroom and gambling scenes.

The minimalist production designs and sets drew the attention back to the drama in a very powerful manner.

The intimate setting of Stirchley Baths allowed the opera to be enjoyed in a manner that is not possible in an opera house where the gap between the stage and seating places distance between the audience and the performers.

At Stirchley Baths the audience are within touching distance of the singers. This allows for a level of intimacy that is very rare indeed and generates a more immersive experience. Every vocal nuance and dramatic facial expression could be seen and heard in a very powerful manner.

At a time when most classical and operatic productions are priced out of the range of many families it is very encouraging to see Midland Opera reach out to children.

Sarah talked to I Am Birmingham about an exciting new initiative which will be good news for families with children:

“We are offering free children’s tickets for the first time, as we believe families should be able to experience live theatre affordably.”

This production of ‘La Traviata’ returns Verdi’s emotionally charged opera back to the human drama and passion at the very heart of the opera. Midland Opera once again demonstrates the power and grace of the opera artform to engage the heart and mind, and to take the audience on a journey that will entertain and also enrich them. Sarah Helsby-Hughes and the team at Midland Opera have delivered a version of ‘La Traviata’ that makes you see the work in a dramatic and passionate new light.

‘La Traviata’ will be performed on Friday 22nd November at 7:30pm at United Reformed Church in Sutton Coldfield.