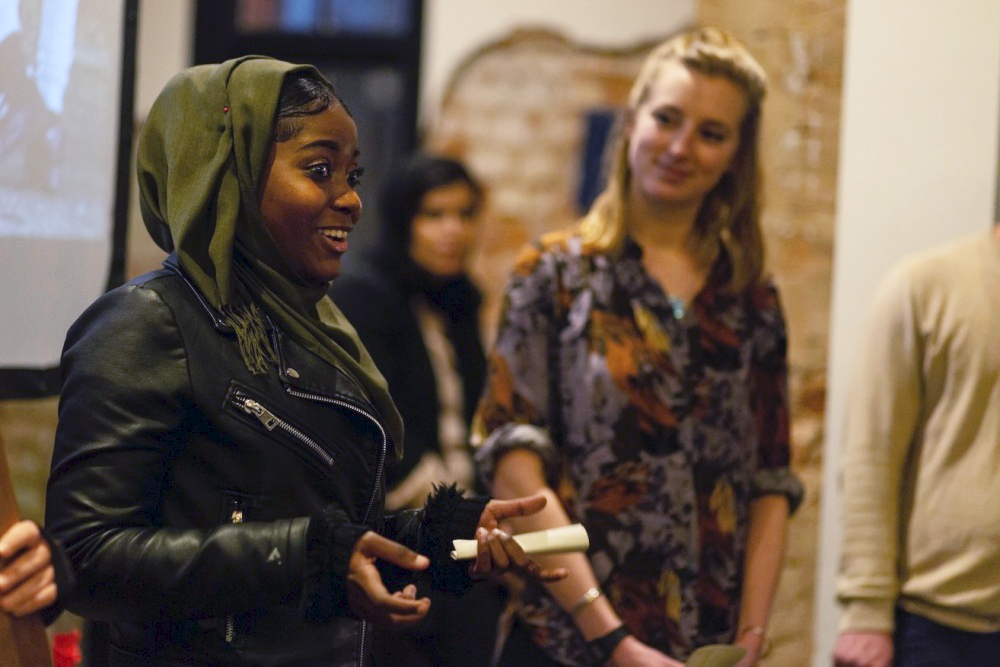 Birmingham refugee Mirfat at the International Day of the Child film screening at the Ikon Gallery (Photo: Paul Stringer)

The film screening was hosted by the young refugees themselves, after a workshop with Flatpack gave them all the skills they needed to organise their own film event.
​40 people gathered at Yorks Café in Birmingham yesterday to learn about the stories that the young people had to share. Up to 20 of the 16-20 year olds worked on the making of the films this year in collaboration with youth empowerment organisation UpRising.​
​
The short films covered a plethora of issues and topics that young unaccompanied refugees and asylum seekers face, such as the asylum process, no right to work and family separation. ​
.
Mirfat, 18, one of the young refugees from Somalia said: “I want people to understand our journey and the problems and our struggles. At Surviving to Thriving it’s nice, especially for young asylum seekers ad refugees because we all came from different places, but we’ve got the same experiences, so we all understand each other.”​
​
Yasmin Millican, Engagement Officer for Surviving to Thriving said: “Children and young people who find a way to escape conflict and persecution to travel to the UK without their parents have already demonstrated incredible resilience and strength.
.
“Many of them continue to face challenges once they arrive here, and it’s our duty to help them realise the power they have to overcome those obstacles. Through making and showing the short films, these young people have found a vehicle to express themselves and raise their voices – it’s up to us now to listen!”​
​
The first half of the films explored how it felt to have your age disputed by social services, accessing education and feeling powerless in the asylum system. The second half of the event showed films that envisioned the young people’s hopes and dreams for the future.​
​
This was followed by a discussion panel and a Q&A where the audience members asked questions and gave feedback. ​
.
​

One audience member, Sadiq, 27 said: “What drew me to this event was that I wanted to know more about the experiences that refugees have had, but it’s hard to ask personal questions on a night like this. It’s nice to see everyone having a good time, and these films told their story for them.”​

Mirfat shared her own goals for the future with the crowd.

She said: “My ambition is to be a pilot. Education means everything to me because there are lots of opportunities in this country to try and achieve your dreams – and if you didn’t achieve them, you tried.”​

​The short films also raised awareness of some of the unseen struggles that young refugees and asylum seekers face in the UK in particular, such as prejudice and no right to work.

​Another audience member, Shakia, 21 said: “I didn’t know that if you weren’t registered with status you couldn’t work for a year, or that even after that you would only be able to get a specialised job. If you’ve come here as a child, you’re not going to be able to do any sort of specialised job without the experience.”​

Amy Smart from Flatpack Festival, who supported the film screening, said:
.
“We believe cinema is for everyone, it has the power to change hearts and minds and films are a brilliant way to start a conversation or break down barriers.
.
“Our Build Your Own Film Night workshops give young people the skills and knowledge to host their own film events and gives them a voice. The event was a hit with audiences and we hope to bring the group back to curate an event for Flatpack 2020, watch this space.”
.
​Ruzina Begum, project co-ordinator for Surviving to Thriving group in Birmingham said:
.
“The young people did an amazing job of planning and delivering the film night event.
.
“They were so confident in speaking in front of the audience and explaining why it is so important to do events like this and show their films. I’m so proud of them.”​
.

You can watch the entire series of short films made by UpRising / Surviving to Thriving here.