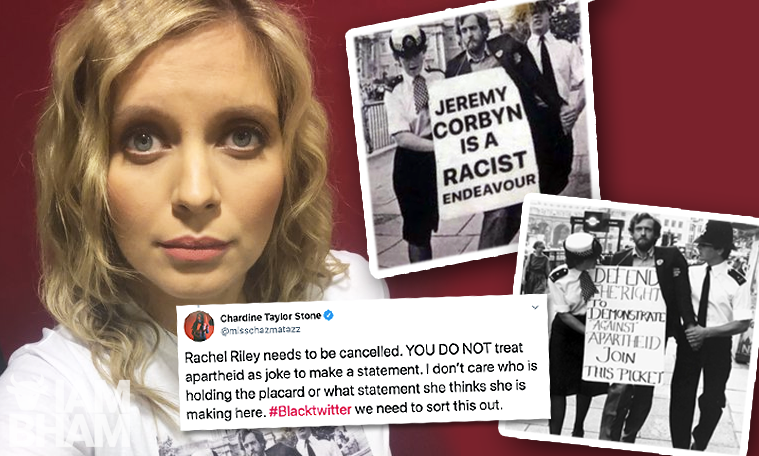 Rachel Riley – co-presenter on Channel 4 show Countdown – is facing calls to be sacked after she edited a photo of Jeremy Corbyn at an anti-apartheid protest to suggest the Labour leader was “racist”.

The controversial TV personality is under fire from both supporters and critics of Corbyn after posting an image of herself wearing a t-shirt emblazoned with the negatively photoshopped picture of Corbyn, on which the Labour leader is seen being escorted by two police officers with a placard hung from his neck that reads: “Jeremy Corbyn Is A Racist Endeavour.”

The doctored image has been edited from an original photograph which pictured Corbyn being arrested at an anti-apartheid protest in London in 1984, during his first year as an MP. The original placard read: “Defend The Right To Demonstrate Against Apartheid Join This Picket.”

Riley shared the snap of her wearing the t-shirt on Twitter on Tuesday, ahead of Jeremy Corbyn taking part in a TV debate with PM Boris Johnson, which was being broadcast from the same studios where Countdown is filmed.

Her tweet was accompanied with the word: “I didn’t feel comfortable knowing my workplace was to be full of racists tonight. I don’t endorse Boris, but I do endorse #NeverCorbyn.” A member of the Jewish community and a long-term critic of Corbyn, she also wore a neck chain displaying the Star of David.

Although Riley has attempted to justify her stunt by claiming the anti-apartheid group Corbyn campaigned with wasn’t  “mainstream”, the seemingly ill-judged stunt has prompted an angry response, especially from black activists and those associated with the anti-apartheid movement.

He tweeted: “As a former MP under Nelson Mandela, as the son of a Holocaust survivor who lost 39 members of her family in the camps, as a Sth African anti-racist, I find what Rachel Riley has done offensive, appalling & deeply repugnant.”

Black activist Chardine Taylor Stone hit out at Riley, stating: “You do not treat apartheid as joke to make a statement.” Others accused her of having a “twisted agenda,” by smearing Corbyn as a racist, “while simultaneously erasing apartheid history.”

An online petition on Change.org – which described Riley’s actions “to weaponise the fight against racism in such a manner is abhorrent and clearly counter intuitive” –  has so far reached over 2,600 signatures with a target of 5,000.

The petition description continues: “Had this been a single lapse in judgement an apology would possibly have been an adequate response. However the persistent and unhealthy campaign based on clearly unsubstantiated claims means that Mrs Riley’s position working for your organisation is now untenable.”

Since pulling the stunt, 33-year-old Riley has been unceremoniously dragged by the Twittersphere, with many mocking her photoshop skills with their own satirical versions of her doctored image. Although Katie Hopkins was spotted coming to Riley’s defence, claiming a “Labour Muslim mob” was out to get her. Charming!

Here’s some highlights of Rachel Riley getting rinsed for her controversial stunt:

As someone who is both black and Jewish I’m really hurt that @RachelRileyRR thinks it’s acceptable to deliberately erase the struggle against apartheid. If she thinks that only the Jewish part of me needs protecting, then she is not an anti-racist. @Channel4 collect ya girl https://t.co/D0HcTcQFje

Is this person for real? I knew she was anti-Corbyn but to wipe out a whole piece of (very important) apartheid history is just vile. Whatever you think about Labour/Corbyn this is just unacceptable #sackrachelriley pic.twitter.com/t1VmIyWUml

Personally I don’t see a problem with the t shirt #RachelRiley wore pic.twitter.com/8ije3EuAqz

I'm a black activist, and I've never heard your voice on the issue of anti-black racism in over 40 years on the front line struggle against all forms of racism, including antisemitism. Very few white women, understand the dynamics of racism, and you appear to be Queen among them.

Generally I find that if Katie Hopkins supports an action that said action is bad. So, uh, hope Rachel Riley enjoys that endorsement.

I hope Rachel Riley didn’t blow her whole budget on those Corbyn shirts, she’s got something else I hope she’ll be adding to her Fall/Winter collection https://t.co/H0rEF9mLrf

It requires constant repetition that Rachel Riley is a human calculator. She can do sums really well. She isn't an intelligent person. In fact she's thick as shit but desperate not to pay more tax. That's it. https://t.co/PUhUvTr6yo

I would tend to express any opinion based on facts. Why does Rachel Riley choose not to do so?

Rachel Riley needs to be cancelled. YOU DO NOT treat apartheid as joke to make a statement. I don’t care who is holding the placard or what statement she thinks she is making here. #Blacktwitter we need to sort this out.

Wikipedia: Rachel Annabelle Riley is a British television presenter and mathematician. She is well known for demonising Jeremy Corbyn…with claims of anti-semitism against him whilst actively promoting racism herself. Gas. #RachelRiley

Rachel Riley turned from pleasant person to monster. Okay, it's not nice 'fighting racism', but she seems to have been taken advantage of, much to her detriment.