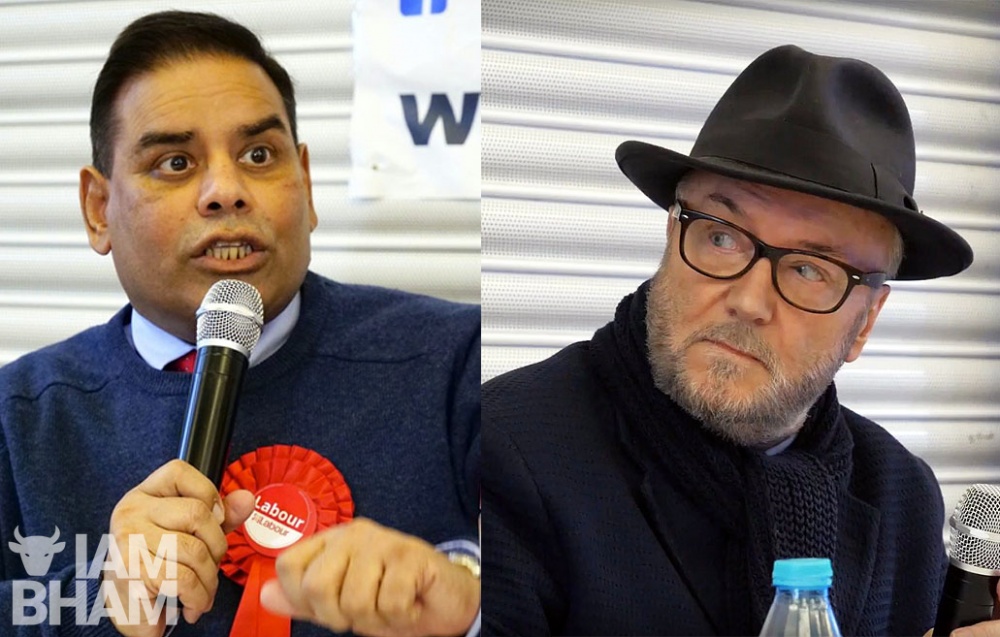 George Galloway and Khalid Mahmood had a heated exchange during a political hustings in Birmingham (Photo: Adam Yosef)

Controversial politician George Galloway locked horns with Khalid Mahmood in Birmingham at a General Election hustings on Saturday, in an exchange that ended with Galloway leaving the room and Mahmood demanding he stay to finish the discussion.

Firebrand former Labour and Respect MP Galloway and Perry Barr’s Mahmood were taking part in the hustings ahead of the upcoming General Election.

With polling day on Thursday (12 December), the political heavyweights were supposed to be taking part in a Q&A panel chaired by Charmaine Burton, presenter of the ‘Different Anglez’ current affairs show on the host station.

In a brief but heated exchange, Galloway accused Mahmood of supporting the war on Iraq and subsequent deaths during the UK and US invasion of the Middle eastern country, which Mahmood denied.

“I’m glad Khalid came along to speak about bendy buses,” announced Galloway. “Because I remember when he entered Parliament in 2001, just in time to vote for to proselytise for, in the pages of The Observer and elsewhere, the slaughter of a million people in Iraq; and the very idea that election should be reduced to a discussion about the bendy bus is really quite brazen.”

“You know I didn’t vote on that, you know that!”

To which Galloway responded: “I read your article, you defended the war in Iraq. As a matter of fact, somebody else wrote it for you but it appeared in The Observer in your name defending the slaughter of a million people in Iraq, and you wan to talk about bendy buses? You’re having a laugh!”

After Galloway walked out of the hustings, Mahmood told the audience:

“George knows exactly what happened on that vote. I’m sorry he had to run off. If he had the courage of his convictions, I was here totally to address the meeting for the next two hours if needed to take, I was here to stand my ground.

“Unfortunately, he ran off with a tail between his legs because he knew he could just say the argument that he was trying to make. It’s unfortunate for people like him, going around the whole of the country carpet-bagging, thinking they can stand anywhere without any connection to the constituency and that’s not right.”

Representatives from all of the main political parties were in attendance at the public event, which was taking place in Winson Green which falls under the Birmingham Ladywood constituency. While representatives from all of the main parties stayed until the end of proceedings – which were being aired live on New Style Radio 98.7FM – Galloway left after the first question.

Although the politician and presenter’s team had clarified he would leave early and Galloway himself apologised before speaking, there was some confusion amongst organisers as to how long exactly he would be at the event.